Andrea R. Jain bemoaned how a "growing number of individuals and institutions oppose yoga, and actively encourage fear of it" in a Thursday item on Quartz, an online magazine from the parent company of The Atlantic. Despite passing mentions of opposition from evangelical Christians, such as Southern Baptist leader Albert Mohler, the Indiana University-Perdue University Indianapolis professor devoted the bulk of her attention on high-profile "yogaphobia" in the Catholic Church.

NPR tried to portray evangelical scientific and theological scholars who no longer believe in the Book of Genesis's account of Adam and Eve as "conservative" on Tuesday's Morning Edition. Host Steve Inskeep used this bizarre label, while correspondent Barbara Bradley Hagerty cited a theology teacher who denies the fall of man into sin as an example of one of these "conservatives" who "want their faith to come into the 21st century."

After Inskeep's introduction, which also noted how "for many evangelicals, a historical Adam and Eve is a critical part of their theology," Hagerty almost immediately turned to Dennis Venema of Trinity Western University in Canada and asked, "How likely is it that we all descended from Adam and Eve?" He replied, in part, "Not likely at all."

A Baptist preacher calling a sinner to repent and trust in Jesus Christ for salvation is hardly news. Except, perhaps, when it's done via Twitter.

The media don't get religion, often portraying intra-denominational struggles within American Protestant churches through a purely political lens, rather than as substantial debates touching on the core tenets of Christian doctrine or ecclesial discipline. What's more, in this political narrative, conservative defenders of Christian orthodoxy are invariably the bullies.

A recent example of this comes in the form of an April 30 New York Times obituary for "Cecil Sherman, Who Led a Faction of Moderate Baptists" within the Southern Baptist Convention.

Times writer Douglas Martin painted Sherman as a reluctant leader of a "moderate" faction that organized itself in a purely defensive posture against conservatives intent on "taking over" the denomination (emphasis mine): 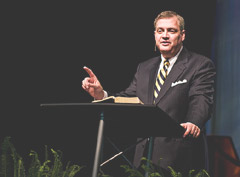 A Sarasota, Florida, doctor recently lost his medical license on the basis of an error he made in 2006 in an abortion procedure where he mistakenly took the life of the healthier fraternal twin of a boy diagnosed in utero with Down Syndrome.

In covering the story, most media outlets have noted that Dr. Matthew Kachinas aborted "the wrong baby."

Baptist theologian and radio program host Dr. Albert Mohler took the airwaves on his April 19 program to discuss both the case in question and the media's coverage thereof.

Here's what he said about the latter at the opening of Monday's program:

Last week I saw a news story that simply stopped me in my tracks, and I wrote about it at AlbertMohler.com, an article entitled, "Aborting the 'Wrong' Baby?" There's a question mark at the end of that question. It has to do with a news story that came out of Florida.

Dr. Matthew Kachinas had been stripped of his medical license last week by a Florida medical review board for -- and this is how the media discussed it -- for aborting the wrong baby.

The late Dr. Yury Verlinsky, a scientist "who developed a technology that allows a search-and-destroy mission on human embryos" was heralded by the New York Times recently as a man who helped childless patients conceive healthy babies.

"What I want to note... is not so much the man and what he did, but the way the New York Times explains this," Mohler told his audience, adding:

Perhaps the New York Times is just predestined not to get religion.

Taking on Calvinistic preacher Mark Driscoll's brand of Reformed theology, writer Molly Worthen -- herself a graduate of a formerly Puritan university -- gave readers of the New York Times magazine a skewed picture of what exactly the evangelical pastor's theology teaches about sin and redemption.

In her January 6 article, "Who Would Jesus Smack Down," Worthen -- who studied American religious history at Yale University-- portrayed the founding pastor of Seattle's Mars Hill Church as an edgy hipster "cussing" pastor who chagrins religious conservatives and liberals alike, all while confounding evangelicals with his Calvinistic take on biblical theology.

While there is a grain of truth to the characterization of Driscoll* having critics to his left and right, Worthen betrays her ignorance about Calvinism, starting in the third paragraph of her article (emphasis mine):

Update (11:37 a.m. EST): Miller is now on the radio program. She insists she had a radio show scheduling conflict. Ingraham apologized for saying she chickened out.

A few minutes from now Newsweek's Lisa Miller will appear on the Laura Ingraham radio program to defend her recent article that insists the Bible can reasonably be interpreted to defend same-sex marriage. Shortly after she goes toe-to-toe with Ingraham, the radio host will feature Baptist theologian Albert Mohler who will offer a full-fledged rebuttal. Apparently she refused to go on the show at the same time as Mohler.

Find Laura on a radio station near you using her station finder page here.

For a taste of Mohler's arguments, see his December 8 critique of Miller, "Turning the Bible On Its Head."

Shortly before 11 a.m. Eastern time, Mohler posted the following to his Twitter page:

Newsweek is hardly the only MSM publication that is clueless about the Christian faith. The New York Times is also reliably feckless when it comes to reporting on what makes biblically orthodox Christians tick.

Southern Baptist Theological Seminary president Albert Mohler took the Gray Lady to task last Friday for its reporting on the recnet formation of a new coalition of Anglican churches that have broken off from the liberal Episcopal Church USA over concerns of doctrinal liberalism.

In "It's About Theology, Not Territory," the Baptist theologian and pastor lamented that Laurie Goodstein's December 3 story on the formation of the Anglican Church in North America painted the dispute in a way to portray the liberal ECUSA as an aggrieved victim of dogmatic conservatives. By contrast, Mohler points to a lack of doctrinal clarity in the Anglican Communion being the fertile ground by which liberals were able to erode the boundaries of historic, orthodox Christian teaching and thus threaten the unity of the church around the Gospel of Jesus Christ (emphasis mine):

At Smith College, it was a few dozen student activists screaming, chanting and banging pots and pans.  With the American Psychiatric Association, it was angry letters from adult activists and bitter stories in the homosexual press.  The bottom line is the same: far-left homosexuals successfully intimidated a few cowardly officials and silenced voices they don't want the public to hear.

Not a bad way for neo-Marxist ideologues to celebrate May Day, but you'd think America's watchdogs of liberty, the free press, might raise an objection.  Sadly, the liberal media haven't written a word about either story.