GMA's Diner Discussion: No Bush Support or Fear of Dems at the Counter 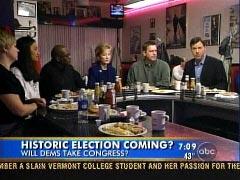 Monday’s 'Good Morning America' highlighted anti-GOP sentiments from the American heartland during a report in the 7am half hour. Reporting from a diner in Columbus, Ohio, ABC’s Jake Tapper had assembled a group of five "real-life actual voters" to discuss the upcoming midterm elections. Amongst the group of voters in Tapper’s panel: a Republican voter voting Democratic this year; a Democratic Navy veteran who had been against the war;  a conservative Christian eager to express "I'm not pro-war"; a new U.S. citizen who believes that illegal immigrants are being treated unfairly; and a cynic who believes that the whole political system is corrupt. Not one of the voters expressed support for the President or Republicans. Furthermore, none of the panel members, except for the cynic, expressed any reservations about a potential Democratic takeover of Congress.

Some highlights from the panel discussion:

Tapper: "You're a Republican voter, but the war in Iraq, among other issues, has you thinking that you might vote Democratic this year. Why?"

Larry [no last name given; Republican voter]: "...I think we're in the wrong place, and I just think it's time for a change, someone who can help us and get out of the quagmire we have."

Tapper: "Now, Kenny, you disapproved of the war from the beginning and you're, you're a Navy veteran...But, you have an issue with the fact that you think that those who have questioned the war, their patriotism has been challenged, right...You're an independent voter. But what struck me was that you said that you don't think, even though you think that there's a lot of corruption amongst the Republicans controlling Congress, you don't think that it's necessarily going to be any different if the Democrats take control. Why is that?"

Before turning to his panel, Tapper pointed out all the challenges facing the GOP this cycle:

Tapper: "War is hell for soldiers, but also right now for the Republican party. A majority of voters disapprove of how President Bush and the Republican Congress have handled the Iraq war. While some argue that Iraq is part of the war on terror and a national security issue, many Americans do not see it that way. The economy is a mixed bag this year. Unemployment and inflation are low and the Dow Jones average is high. But most voters say they personally are not getting ahead. It's economic insecurity. There is significant disapproval for the Republican Congress now, even among Republican voters. Not helping matters, scandals involving powerhouse lobbyist Jack Abramoff and the creepy Internet habits of Mark Foley."

A full transcript of Tapper’s discussion with the Ohio voters follows:

Tapper: "You're a Republican voter, but the war in Iraq, among other issues, has you thinking that you might vote Democratic this year. Why?"

Larry [no last name given; Republican voter]: "It's because we've been so bogged down on Iraq. I agreed with the war when we initially started it. Now we have no exit plan. I think we're in the wrong place, and I just think it's time for a change, someone who can help us and get out of the quagmire we have."

Tapper: "Now, do you think that the Democrats have a plan to get us out of the quagmire or is it more just the idea that something needs to change?"

Larry: "Something needs to change. I don't believe we have a plan. Initially, we had the whole Colin Powell thing with the WMD's, where is everything and we're just a ship without a sail at this point."

Tapper: "Now, Kenny, you disapproved of the war from the beginning and you're, you're a Navy veteran."

Tapper: "But, you have an issue with the fact that you think that those who have questioned the war, their patriotism has been challenged, right?"

Kenny: "Yeah, I believe that. First of all, I used common sense before we even went in. I, I never did think that it was a threat. We had him bogged down for twelve years. And if you speak out, I mean, they went out to everyone who spoke out against the war, and it's not against the President or anything. It's against the policies of the war. And he, the administration says, well, we're, we're going to march to victory. Well, who're we going to win? What's the victory? Define victory for me. You know, you got Sunnis and the Shias fighting over there. So, what side do we take?"

Tapper: "And that's an issue that's very important to you when you go to the polls?"

Tapper: "Diana, tell me, you, you see it a little differently. You, you think we should, we do need to stay the course to a degree in Iraq?"

Diana Wetzel: "Well, I don't have--I don't think it's possible for us, as individuals, to even understand all of the issues that are going on. There's a lot--there's been some deception. You know, and as, as voters, it's hard to know exactly, you know, what it is we're voting on. You know, I'm not pro-war. I have a 17-year-old son. I don't want to see him shipped off to war. I do think there are some things that are worth fighting for and terrorism is a threat. How we approach that, I think, maybe has not been done as well as it could be."

Tapper: "Now, I've got to tell you a little secret, Diana. Republican officials in Washington are very concerned about, well, you, Kenny and, also, I mean, you, Larry, but also you, Diana, because you're a Christian conservative and they're very worried that people like you, who have been loyal Republican voters in the past, either might not vote Republican this year or, more importantly, might be so disappointed with what's been going on in Iraq and in Washington, that you might not vote at all. Do they have reason to be concerned?"

Wetzel: "I intend to vote. I intend to exercise my right to vote. I have talked to some people who are disenfranchised to the point where they might be thinking in those terms."

Tapper: "And what are they upset about?"

Wetzel: "I think it goes to integrity issues and how much the polls have become such a, a mighty force and, you know, everybody wants to know what we think and then they want to tell us, you know, to cater to that and that's not what we're looking for. We want integrity."

Tapper: "Lily, I want to congratulate you, because you're actually going to be going to the polls for the first time since, since becoming a citizen. But it must be a strange election, because you've heard a lot of rhetoric on both sides of the aisle about illegal immigrants that, that has upset you. Tell me why."

Tapper: "But, Lily, you came here legally. Doesn't it bother you all the millions that have come here illegally?"

Olson: "Yes, I am legal. But I'm, I'm still immigrant. And I am just here, you know, I think right now I'm representing the Hispanic community. Doesn't matter where you're from. Like, I'm a Mexican, but, you know, other people from other countries came, too. I believe they need to--we need to hear those person, what they think. You know, they, they, they need to think like that more that those other persons is not numbers and those numbers are helping, too."

Tapper: "Okay. Kate, what's, you know, you're an independent voter. But what struck me was that you said that you don't think, even though you think that there's a lot of corruption amongst the Republicans controlling Congress, you don't think that it's necessarily going to be any different if the Democrats take control. Why is that?"

Tapper: "So the scandals, even though they've been--there've been a lot of them in Ohio for Republicans and in Washington with Republicans, you, you think that the Democrats, if they take control, there are going to be Democratic scandals as well?"

Tapper: "All right, there you go. The voice of the people, vox populi. Thank you all so much for joining us early on this morning. Enjoy your breakfasts."

There are "going to be" Democratic scandals? What about the bribery investigation into the dealings of Congressman William Jefferson? Tapper himself has reported on the scandal surrounding the Louisiana Democrat. Between that investigation, and Harry Reid’s sketchy ethics reports over a land deal he made, it should be obvious to Tapper that the Democrats do not need to "take control" of Congress before the stench of corruption takes hold.