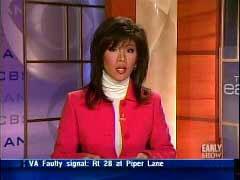 Julie Chen, co-host of CBS’s "Early Show," was more biased than the New York Times in reporting on a new global warming study conducted by the British government. Chen highlighted the inflammatory claims of the study, citing that it concludes "global warming will devastate the world economy on the scale of the World Wars." Yet, the New York Times, in its coverage of the report, did not note this claim, and even quoted an expert who called the study "a bunch of guesswork."

Chen classified this research as a "wake up call" and reported that British Prime Minister Tony Blair thinks emissions need to be cut, an allusion to the media line that humans are responsible for global warming. But, the science is far from conclusive that global warming is a manmade phenomenon as opposed to one that occurs naturally. But, then again, this would not be the first time CBS has sensationalized "man made" global warming while ignoring contradicting studies (click here and here for examples).

Julie Chen: "And a wakeup call about global warming. A study by the British government concludes that global warming will devastate the world economy on the scale of the World Wars. Prime Minister Tony Blair called for decisive action now."

Tony Blair, British Prime Minister: "If the science is right, the consequences for our planet are literally disastrous."