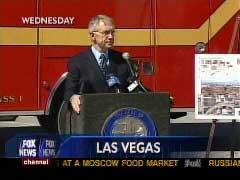 As they did on Thursday, ABC, CBS and NBC again this morning (Friday) omitted any reference to Senate Democratic Leader Harry Reid’s evident failure to properly disclose $1.1 million land deal (although all three programs broadcast updates on the two-week old Mark Foley scandal). So far, the only broadcast network coverage has been a benign 30-second mention on Thursday’s NBC Nightly News.

One new development skipped by the networks this morning: an editorial in the liberal Washington Post spanking Reid for showing “a casual disregard” for following the ethics rules, and declaring Reid’s claim that his transactions were “transparent” were “transparently wrong.” The networks usually aren’t shy about telling viewers when a conservative editorial page condemns a conservative leader, but they’re apparently uninterested in the liberal Post’s scolding of Harry Reid.

Today’s Las Vegas Review-Journal pointed out that Reid was actually serving on the Senate Ethics committee at the time of the undisclosed transactions, and that his financial disclosure forms were prepared by Claude Zobell, once Reid’s chief of staff.” Tagged at the end of the news story is the interesting disclaimer that Claude Zobell “is the brother of Charles Zobell, managing editor of the Las Vegas Review-Journal.”

Does that family connection perhaps explain why the former Reid staffer who “who expressed concern the deal hadn't been properly reported” decided to blow the whistle to the Associated Press, not the hometown newspaper? Another angle that the big broadcast networks seem uninterested in pursuing.

In their op-ed this morning, the Washington Post suggested Reid was probably more sloppy than corrupt, but lectured that Reid had failed in his “essential” duty of properly disclosing his financial affairs. An excerpt:

The best case for Senate Minority Leader Harry M. Reid (D-Nev.) is that he was sloppy about financial disclosure rules in accounting for a real estate deal on which he made a $700,000 profit. The more unattractive case is that the senator's inaccurate description of the investment was an effort to disguise his partnership with a Las Vegas lawyer who's never been charged with wrongdoing but whose name has surfaced in federal investigations involving organized crime, casinos and political bribery since the 1980s. As of now, the evidence points toward sloppiness; Mr. Reid's friendship with Jay Brown isn't exactly a secret in the state. But either way, an Associated Press report about Mr. Reid's dealings doesn't cast the senator in an attractive light. Neither does his response to the AP story, which indicates a casual disregard for the importance of accurate reporting of lawmakers' financial affairs....

Mr. Reid's professions of transparency and full disclosure are transparently wrong. His investment was not reported in a manner that made clear his partnership with Mr. Brown. It's true — under the inadequate financial disclosure rules — that even if Mr. Reid had listed the newly formed corporation, Patrick Lane LLC, that wouldn't have by itself demonstrated Mr. Brown's involvement. Nonetheless, that Mr. Reid no longer owned the land, but instead had sold it for an interest in the Patrick Lane corporation, was not some mere "technical change," as the senator would like to brush it off. It's an essential element of financial disclosure rules, the purpose of which is to know how and with whom public officials are financially entwined.

Meanwhile, Friday’s Las Vegas Review-Journal has a story detailing Reid’s comments yesterday that he will work with the Senate Ethics Committee, and his pointing the finger at Claude Zobell as the lawyer who prepared his Senate disclosure forms. An excerpt of Steve Tetreault’s story, which carried a Washington, D.C. dateline:

Reid, who served on the Senate Select Committee on Ethics at the time, continued to maintain that the transfer was "technical" and did not change his ownership of the land.

He said he did nothing improper, "but if the ethics committee wants me to file a technical correction, then I will be happy to do it."

Besides the additional paper, "nothing will change," he said.

Reid said he did not consult with the ethics committee at the time but perhaps should have. He said his financial disclosures have been prepared for 24 years by Claude Zobell, an attorney who was his first congressional chief of staff, in 1983.

"I don't want to try to be flippant about this. I don't mean to be," he said. "I will do whatever is necessary, but it doesn't change anything. It doesn't change the taxes that were paid. I've done everything legally."

Zobell could not be reached Thursday at his office in Memphis, Tenn., or at his home, where his wife said he was traveling. He is the brother of Charles Zobell, managing editor of the Las Vegas Review-Journal.