Rosie Declines Getting Political 'On The First Day’ of ‘The View’ 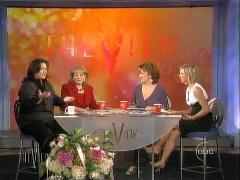 "The View," with new co-host Rosie O’Donnell, debuted its tenth season today. O’Donnell, known for her extreme left-wing politics, steered clear of any overt displays of liberalism. There were, however, hints of conflicts to come. After co-host Joy Behar playfully mocked Rosie’s use of baby talk, Ms. O’Donnell looked right into the camera and observed, in reference to conservative co-host Elisabeth Hasselback, "...You all thought I was going to have problems with Elizabeth!" Barbara Walters wryly responded, "And trust me, you will!"

Rosie’s "View" debut, which aired on September 5, saw many of O’Donnell’s old standbys: Odd stories about her children and free giveaways to the audience. The comedian appeared to be making an attempt to remind viewers of the "Queen of Nice" Rosie, and not of a loud, political liberal. At 11:09, Behar, possibly in an attempt to set off a rant, asked O’Donnell how many times she had been married:

Behar: " But didn’t they nullify it?"

Rather then take the bait, the new co-host decided to stay polite:

O’Donnell: "We were married and then un-married. But, you know, it’s, you know, we'll get to that, not on the first day."

The women discussed the touchy subject of Rosie blogging on her web site. Barbara Walters denied press accounts that she had been angered by the posts. And in doing so, the veteran ABC journalist showed how out of touch she is with the new media:

Walters: "I have never read a blog."

Walters: "I don’t know how to find a blog. What do you do? You look under Word Perfect and and it says blog?"

Finally, with ten minutes left in the show, O’Donnell appeared in a taped segment in which she answered questions about what’s been happening for the last four years of her life. After discussing a bad haircut and a failed magazine, O’Donnell expounded on her announcement that she was gay:

O’Donnell: "I didn't think it would be so shocking to people, number one. And number two, I sort of thought everybody knew, you know? Which was shocking to find out they didn’t, you know."

It’s hard to imagine why Americans might have been surprised to learn O'Donnell was gay. Perhaps it had something to do with her constantly announcing how much she loved Tom Cruise?

A few seconds later, O’Donnell opined about having her marriage invalidated and indicated that "there will come a day" when she has another opportunity.

O’Donnell: "I said to Kelly, would you marry me? She said, ‘Certainly.’ We got on a plane and got married two days later in San Francisco. Kelly was very hurt when, sort of, we got the paper that said, you know, your marriage has been invalidated. And, you know, I said honey, no paper made us married and no paper is going to make us unmarried. And, you know, there will come a day. ‘You don’t deserve the marriage word,’ is a cultural fight. But, you know, do you deserve equality under the constitution? Of course you do."

Ms. O’Donnell may have avoided directly attacking conservatives during her debut appearance. But once the politeness wears off, Americans can probably expect more onscreen campaigning for gay marriage and a host of other liberal causes.