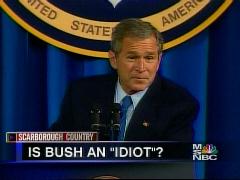 Well, MSNBC and Joe Scarborough have clearly figured out how to get their show mentioned in a liberal newspaper. Inside Sunday's Washington Post, reporter Peter Baker wrote an article about conservative disillusionment with Bush on Iraq headlined "Pundits Renounce the President: Among Conservative Voices, Discord." Baker began:

For 10 minutes, the talk show host grilled his guests about whether "George Bush's mental weakness is damaging America's credibility at home and abroad." For 10 minutes, the caption across the bottom of the television screen read, "IS BUSH AN 'IDIOT'?"

But the host was no liberal media elitist. It was Joe Scarborough, a former Republican congressman turned MSNBC political pundit. And his answer to the captioned question was hardly "no." While other presidents have been called stupid, Scarborough said: "I think George Bush is in a league by himself. I don't think he has the intellectual depth as these other people."

The show aired on Tuesday (transcript here). Scarborough also paraded this idiot-Bush line in a blog on The Huffington Post. What Baker does not consider is what one might call the Scarborough Syndrome: being a conservative host inside a liberal network -- not to mention a liberal network that has a history of changing prime-time hosts like socks -- might compel you to be more critical of Bush and conservatives. In the study of MSNBC segments -- well, just this one -- Baker also ignores that Scarborough, now anointing himself the avatar of intellectual curiosity, has often buried his viewers in tabloid piffle like the unending JonBenet Ramsey case, which isn't exactly honoring the intellect of your viewers. The Baker article also ends with Scarborough:

While the country does not want a leader wallowing in the weeds, Scarborough concluded on the segment, "we do need a president who, I think, is intellectually curious."

"And that is a big question," Scarborough said, "whether George W. Bush has the intellectual curiousness -- if that's a word -- to continue leading this country over the next couple of years."

In a later telephone interview, Scarborough said he aired the segment because he kept hearing even fellow Republicans questioning Bush's capacity and leadership, particularly in Iraq. Like others, he said, he supported the war but now thinks it is time to find a way to get out. "A lot of conservatives are saying, 'Enough's enough,' " he said. Asked about the reaction to his program, he said, "The White House is not happy about it."

The article also includes William F. Buckley's critique of Bush's Iraq policy, along with an interview with current National Review editor Rich Lowry. But the strangest part of the article -- the one that suggests "one of these things is not like the others," is this paragraph:

Thomas L. Friedman, a New York Times columnist who is not a conservative but has strongly backed the Iraq war, reversed course this month, writing that " 'staying the course' is pointless, and it's time to start thinking about Plan B -- how we might disengage with the least damage possible."

UPDATE: Howard Mortman concurs: "Is Scarborough deserving of Mensa membership? Not if you consider the types of shows Scarborough puts on."