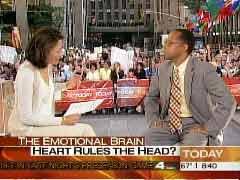 It's been 18 years but the media still can't get over Michael Dukakis' defeat to George Bush and the Willie Horton ad they blame for that Bush victory. On this morning's Today NBC's Ann Curry brought on psychologist Jeff Gardere to discuss a new study that showed how emotions can overtake logic in decision-making. Curry introduced the segment: "Have you ever been accused of thinking with your heart and not your head well if so a new study reports your just like everybody else....This is just the latest biological evidence to suggest that next time you make a bad choice maybe you really can blame it on your emotions." Just seconds later NBC's producers ran the Horton ad as Exhibit A of emotions leading to the "bad choice," of voting for Bush.

Over the Horton ad Gardere explained the psychological term of ‘framing': "Well an example of framing would be, for example, a political campaign that says, well someone is very soft on crime, and what they would do is perhaps pull out some sort of a picture or some sort of information about that candidate, in fact, saying something, maybe just one thing. And then because of that particular one thing that they've said then painting with a broad brush saying that, that person is totally soft on crime." Curry then underlined Gardere's point: "Playing into the fear of people."

However Today didn't leave it there. In addition to citing votes for Bush as an example of emotion overcoming intellect, Gardere and NBC's producers indicted SUV-buyers:

Gardere continued: "Playing into the fears of others. And with that neuro-imaging they saw as you saw with this clip the amygdala firing which is the center of many emotions including fear and anxiety."

Gardere, over stock footage of HUMVs: "To, to car commercials where they can sell you a gas guzzler and say, 'hey this is a great deal, this is something you should do even though we know it's gonna cost us dearly by looking at the emotion."

Finally Curry asked Gardere for solutions to emotional thinking: "Okay let's talk about how to control it. You say we've got to keep our brain healthy with, with, what crossword puzzles? What are you talking about?"

Somewhere Susan Estrich is thinking: "If only we handed out the New York Times crossword page instead of all those lame ‘Greeks Do It Better' buttons I could've been White House press secretary."