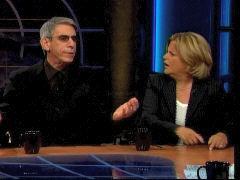 [Be advised that this item includes accurate quotations of vulgarities.] When Congresswoman Ileanna Ros-Lehtinen contended Friday night, on HBO's Real Time with Bill Maher, that servicemen she's met in Iraq are “saying 'we're proud of our mission, we know what we're doing over here. We don't want you guys in Washington to lose it over there,'” actor/comedian Richard Belzer condescendingly fired back, claiming that to “ask them” is “bullshit” since, apparently unlike him, “they don't read twenty newspapers a day.” Ros-Lehtinen cited the knowledge of her Marine officer stepson, but Belzer, who plays “Detective John Munch” on NBC's Law & Order: SVU, retorted: “Doesn't mean he's a brilliant scholar about the war because he's there.” A quite agitated Ros-Lehtinen sputtered: "Oh, you are though! You are though? Okay." To which Belzer affirmed: "Well I have more time...” Host Bill Maher interjected that Belzer's point was that a 19-year-old is in the army “because he probably couldn't find other employment." The Republican Congresswoman from Florida countered that her stepson is a college graduate, leading Belzer to snidely denigrate the military: "You think everyone over there is a college graduate? They're 19 and 20-year-old kids who couldn't get a job.”

Ros-Lehtinen mocked him: "Yeah, you know because you've been there." Belzer rudely lashed back: "What, I don't fucking read!? Don't do that!" He went on to argue: "It's this patronizing thing that people have about if you're against the war everyone's lumped together. You know, the soldiers are not scholars, they're not war experts." That was too much for host Bill Maher: "You're going to lose even me...”

During the 2004 campaign, liberals contended that Democratic presidential nominee John Kerry's experience in Vietnam as a ground soldier made him an expert on the Iraq war, but now, by Belzer's reasoning, soldiers and Marines actually on the ground in Iraq have no credibility.

Belzer is a conspiracy theorist who authored the 1999 book, “UFOs, JFK and Elvis: Conspiracies You Don’t Have to Be Crazy to Believe.” His NBC bio notes that “he hosted and produced The Belzer Connection, a series of conspiracy-theory prime time specials for the Sci-Fi Channel.”

On the March 17 Real Time with Bill Maher, produced at CBS Television City in Los Angeles and aired live on HBO at 11pm EST, Belzer and Ros-Lehtinen were joined on the panel by liberal writer Michele Mitchell. Belzer had a boisterous audience on his side during this exchange with Ros-Lehtinen which I attempted to transcribe, impeded by the frequent talking over each other:

Congresswoman Ileana Ros-Lehtinen: “Having been in Iraq a few times, and Afghanistan, having met the troops one-on-one with free reign and asking them what they're doing, they're saying 'we're proud of our mission, we know what we're doing over here. We don't want you guys in Washington to lose it over there'. And there is a great sense of determination that what they are doing is making a difference. And yes, it has been an important mission what we're doing, come on.”

Richard Belzer: “Yeah, come on. Our soldiers now are at-”

Belzer: “Okay, fine. No one questions the nobility and the honor that these men and woman who are serving and what they're doing. No one questions that. But now they're targets, they're not going out. Now they're just protecting each other and they're in the middle of a civil war. So it's really not fair to have these people who volunteered their lives to protect our nation under false pretenses to now be, to have targets-”

Belzer: “That's bullshit: ask them! They're not, they don't read twenty newspapers a day. They're under the threat of death every minute. They're not the best people to ask about the war because they're gonna die any second.”

Ros-Lehtinen: “Wait a minute! You are talking about my stepson, my stepson who just finished last week eight months of duty-”

Belzer over Ros-Lehtenin: “God bless your stepson. Doesn't mean he's a brilliant scholar about the war because he's there. (applause) And God bless him.”

Belzer: “Well I have more time, I'm not there. My life is not under threat.”

Maher: “I think the point he's trying to make is that a 19-year-old who is in that army because he probably couldn't find other employment-”

Ros-Lehtinen: “He's a college graduate. He's a Marine officer. He volunteered for the Marines.”

Belzer: “He's the exception for the rule.”

Ros-Lehtinen: “He's not the exception for the rule. I've been there-”

Belzer: “You think everyone over there is a college graduate? They're 19 and 20-year-old kids who couldn't get a job-”

Ros-Lehtinen: “Yeah, you know because you've been there and-”

Maher: “That was over the line and now you're going to lose-”

Belzer: “It's this patronizing thing that people have about if you're against the war everyone's lumped together. You know, the soldiers are not scholars, they're not war experts-”

Maher: “You're going to lose even me like Michael Moore did when he came down on Charlton Heston in Columbine.”