Can you imagine the visage of Adolf Hitler being incorporated as a kitsch pop item and celebrated as a "kind of George Washington, James Dean" icon in the mainstream press? 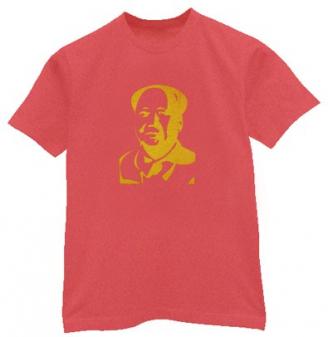 Probably you can’t. But left-wing mass-murderers get an irony pass in both the media and pop culture. Chairman Mao's image is almost as ubiquitous as that of Che Guevara (another left-wing killer, albeit on a less grand scale). A Sunday Week in Review story by David Barboza ("Chameleon Mao, the Face of Tiananmen Square") celebrates Mao's image without acknowledging the millions of murders under his long reign.

"Few images created in the last century are as recognizable as the official portrait of Mao that looms over Tiananmen Square in Beijing.

"For decades, the 15-by-20-foot oil painting has served as a national icon. This is the same image that, in the 1960's and 70's, was widely reproduced and hung near the entrances to millions of homes, schools, factories and government buildings. During the Cultural Revolution, when Mao was raised to cult status, it seemed as if the entire nation had set about drawing a Mao portrait, or at least honoring one. If Mao's Little Red Book was the national bible, Mao's official portrait was the national stamp.

Barboza only obliquely hints that people in China may have a different view: "And while people in China seem to have lost some affection for Mao, and even protested in 1989 by splattering his Tiananmen portrait with paint, his image still represents something indelible and intangible, experts say."

"Lost some affection" is a strange way to put it -- conservative estimates suggest Mao's reign was responsible for the deaths of some 20 million.

"Mao's image may also be considered China's first and only global brand. Even though China is a rising economic power, it still does not have a BMW or a Coca-Cola to sell to the rest of the world. But it does have Mao -- a kind of George Washington, James Dean and Che Guevara wrapped in one; a historic and pop figure who continues to be hip and fashionable, even when Communism and the Communist Party are not."