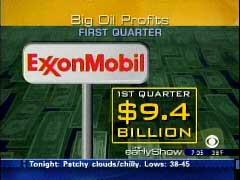 All three network morning shows played the envy card Thursday morning, as they hyped the “record high profits” and “corporate greed” of American oil companies. High on their agenda: ExxonMobil’s announcement of $8.4 billion in profits, which the networks implied was scandalous given the high price of oil.

Big Government is making more off of high gas prices than Big Oil.

If it was a contest, the anchors and reporters of CBS’s The Early Show seemed the most outraged by the “greed” of oil companies this morning. Co-host Rene Syler teased at the top of the show: “As Americans struggle to keep up with high gas prices, oil companies are reporting record earnings. Is this a case of corporate greed out of control?”

She ended by suggesting dividing the wealth: “Exxon Mobil could make a record $41 billion in profit by the end of this year. That’s enough money to give every American man, woman and child a check for $137.”

As for “record profits,” ExxonMobil’s actual profits, announced later in the morning, amounted to $8.4 billion, $1 billion less than CBS predicted and a 22 percent decline from the $10.7 billion achieved in the fourth quarter of 2005.

Similarly, during ABC’s 7am news update, Good Morning America’s Robin Roberts played to the public’s emotion: “Now to those ever rising gas prices sure to fuel drivers’ anger. The world’s largest oil company, ExxonMobil, is expected to announce record breaking profits this morning in the neighborhood of $9 billion. The nation’s top five companies combined profits are an estimated $27 billion.”

During the 9am news update on Today, after the actual figures were announced, NBC’s Ann Curry noted “ExxonMobil reported record first quarter earnings and profits that were up 7% over last year. On Wednesday, as part of an investigation into industry profits and soaring pump prices, the Senate Finance Committee asked to see tax returns from major oil and gas companies.” While Curry spoke, viewers saw (but did not hear) New York Democrat Charles Schumer in front of a gas station price sign, presumably railing against the oil companies.

As for ExxonMobil, in 2005 the company reported paying just under $99 billion in taxes — $23.3 billion in income taxes, $30.7 billion in excise taxes, and $44.6 billion in “other taxes.” And yet politicians are preparing to extract still more in taxes from the big oil companies, as if those costs won’t ultimately be incurred by consumers.
Oil & Gas Prices ABC CBS NBC Today Good Morning America Early Show