"Anything New?" Katie Makes It Official 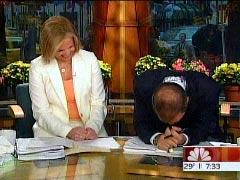 Playing the straight man to perfection, Matt Lauer kicked off the second half-hour of this morning's Today show by asking Katie Couric: "Anything new?"

In responding, Couric made official what she acknowledged was "the worst kept secret in America": that after 15 years she was leaving Today to go to the CBS Evening News and 60 Minutes. Here, for posterity, was the opening line of Couric's announcement:

"I wanted to tell all of you out there who have watched the show for the past 15 years that after listening to my heart and my gut, two things that have served me pretty well in the past, I've decided I'll be leaving Today at the end of May."

Displaying some good deadpan-humor instincts, Matt Lauer didn't react to Katie's statement and made as if to move on, intoning "also coming up in this half-hour" before collapsing in laughter as per the screen shot shown here.

Perhaps the most surprising aspect of Katie's announcement was the admission, speaking of Matt, that "once in a while we get on each other's nerves. Well, he gets on my nerves." She went on to make clear that "I could not have asked for a more talented partner or better friend, and just as Dorothy said to the Scarecrow, I think I would miss him most of all." 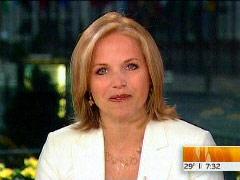 While Katie was clearly reading a prepared statement, emotion regularly crept in, as can be seen in the shot here of Katie getting a bit misty.

As Couric mentioned, she won't be leaving the show until the end of May, so this morning was hardly her swan song. There was one closing bit of humor. At one point the entire regular cast assembled on the couches, and as the segment ended Matt gave Katie's knee a squeeze as he declared "well done." Katie jokingly exclaimed "get your hand off my knee!" and after a pause Al Roker added "can't wait to see Bob Schieffer do that!"