Has the Public “Embraced” a Film That Grossed $6 Million? 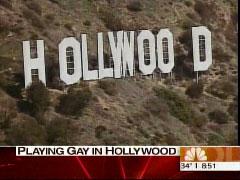 On March 5, the morning of the Oscars, the Today show indicated that mainstream Hollywood might be too conservative. Yes, you read that correctly. NBC correspondent Jennifer London, in a segment airing at 8:51AM EST, discussed the gay themes of Capote, Brokeback Mountain and Transamerica. She then made the following comment:

London: "The message this year? It's good to be gay in Hollywood. Or is it?"

The piece pointed out that despite the nominations of heterosexual actors Jake Gyllenhaal and Heath Ledger for their roles as homosexuals, many gay actors don’t come out. Ms. London also asserted that the public endorses these films, it’s the studios who are squeamish:

London: "And what about the big studios? While the public embraced movies like Capote, Transamerica and Brokeback Mountain, these films were not bankrolled by the major studios. But once it became clear that these films had mainstream appeal, the studios didn't hesitate to put their money muscle behind the movies."

The above statements are true only if you have a very generous definition of "embrace" and "mainstream." Transamerica, the film starring Felicity Huffman as a transsexual, has grossed just over $6 million in three months. Capote, a biography of writer Truman Capote, has made an equally unimpressive $25 million after five and a half months. Brokeback Mountain is the only film that one could possibly argue has been "embraced." After 87 days, the movie, revolving around two gay cowboys, has earned $78 million. Not bad. But consider this: Cheaper by the Dozen 2, a thoroughly mediocre Steve Martin vehicle, grossed $81 million in the 75 days. I guess I missed all the praise and adulation for that film’s success. (All of these statistics are accurate as of March 5.)