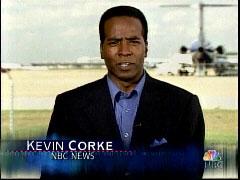 Too slow on Katrina, too quick on Rita? During Saturday’s special hour-long NBC Nightly News, reporter Kevin Corke suggested President Bush ran “the risk of looking like a political opportunist” with Hurricane Rita by taking exactly the active hands-on approach demanded by media critics in the days after Hurricane Katrina hit the gulf coast last month.

The liberal media are never satisfied.

MRC news analyst Mike Rule caught Corke’s reasoning: “As Rita’s howling winds lashed the gulf coast, it was another storm, Hurricane Katrina, that may have had the most to do with the way the Bush team responded to Rita — criticism the President didn’t respond quickly enough, leisurely wrapping up a five week vacation in Crawford, and continuing with planned events despite the unfolding tragedy.”

Corke continued: “But this time’s been very different — the President has remained active including appearances today in Colorado and here in Texas. But political analysts warn that by trying to do so much in so many different places, the President actually runs the risk of looking like a political opportunist.”

Viewers then heard a pretty bland soundbite from political analyst Charlie Cook, who seemed less of a critic than someone who was merely stating the obvious: “It’s a, it’s a narrow line that President’s have to, to walk, and that um, you know, and they open themselves up to criticism no matter what they do.”

Then back to Corke: “Cook adds that too many Presidential trips could be disruptive for first responders, a point that the President made in an exchange with NBC’s David Gregory Friday at FEMA headquarters.”

NBC then showed Gregory asking Bush: “I mean what can you actually do? I mean, isn’t there a risk of you and your entourage getting in the way?”

Bush replied, “No, there will be no risk of me getting in the way, I promise you.”

Corke wrapped it up by again insisting that Bush’s conduct is suspect: “And as he returns to Texas tonight, Mr. Bush walks a precarious political tightrope, especially challenging for a President hoping to find the right footing in the midst of a political storm. Kevin Corke NBC News, Austin Texas.”
Hurricane Katrina NBC Nightly News