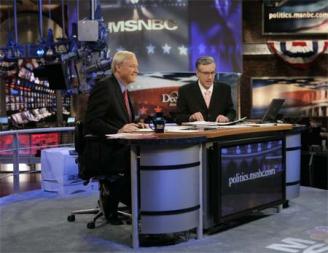 Before you answer, consider what a John Edwards campaign representative said in April when it was announced that the Democrat presidential candidate from North Carolina wouldn’t attend the September 23 debate sponsored by Fox News as reported by the Associated Press (emphasis added):

“We believe there's just no reason for Democrats to give Fox a platform to advance the right-wing agenda while pretending they're objective," said Jonathan Prince, Edwards' deputy campaign manager.

Given what transpired Thursday evening, is there a reason why Republicans should give Democrat shills like Chris Matthews and Keith Olbermann a platform to advance their leftwing agenda while pretending they’re objective?

After all, it is the Democrats here that have drawn a line in the sand, and established this precedent. If it is now indeed acceptable for candidates to decide what media outlets are allowed to sponsor debates, shouldn’t candidates also be able to do decide what media representatives can participate?

This seems particularly reasonable given what the MRC’s Rich Noyes told FNC’s Neil Cavuto on Friday’s “Your World”:

Fox News had debates in the last cycle. A lot of the questioners brought in — they were not Fox employees — they were some liberal reporters like Gwen Ifill and Juan Williams, along with some of Fox's own people like Carl Cameron.

Exactly. As such, it’s not like the scheduled questioners for the debates the Democrats boycotted were Bill O’Reilly, Sean Hannity, Ann Coulter, and Glenn Beck. Yet, they still backed out.

With that in mind, it seems logical in the next eighteen months before Election Day for the Republicans to not subject themselves to questions like “Is Karl Rove your friend,” “Would it be good for America to have Bill Clinton back living in the White House,” and “What do you dislike most about America?”

To accomplish this, they will have to make it clear to the sponsoring media outlet which press members are unacceptable.

Isn’t it sad that it’s come to this?