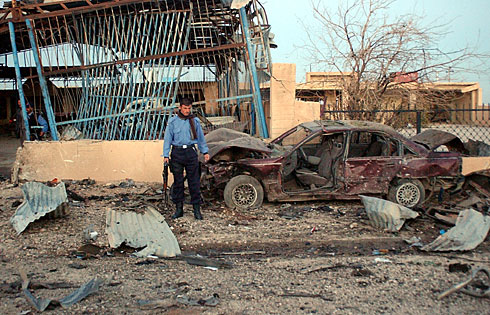 The news that six Sunnis were captured by Shiites, doused with kerosine and burned alive, was too sensational to not be picked up by the mainstream media. But it turns out that the event never happened. Furthermore, the Iraqi "spokesman" relied on to give all information regarding this event is as fictional as the story itself.

Flopping Aces has a press release from Centcom, which is in charge of all U.S. forces in the Middle East.

On Nov. 24, 2006, your organization published an article by Qais Al-Bashir about six Sunnis being burned alive in the presence of Iraqi Police officers. This news item, which is below, received an enormous amount of coverage internationally.

We at Multi-National Corps - Iraq made it known through MNC-I Press Release Number 20061125-09 and our conversations with your reporters that neither we nor Baghdad Police had any reports of such an incident after investigating it and could find no one to corroborate the story. A couple of hours ago, we learned something else very important. We can tell you definitively that the primary source of this story, police Capt. Jamil Hussein, is not a Baghdad police officer or an MOI employee. We verified this fact with the MOI through the Coalition Police Assistance Training Team.

Also, we definitely know, as we told you several weeks ago through the MNC-I Media Relations cell, that another AP-popular IP spokesman, Lt. Maithem Abdul Razzaq, supposedly of the city’s Yarmouk police station, does not work at that police station and is also not authorized to speak on behalf of the IP. The MOI has supposedly issued a warrant for his questioning.

I know we have informed you that there exists an MOI edict that no one below the level of chief is authorized to be an Iraqi Police spokesperson. An unauthorized IP spokesperson will get fired for talking to the media. While I understand the importance of a news agency to use anonymous and unauthorized sources, it is still incumbent upon them to make sure their facts are straight. Was this information verified by anyone else? If the source providing the information is lying about his name, then he ought not to be represented as an official IP spokesperson and should be listed as an anonymous source.

Unless you have a credible source to corroborate the story of the people being burned alive, we respectfully request that AP issue a retraction, or a correction at a minimum, acknowledging that the source named in the story is not who he claimed he was. MNC-I and MNF-I are always available and willing to verify events and provide as much information as possible when asked.