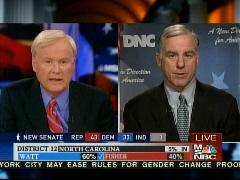 Howard Dean not anti-war enough for Chris Matthews? During MSNBC's election night coverage, Matthews challenged Dean from the left on how soon to pull troops out of Iraq, asking the DNC chairman how he could "justify the loss of another American life or another Iraqi life in a mission that doesn't seem to make any sense at this point? Why stay in Iraq just to make it look good so you'll look like a centrist party?" Although Matthews' questions on Iraq also challenged Dean on the Democratic Party's lack of a clear plan of their own on how to handle Iraq, Matthews did not voice any concerns about whether Democrats might pressure a withdrawal too soon. (Transcript follows)

Matthews began to push Dean from the left after the DNC chairman answered a question from Matthews about what voters could expect to get out of voting for Democrats regarding Iraq. Below is a transcript of the relevant portion of Matthews' interview with Dean which aired about 8:40 p.m. EST on MSNBC:

Matthews: "You're used to talking to moderates about this and trying to sell the Democratic Party as the party of the center, but let me ask you a question coming from the left. How can you, Governor, a man who's opposed this war from the beginning, justify the loss of another American life or another Iraqi life in a mission that doesn't seem to make any sense at this point? Why stay in Iraq just to make it look good so you'll look like a centrist party?"

Howard Dean: "I don't, that's, you know, I don't think anybody's talking about that, Chris. I think you got to be responsible-"

Matthews: "What's a good reason for staying in Iraq? Let me hear one."

Dean: "Because if you pull your troops out immediately, you do get chaos. Look, the President's made a terrible mistake-"

Matthews interrupts: "What do we have now?"

Dean: "There is an opportunity to do some stabilization in Iraq, and we should take that opportunity. Look, I was one of the few people early on who said this was a mistake. I still believe it was a mistake, and I don't think the President was truthful to the American people when he got us in there, and I don't think he served our brave troops well by sending them over there without listening to the military first. Having said that and establishing that I think I probably have as much credibility on this issue as anybody in the country, I personally believe that you have to be responsible and thoughtful as you get out. The issue is not 'Do we want one more American troop that's not necessary to die?' Of course we don't want that."

Matthews: "Would you be saying that if you weren't chairman of the party? If you were just former Governor Dean-"

Dean: "Of course I'd be saying what I believed. Not only would I be saying that-"

Dean: "No, Chris, let's not be putting words in my mouth. I believe we ought to get out of Iraq, but we have to do it very carefully and thoughtfully."

Matthews: "Okay, a year from now, two years from now, give me an outside. How long would you keep us in the outside?"

Dean: "I'm certainly not going to play it with you on election night. We don't even have a majority yet."

Matthews: "It's a policy question. I think the American people want to hear from the Democrats some sense of your party's position on this war besides 'We're not going to bug out, we're not going to cut and run.' What will you do?"

Dean: "Chris, I think they'll be hearing from us as soon as we get the majority, but we don't have that majority yet, and I don't believe I'm going to do a lot of policy questions tonight."

Matthews: "Well, please come on this show as soon as you can tell us the Democratic Party position on Iraq because 100 million people voted today to try to have some influence on policy, and we still don't hear from you a policy."