As Brent Baker of MRC/NB has documented, MSNBC has been among the worst MSM offenders in propagating the falsehood that Rush Limbaugh had accused all anti-war military members of being "phony soldiers."

A point of light at that same network this morning, however, as Joe Scarborough and Willie Geist combined to debunk the Media Matters allegation, accusing the organization of using a "phony story about a phony soldier" to go after Rush.

It began at 6:04 A.M. EDT today, during the "Morning Joe" opening coffee klatsch.

I had great expectations when Ana Marie Cox turned up on the "Morning Joe" panel, confident the tart-tongued former Wonkette would produce plenty of grist for our NB mill. But over the course of the week, Cox has been disappointingly subdued, leaving it to the congenial Tamron Hall to produce our headlines. Perhaps Ana Marie's new gig at staid "Time" magazine has caused her to hide her acerbic light under a barrel.

But the strain of being restrained was maybe too much for Ana Marie, for she began this morning's show with a catty swipe at Katie Couric.

JOE SCARBOROUGH: So Katie's going off to the war zone. Did you read that? Katie Couric.

Last week, as noted here, Tamron Hall mentioned that "Us Weekly" aside, her main news source is the New York Times. Two days earlier, Hall had defended CNN's "God's Warriors" by suggesting that Christian and Jewish groups could be the next to turn violent. Today comes further evidence of Hall's liberal leanings, as the MSNBCer spoke openly of her participation in events on behalf of the National Organization for Women.

The disclosure came on today's "Morning Joe" at 6:09 A.M. EDT. Host Joe Scarborough, discussing the Michael Vick case, suggested that whereas there has been tremendous media focus on the dogfighting charges, allegations that pro athletes abuse women don't get as much attention.

Bad News: Tamron's Info Sources are Us Weekly and NYT 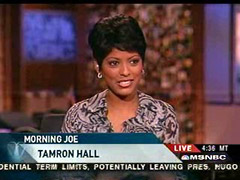 MSNBC's Tamron Hall [file photo] is a big "Us Weekly" fan. Even more disturbing: she believes that guilty pleasure is expiated by her reliance on the New York Times for her news.

Mika Brzezinski might be taking a break from "Morning Joe," but the MSNBC show hasn't missed a liberal beat with her replacement. Tamron Hall today seemed to suggest that Christians and Jews could be next to emulate Muslim terror tactics.

At 6:35 A.M. EDT today, talk turned to the CNN series "God's Warriors," a classic exercise in moral equivalence. Hosted by Christiane Amanpour, the series focuses on extremists in Christianity, Judaism and Islam.

JOE SCARBOROUGH [Note: speaking very much tongue-in-cheek]: I'm sure we're going to find that there are Jewish and Christian organizations, international terror networks, that are set on the destruction of entire civilizations as we find in the Muslim world.

That's when Hall began to rise to CNN's defense.