That's right, the food police have a warrant out for Ronald McDonald.

But rather than include a voice of dissent to challenge Roth on the government-expanding, free enterprise-attacking nature of the law, Novotny tried to tinker around the edges, wondering if it might be better to encourage restaurants to put free toys in healthier kids meal options. [full interview embedded at right, click here for MP3 audio]

Roth dismissed that notion as a "bribe" to get kids to adopt healthier eating habits, although she also absurdly argued that:

MSNBC Talking Points: Touting Obama as a Pro-gun President, Lecturing Activists for 'Worrying' Too Much 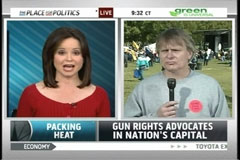 MSNBC on Monday repeatedly promoted Barack Obama as a pro-Second Amendment President and chastised gun-rights activists for "worrying" so much over this issue. News Live host Monica Novotny talked to Skip Coryell, the founder of the Second Amendment march on Washington and complained, "What are you guys worried about?

She then touted, "Our political unit today was reminding us in the First Read that President Obama has expanded gun rights more than any other Democratic President when he signed legislation that, among other things, allows people to carry weapons in national parks." Host Tamron Hall repeated the talking point in the 11am hour.

MSNBC colleague Norah O'Donnell condescendingly hit the same idea in a Tweet: "irony [sic] of the men-with-guns protests in DC: Obama has expanded gun rights more than other recent Dem president." Of course, Obama also appointed the extremely anti-gun Sonia Sotomayor to the Supreme court. Another nominee hostile to the Second Amendment may be coming soon. Candidate Obama famously chastised "bitter" Americans for "clinging" to their guns. 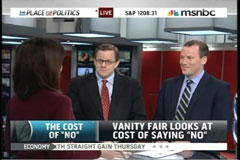 MSNBC's Monica Novotny on Friday highlighted a dubious Vanity Fair piece lamenting the "cost" of the Republican Party opposing Barack Obama's agenda. The News Live host talked to writers Duff McDonald and Peter Keating about their contention that the "party of no" has cost taxpayers $1.34 billion.

Apparently, the GOP and various conservative organizations total this much by not supporting health care or the stimulus. Never mentioned in the article or during the segment is the fact that Obama's spending on those two items alone will end up costing taxpayers $3.3 trillion, 2500 times the amount of the expensive Republicans.

During the segment, Keating snidely remarked, "And, you know, Republican offices need heat and light and water and sewage. People are showing up just to say no and we're paying for it!" Earlier in the piece, Novotny played along and complained, "So, for that [the price of the GOP], we've got nothing?" 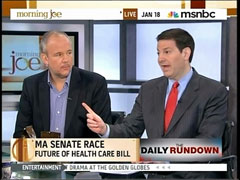 In a bizarre twist of logic, on Monday’s Morning Joe program on MSNBC, Time magazine’s Mark Halperin argued that if Democrat Martha Coakley lost the race for the Massachusetts Senate, it would improve chances of health care reform passing: “I actually think they may get health care more easily than if they win.”

While Halperin acknowledged that losing the Senate seat that once belonged to the late Ted Kennedy would be a “disaster” for Democrats, he explained the supposed upside: “...if she wins, if they hold the seat, they’re still going to have to come up with a deal and then they’re going to have to have two votes, the House and Senate. They’re going to have to go through, you know, the torture of Joe Lieberman and Ben Nelson deciding if they can deal with the compromised bill.” Halperin seemed convinced a Coakley loss could avoid all of that torturous democracy.

Later in the 12:00PM ET hour of live coverage on Monday, anchor Monica Novotny referred back to Halperin’s Morning Joe comments and asked guests Richard Wolffe and Larry Sabato about such an analysis of the situation: “In a discussion about this race earlier this morning on our air, the point was made that perhaps it’s better for the Democrats if they lose this seat....What do you think?”

See the video embedded at right, where you should also take note of how MSNBC's Monica Novotny attempted a first-draft of face-saving talking points for the Obama White House.

'Pres. Obama Doesn't Have A Very Robust Sense Of Humor'

You might call it a decided understatement. Still, it was refreshing to hear a member of the White House press corps state an inconvenient truth about Pres. Obama: that he is under-supplied in the sense of humor department.

Julie Mason, White House correspondent of the Washington Examiner, offered the observation this afternoon on MSNBC. She was on to discuss the awkward situation created by the separate meetings with Pres. Obama that Hillary and Bill Clinton are having this afternoon.

When Monica Novotny asked whether PBO might take the occasion to rib her about her sharp response to the student in the Congo who asked about Bill's views, Mason offered her candid comment.

At the top of the 4:00PM ET hour on MSNBC Friday, fill-in co-anchor Monica Novotny issued a dire warning about protests at health care town hall meetings: "The town hall confrontations are turning violent....Where is all of this heading? New fears for the safety of America’s first African-American president." [Audio/video (0:33): Mp3 | WMV]

In a later segment, co-anchor David Shuster interviewed Virginia Democratic Congressman Jim Moran and asked: "We know that threats to President Obama are up by like something 400% compared to the Bush administration. Is this putting our president in some sort of danger because of some wacko that will see this stuff and say, ‘oh, yes, it’s fascism and the way we dealt with Adolf Hitler was to try to kill him, so therefore, let’s do this with our president.’"

Congressman Moran responded to that outrageous scenario by remarking: "Well, you know, it only took – takes one person. It took one person to shoot Ronald Reagan, Jack Kennedy, and so on. But I think the Secret Service can be trusted to protect the President. But it does discredit those people who are using such extreme measures to achieve an objective which is really corporate profit."

By Kyle Drennen | June 1, 2009 5:43 PM EDT
During live MSNBC coverage in the 9AM EST hour on Monday about the murder of abortion doctor George Tiller, guest Dr. Warren Hern, a fellow abortionist and friend of Tiller, declared: "Dr. Tiller's crime was that he helped women and the man who killed him tried to kill an idea. The idea is freedom. So we don't have to invade other countries to find the terrorists. They’re here killing doctors who do abortions. The difference between – the main difference between the American anti-abortion movement and the Taliban is about 8,000 miles." Instead of challenging such an incendiary statement, correspondent Monica Novotny simply concluded the segment: "Dr. Warren Hern, thank you for joining us today. We appreciate it." [audio available here]

Earlier in the interview, Novotny asked Hern: "You were quoted as saying that Dr. Tiller's death was ‘predictable.’ What was your reaction when you heard and why do you say that?" Hern explained his statement: "This was not the act of a lone deranged gunman. This is a result of 35 years of relentless and merciless anti-abortion harassment, violence, and intimidation, hate speech and violent rhetoric, and this is the absolutely predictable consequence of that kind of mindless harassment and fanaticism."