Shear opens with a story about how Obama prayed with "three Christian pastors" over the phone as he flew to Chicago to celebrate his 49th birthday. "As he celebrated his birthday, he was in a reflective mood," Shear cooed. "He told them he wanted to pray about the year that had passed, what's really important in life and the challenges ahead," the Post staffer added before cuing up Joel Hunter, "an evangelical pastor who ws on the call and who is part of a small circle of spiritual advisers who frequently talk to Obama by phone."

Hunter served up the argument of Shear's article, that because Obama is private about his Christian faith, it's no wonder polls show a growing number of people unsure of his faith, with some even thinking he's a Muslim. "You know what happens with a vacuum?" Hunter asked, before answering his own question, "It gets filled." 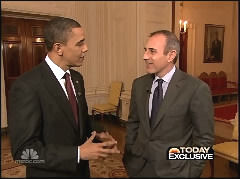 Thursday's Washington Post reports that a new poll by the Pew Research Center found “The number of Americans who believe – wrongly – that President Obama is a Muslim has increased significantly since his inauguration and now account for nearly 20 percent of the nation's population.” Team Obama quickly blamed “'misinformation campaigns' by the president's opponents.” The Post's Jon Cohen and Michael D. Shear just pass that along without any specifics.

But what's really shaky is the story's accuser, Obama “faith adviser” Joshua DuBois, trying to tout how the president is deeply, “diligently” Christian, when the president is much more diligent at golfing than he is at church attendance. The number of Sunday church services Obama has attended since the Inauguration doesn't get beyond counting on one hand, even bypassing the pews at Christmas.

Numerous liberal outlets have giddily promoted that Obama is a Christian because he receives little religious and inspirational quotes on his BlackBerry from his adviser DuBois. (Matt Lauer: “It's spirituality meets high-tech! That's pretty good!”) They also routinely careen around the idea that if Obama is a Christian, he came to Jesus by being for two decades a Jeremiah Wright we-deserved-9/11 Christian. Cohen and Shear naturally avoided that:

WaPo on Bill Clinton: 'Even the Master Can't Fix Everything'

As the Joe Sestak job-offer scandal took a weird turn on Friday -- Bill Clinton offered me an unpaid, obscure presidential advisory panel placement to dissuade me from a Senate run? -- The Washington Post found in the new story a chance to hail Bill Clinton. At the very end of a Saturday report headlined "Bill Clinton has evolved into Obama's Mr. Fix It," reporters Philip Rucker and Paul Kane slipped into fanboy mode:

Sestak said Clinton briefly brought up Emanuel's suggestion that if Sestak dropped out he might end up on a presidential advisory board for the Pentagon or the intelligence community. Sestak flatly turned him down.

"I knew you'd say that," Clinton replied. Even the master can't fix everything.

Left unsaid: if Clinton is "the master," why is Obama president instead of his wife? (Or do you just repeat "Even the master...") On the front page, the Post seemed to be buying this square-peg-for-round-hole tale about this weird, very unpersuasive offer no one would accept. Reporter Michael Shear tried playing cute and light in his opening, that Obama "resisted acknowledging what the top West Wing lawyer finally admitted on Friday: This administration plays politics. And not always effectively."

Reporters and editors at the Washington Post are defensive about new health-care ads mocking President Obama's vacation. In Monday's Washington Post, after disposing with the official line that no news will be made during the time off, reporter Michael D. Shear insisted Obama's vacation was brief, next to those lazy Bushes:

The Washington Post put the first White House celebration of Gay Pride Month on the front page Tuesday, but reporter Michael Shear left out some of the president’s most liberal and most supportive lines from the transcript. Obama pledged to be "an ally and a champion" of the gay left’s agenda and hailed gay activists "who have refused to accept anything less than full and equal citizenship."

He implied there was still work to do with all those fuddy-duddies who still followed the "worn arguments and old attitudes" from old sources like the Bible:

There are unjust laws to overturn and unfair practices to stop. And though we've made progress, there are still fellow citizens -- perhaps neighbors or even family members and loved ones -- who still hold fast to worn arguments and old attitudes, who fail to see your families like their families and who would deny you the rights that most Americans take for granted. And I know this is painful. And I know it can be heartbreaking.

It’s uncommon for newspapers to hype Sunday morning TV interviews in advance, especially if presidents aren’t involved. But Saturday’s Washington Post carries this page 3 story: "In TV Appearance, Powell Plans to Answer Right-Wing Critics." Reporters Michael D. Shear and Perry Bacon Jr. play up a GOP feud: "Under intense fire from the right, former secretary of state Colin L. Powell is preparing to answer his Republican critics this weekend in a television appearance that is likely to add fuel to his long-standing feud with top conservatives in his party."

Message to liberal Post readers: the conservatives are going to get thrashed tomorrow on CBS's Face the Nation, so don’t miss it.

Shear and Bacon didn't tell readers that this "feud" was fueled by the liberal media, by CBS Face the Nation host Bob Schieffer, who asked former vice president Dick Cheney whether Powell or Rush Limbaugh was a better voice for Republicans. They only explained "Rush Limbaugh and former vice president Richard B. Cheney have attacked Powell in recent days as a traitor to his party."

Naming a man who wants to levy sin taxes on soda pop to be the head of the federal Centers for Disease Control and Prevention (CDC) might not be the politically wisest thing for President Obama to do, especially on the heels of massive TEA Party protests. But then again, with media outlets like the Washington Post leaving that controversy unmentioned, perhaps the White House calculated correctly that the risk of staffing the federal government's public health branches with nanny state activists was minimal.

On May 15, President Obama announced in a press statement that New York City health commissioner Thomas Frieden will take the helm of the CDC in June. Reporting the story in the May 16 paper were Post staffers Debbi Wilgoren and Michael D. Shear (along with some help from staffer Ceci Connolly).

Wilgoren and Shear allowed "an industry-funded group" spokesman to slam Frieden as "barely recogniz[ing]" the line between "government's responsibility in regulating health and what is the individual's responsibility," yet they curiously omitted perhaps the clearest example of the same, Frieden's support of a penny-per-ounce soda tax. This even though the Senate Finance Committee held a hearing on the idea earlier in the week.

A terse one-paragraph mea culpa by a White House staffer now qualifies as a "profuse apology" at least when it's the Obama White House, and the paper reporting the story is the Washington Post.

The "Obama Team Moves to Keep Its Distance From Lobbyists," the page A4 Washington Post headline insisted. Yet as the article made clear, the spatial separation is walking, if not throwing distance.

The November 12 story by staffer Michael Shear began by noting that Obama "campaigned as an anti-Washington candidate" and that his transition team "made it clear" that the president-elect "would seek to build on that theme over the next two months."

As evidence of that, Shear explained the transition team's rules "that restrict how federal lobbyists can participate" in the Obama transition. Yet Shear failed to note how the standard has shifted over the course of Obama's campaign (emphasis mine):

Washington Post staffer and chief "Macaca-gate" peddler Michael D. Shear filed an October 9 story from Waukesha, Wisconsin, on the McCain rally there. Joined by fellow reporter Perry Bacon Jr., Shear focused on the "anger" in the crowd at the liberal media. Their lead paragraph:

On May 13, John McCain supporter John Hagee issued an apology to the Catholic League for controversial anti-Catholic comments he's made in the past. "Catholic League President William Donoghue [sic] accepted the apology," noted Washington Post's Michael D. Shear in the midst of his 8-paragraph story published the following day.