My Wednesday blog on PBS anchor Gwen Ifill emceeing a gay group's fundraiser that honored HHS Secretary Kathleen Sebelius for implementing ObamaCare drew some attention across the web, including The Washington Post and The Huffington Post. WashPost media blogger Erik Wemple looked askance at the PBS star's appearance of a conflict of interest. But the strongest response came from PBS ombudsman Michael Getler: he declared Ifill should have skipped the event.

Ifill responded to Wemple's questions by claiming she isn't being paid, she wasn't going to honor Sebelius, and she accepted without knowing of the honor. She was just going to say "welcome," announce some anodyne agenda items, and "announce dessert." The Whitman-Walker Clinic is "just using me as a draw." That's still using her name (and PBS cachet) to raise money for gay-left lobbying, legal services, and health services. Wemple wrote: 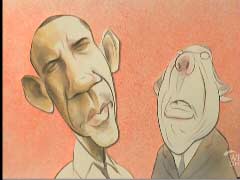 PBS recently responded to accusations of a liberal slant to its July 23 Need to Know program which featured satirist Andy Borowitz making fun of Sarah Palin’s intelligence as the show's executive director Shelley Lewis claimed that, because the previous week's episode had featured a segment that was critical of President Obama, the program in reality has been balanced in going after political figures. According to TVNewser, quoting from Michael Getler's July 28 "The Ombudsman Column" on the PBS Web site, Lewis argued: "Is a little joking about Ms. Palin's penchant for malaprops really such a big deal? Last week, editorial cartoonist Steve Brodner was pretty tough on President Obama, and we heard plenty from Obama fans about how unfair we were, how right-wing we were, etc. We do try to have some fun at both sides' expense..."

But the July 16 segment that poked fun at Obama actually criticized him for not being liberal enough in keeping his campaign promises as cartoonist Steve Brodner was shown drawing sketches of Obama while a voiceover of the cartoonist lamented that "the presumed anti-war Obama became the 30,000 more troops Obama," and that "the previous stimulus advocate Obama who faced McConnell finally and a vocal conservative movement, he didn't campaign consistently for the stimulus that he mentioned in the State of the Union, wound up advocating for that along with deficit reduction, making him at least partly like McConnell."

PBS Ombudsman Michael Getler on Tueday addressed Tavis Smiley's claim that Christian terrorists commit far more violence than Muslim ones. Smiley also issued a statement that defended his comments, though it misrepresented what those comments actually were.

"I don't think he made his case, or even came close," Getler said. He rightfully noted that the 2000 Columbine massacre, Smiley's only example of supposed Christian terrorism, "had nothing to do with Christianity." In fact, as Brent Bozell noted in his column today, the shooters even "mocked students who cried out for God to save them."

Though Getler should be applauded for noting Smiley's total failure to offer a convincing argument, he seems to suggest that a convincing case could be made, but simply wasn't in this instance. "One would think," Getler states, "that Smiley would have been better prepared to make what was certain to be a controversial case." 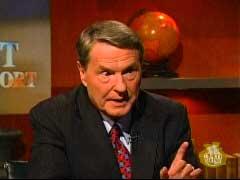 PBS Ombudsman Michael Getler agreed with conservative letter-writers that the NewsHour covered Climategate "lightly and well after the fact," even though he expressed the standard liberal belief that the "overwhelming" evidence is on the man-made dramatic warming side, and there's a "danger of establishing false equivalence" -- i

"Sesame Street" producers are getting criticized for a parody that suggested Fox News was "trashy," and the ombudsman for PBS says that the criticism is justified.

PBS Ombudsman Michael Getler is pleased as punch in his "Ombudsman's Mailbag" to note that PBS was the only place on broadcast TV for people to enjoy three hours of prime time devoted to the Democratic convention. But even though many PBS fans naturally loved that, some remained in a highly agitated left-wing state that too many white males were ruining the stew. It's one thing to complain about the need for more minorities, but some of these letters to Getler were simply...bigoted:

“Mainstream media coverage of the Reverend Jeremiah Wright has drawn a round of barking from some of their own in-house watchdogs,” FNC's Brit Hume noted in his Monday night “Grapevine” segment. Hume started by highlighting how PBS ombudsman Michael Getler criticized the soft approach of Bill Moyers in his interview with Wright: “Inflammatory, and inaccurate, statements that Moyers himself laid out at the top of the program went largely unchallenged” and “there were not enough questions asked and some that were asked came across as too reserved and too soft.”

Hume next turned to New York Times public editor Clark Hoyt's disappointment in the paper for putting a review of Wright's performance in appearances ahead of checking what Wright contended against the reality, scolding his employer: “It was a performance strangely lacking in energy at a potential turning point in the election.”