Lisa Bloom describes herself as a "Fighter for justice at my law firm, The Bloom Firm," and is "legal analyst for NBC News & Avvo."

NBC and Avvo should seriously reconsider their relationships with Ms. Bloom. In a series of tweets on Tuesday, she seethed over the grand jury's failure to indict Darren Wilson in the shooting death of Michael Brown in Ferguson, Missouri. Since then, she's been a whirling dervish of dementia over "#WhitePrivilege." First, let's look at the crucial Tuesday tweets which exposed Bloom's fundamental dishonesty about Ferguson:

June 13 marks twenty years since O.J., Simpson’s ex wife and boyfriend were found murdered outside their condo in California, and MSNBC’s Joy-Ann Reid chose to use her June 12 The Reid Report  program to discuss the O.J. Simpson and how in Joy-Ann Reid’s words “race played into that trial.”

Lisa Bloom, legal analyst for NBC News and daughter of feminist lawyer Gloria Allred, appeared with Reid and proclaimed “I have a race discrimination case going on right now. I’m sure hoping I get African-Americans on the jury. Because I don't think whites really understand the black experience here in Los Angeles.” [See video below.]

When the “Lean Forward” network hired Ronan Farrow last October to host his own weekday news/interview show, the 20-something son of actress Mia Farrow was hailed as “an original thinker” who could bring his 250,000 Twitter followers to watch him on MSNBC.

However, only a month after Ronan Farrow Daily debuted in mid-February, an anonymous source inside the channel told the New York Daily News that Farrow's ratings have been poor, and his program “has been a disaster for MSNBC” because the young host “sort of stinks on TV” and “hasn't turned out to be the superstar they were hoping for,” even in the relevant demographic of younger viewers ranging from 25 to 54 years of age.

Just when you thought it was finally safe to watch news programs and be free of any references to slain black teenager Trayvon Martin, along comes Monday's edition of Ronan Farrow Daily in which the MSNBC host and a legal analyst linked Martin's tragic life and a new study to claim he was a victim of a system that punishes African-American preschool children three times more often than their Caucasian counterparts.

After Farrow called the report “shocking, and I really mean this, shocking,” guest Lisa Bloom declared that “Martin was suspended three times” during preschool for minor violations, which makes him “a perfect example, unfortunately, very sadly, of this trend.”

On Friday's PoliticsNation, MSNBC legal analyst Lisa Bloom complained that prosecutors did not "have the guts" to make an issue of race in trying to convict George Zimmerman. She began:

During live coverage of the Supreme Court's gay marriage rulings on Wednesday, NBC legal analyst Lisa Bloom could barely contain her enthusiasm at the decisions overturning the Defense of Marriage Act and Proposition 8: "There is no question that this is a sweeping historic decision for gay rights....I think this is only the beginning, by the way. This is the decision today, but this is going to engender many more cases to come to further protect gay rights." [Listen to the audio or watch the video after the jump]

Bloom went on to praise the liberal justices making up the majority opinion: "...all three women on the Court voted with the majority, they tend to be the pro-civil rights bloc."  She further declared the cases to be "some of the biggest civil rights issues of our time."

On Monday's NBC Today, co-host Savannah Guthrie and legal analyst Lisa Bloom worried about Boston Marathon bombing suspect Dzhokhar Tsarnaev not yet being read his Miranda rights after being taken into custody on Friday, with Guthrie arguing: "...officials are citing what's known as the public safety exception....As time passes, does the justification for that exception grow weaker? Are they on, I guess, less strong ground?" [Listen to the audio or watch the video after the jump]

Bloom proclaimed: "Well, it sure does, because as you know, Miranda rights are a bedrock constitutional principle....The public safety exception is a very narrow exception, there has to be an imminent threat to the public. As the clock keeps ticking, hours and days pass, it certainly seems less imminent."

CNN Asks If Bush Officials Should Be Tried for War Crimes

A CNN headline during Tuesday's 11 a.m. hour of Newsroom asked, "Should Bush officials be tried for war crimes?" CNN legal analyst Lisa Bloom argued that the U.S. should submit to the jurisdiction of the International Criminal Court for the mass murder of Iraqis that far exceeded the 9/11 atrocities.

Bloom downplayed the 9/11 terror attacks in the face of the Iraq War. When anchor Ashleigh Banfield noted that America responded to 9/11 with force and not in a "sanguine" manner, Bloom compared it to the Iraqi casualty count: "And that was 4,000, not 100,000, not 10 years."

MediaBistro's TVNewser blog reported on Thursday that NBC's Today hired former CNN legal analyst Lisa Bloom as their new legal analyst. Bloom, the only child of notorious celebrity lawyer Gloria Allred, is a chip off her mother's block, given her liberal record both on the air and online, particularly on the issue of same-sex "marriage".

The attorney blasted California's voter-approved Proposition 8 in a January 28, 2010 editorial for CNN.com titled "Prop 8 is simply unconstitutional." Bloom used personal anecdotes to contrast "reckless heterosexual nuptials" with the 16-year relationship of her friends Wilbert and Carlos, who, in her words, are "second-class citizens in their own country." She dropped the inflammatory hint at Prop 8 supporters later in her piece: 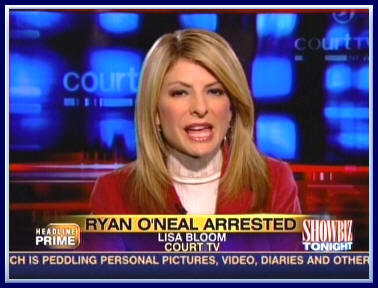 CNN legal analyst Lisa Bloom condemned the voter-approved Proposition 8 in California in an editorial on CNN.com on Tuesday, and labeled the Supreme Court’s Lawrence v. Texas decision in 2003 as “the gay community's Brown v. Board of Education.” Bloom would later imply that the supporters of Prop 8 were “lunatic-fringe bigots.”

The legal analyst began the January 12, 2010 editorial, titled “Prop 8 is simply unconstitutional,” by contrasting “reckless heterosexual nuptials,” such as the 23 marriages of a grandmother in Indiana, with her friends Wilbert and Carlos, “‘free men’ together 16 years and lovingly raising a son, [who] are shut out of the 1,100 federal and hundreds of state legal benefits that come with marriage.” She continued by dropping another personal anecdote, citing the “children in same-sex families: kids like my friends’ son Dorian, growing up with the sting of knowing that his parents are second-class citizens in their own country.” 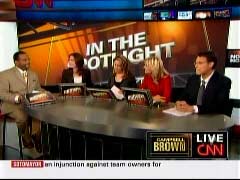 CNN’s Roland Martin on Wednesday’s “No Bias, No Bull” program featured another panel which leaned overwhelmingly to the left, during a discussion about the California Supreme Court upholding Proposition 8. Four of the five participants -- CNN correspondent Erica Hill, Lisa Bloom of TruTv, New York Observer columnist Steve Kornacki, and the Reverend Byron Williams of Resurrection Community Church in Oakland, California all sided with advocates of same-sex “marriage.”

Rev. Williams, who is affiliated with the liberal People for the American Way, argued that the decision “seems to go against our democratic values.” Hill asked the pastor, “Should that decision on marriage be left up to different religions, different faiths to make, and leave this to be more of a civil matter? And if that’s the case, why should God enter it at all?” Kornacki argued that there was an “inevitability” to the legalization of same-sex “marriage,” explaining that “you’ve got four states legalizing it. You’ve got people under 35 supporting it overwhelmingly. I mean, isn’t this just really a question of time, and we shouldn’t be that exercised about it?” Bloom thought that it was a “huge civil rights issue, and this is the first court ruling that I’m aware of that says that a majority vote -- a bare majority vote, can take away the constitutional rights of a protected minority group.”