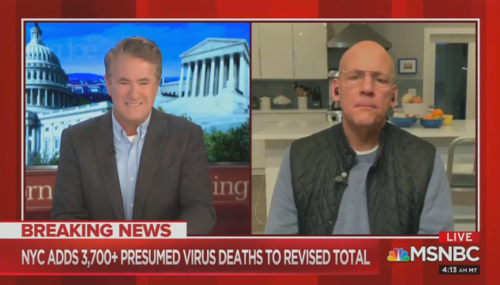 Mark Finkelstein
On Morning Joe, Scarborough says: "you can't be conservative and support Donald Trump. Trumpists are even saying that now." But Biden has boasted he'd be "the most progressive president in history." This is whom Scarborough is effectively telling conservatives they must support? Brad Wilmouth
On Wednesday's Deadline: White House on MSNBC, fill-in host John Heilemann joined in on the pettiness of some journalists claiming that it is "racist" for President Donald Trump to accurately acknowledge that the coronavirus infections first appeared in China by calling it the "Chinese virus." Mark Finkelstein
We've all witnessed the shocking scenes of racists attacking Asian-Americans, accusing them of responsibility for the coronavirus! Oh, wait: we've seen no such thing. But that didn't stop MSNBC political analyst Karine Jean-Pierre from MoveOn.org from spouting off late Monday afternoon that talking about the coronavirus as "Chinese virus" (as President Trump has) was… 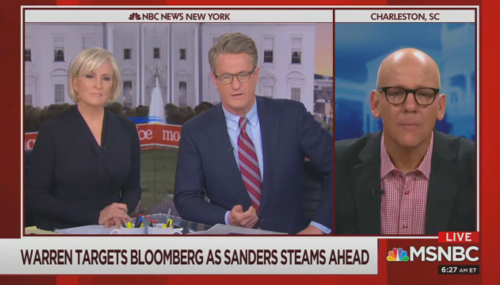 Mark Finkelstein
Joe Scarborough caught a lot of flak from the left earlier this week for suggesting that Elizabeth Warren drop out of the race. Just wait till the lefties get hold of what Scarborough & Co. said this morning about Warren's sustained attacks on Mike Bloomberg during last night's debate. The panel variously described Liz's arrows [you should excuse the expression] against poor… Mark Finkelstein
Nicolle Wallace's MSNBC show predicts pure doom and despair for Democrats.  A.B. Stoddard predicted that at tonight's Democrat debate in Nevada, the candidates are sure to focus their fire on Mike Bloomberg, letting Bernie Sanders off the hook. That in turn would lead to his nomination. Stoddard foresaw Sanders getting "slaughtered" in the general election, with President… Mark Finkelstein
On Morning Joe, Joe Scarborough says "everybody knows" the results of the spiked Des Moines Register poll, and strongly suggests it is stronger for Bernie Sanders than the Emerson poll, which shows Sanders with a 7% lead. But Scarborough declines to release the results. Kyle Drennen
On Wednesday, the crew of MSNBC’s Morning Joe all agreed that Tuesday night’s Democratic debate was a “dull” and “lifeless” event in which “nobody looked good.” According to co-host Joe Scarborough, the only thing the debate accomplished was to show the 2020 contenders “are still not ready for prime time.” Mark Finkelstein
Morning Joe absolutely unloads on Elizabeth Warren this morning. The proximate cause was the release of her memo on behalf of a corporate client seeking to avoid responsibility for cleaning up a toxic-waste site.  But the broader issue addressed was her lack of authenticity/honesty across the board. John Heilemann says her campaign realizes there's a "whiff of fraudulence"… Mark Finkelstein
The liberal media is not known for its deep and abiding respect for the US military. Yet in the opening segment alone of today's Morning Joe, there were no fewer than nine instances of members of the panel referring to Lt. Col. Alexander Vindman as a "hero" or Purple Heart recipient. For good measure, Mike Barnicle melodramatically described him as "wearing the cloth of our… MSNBC Looks Forward to 'Cannibalization of the White House'

Alex Christy
Before Ambassador to the European Union Gordon Sondland gave testimony before the House Intel Committee 's Wednesday impeachment hearing, those occupying the desk on MSNBC's pre-game show could hardly contain their excitement. They eagerly awaited the downfall of the Trump Administration and the schadenfreude that would inevitably come with seeing "Trumpists" react to… Ryan Foley
Not surprisingly, the panel on Friday’s edition of Real Time weighed in on the impeachment inquiry that has sucked up all of the oxygen on Capitol Hill. Host Bill Maher suggested that Republicans’ behavior throughout the impeachment inquiry indicates that they “don’t believe in democracy anymore.” In addition, the panel took aim at Fox News; slamming the primetime… Ryan Foley
Just hours after MSNBC’s John Heilemann compared the idea of holding migrant children and their families in detention centers as they await adjudication of their asylum claims to “concentration camps,” primetime host Rachel Maddow had equally hyperbolic analysis. According to Maddow, the migrant detention centers are “kind of like Guantanamo.” Ryan Foley
Not surprisingly, the far-left panel on Wednesday’s Deadline: White House did not react favorably to the Trump administration’s proposal to detain migrant families seeking asylum for longer than 20 days. Fill-in host John Heilemann suggested that President Trump wants to hold migrant children and their families “in detention centers indefinitely,” an idea which he argued…
Subscribe to John Heilemann