Lauer Sticks Up for Obama On Charge He's Soft on Terror: 'Get Rid of It' 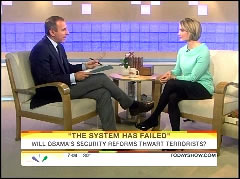 NBC's Matt Lauer dismissed the idea that Barack Obama was weak on terrorism, as the Today co-anchor, on Wednesday's show, wanted to "get rid" of the notion that "the President doesn't take the threat of terrorism seriously enough because he's not out there talking about it every day." Lauer, in a political roundup segment in the 7am half hour, also spun the retirements of Democratic Senators Chris Dodd and Byron Dorgan as something "that might work out better in the long haul," for the Dems. 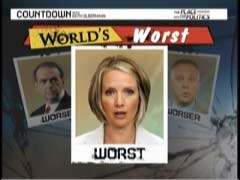 On Monday’s Countdown show, MSNBC host Keith Olbermann named former White House Press Secretary Dana Perino "Worst Person in the World" – ahead of Mike Huckabee and Glenn Beck – in response to Perino’s November 24 appearance on FNC’s Hannity show in which she insisted that the Fort Hood massacre should be called a "terrorist attack," and, while referring to the often cited fact that the Bush administration prevented any additional terrorist attacks on American soil for the rest of President Bush’s time in office after the 9/11 attacks, she flubbed the line and claimed "we did not have a terrorist attack on our country during President Bush’s term."

Olbermann, who was quick to label the murder of abortionist Doctor George Tiller as terrorism, but has a history of attacking FNC personalities who insist that the Fort Hood massacre should be called terrorism, seemed to pick up on a posting from the far left ThingProgress.org as he attacked Perino’s intelligence:

But our winner, former White House Press Secretary Dana Perino. That this is not a smart person, not a sensitive person, maybe not a person person, has long been pretty clear. But this, this takes it to a new level.

After playing a clip of Perino contending that she feels "very strongly" that the Fort Hood massacre was a "terrorist attack on our country," followed by the clip of her mistakenly saying no terrorist attacks occurred in America while Bush was President, Olbermann concluded:

As NewsBuster Jeff Poor reported Thursday, the Obama administration earlier in the day tried to shut Fox News out of an interview with pay czar Kenneth Feinberg that was to be part of a pool that the cable network would always be involved in.

On "Fox News Sunday," when the panel discussion turned to this subject, Perino really went after the White House for what she called conduct "unbecoming" and an impediment to our efforts to "help emerging democracies get journalists and government officials to talk to one another" (video embedded below the fold with partial transcript):

White House press secretary Dana Perino's last briefing was delicious beyond words...especially her tribute to Tony Snow. Do yourself a favor and click on the embedded video below:

After the firestorm that erupted Saturday over the Associated Press's classless story on the death of former White House Press Secretary Tony Snow, I was hoping that the possibly-chastened wire service could get through its coverage of his funeral without getting in any gratuitous digs.

In that horrid Saturday story (blogged at NewsBusters and BizzyBlog), the AP's Douglass K. Daniel, with the assistance of longtime Bush basher Jennifer Loven, felt it necessary, within hours of Snow's passing, to characterize him as "not always (having) a command of the facts," questioning reporters' motives "as if he were starring in a TV show broadcast live from the West Wing," and turning his briefings into "personality-driven media event(s) short on facts and long on confrontation." In a further descent into tastelessness, they felt it necessary to tell us what Snow's salary at the White House was -- something I don't believe I have ever seen written in a story on anyone else's death. (11:00 a.m. update: See this comment below for an exception.)

Covering Snow's funeral Thursday, AP reporter Ben Feller stayed classy almost to the end. But then he apparently couldn't help himself, and followed the execrable example of his Saturday predecessors in his story's third-last paragraph.

It's Memorial Day, and the good folks at the New York Times thought it appropriate to not only attack the President's position on a new G.I. Bill, but also to despicably lambaste him for "[h]aving saddled the military with a botched, unwinnable war," and "having squandered soldiers’ lives and failed them in so many ways."

Thankfully, White House press secretary Dana Perino has already issued a written statement concerning this deplorable act by the Times on a sacred day when our nation commemorates its fallen heroes.

But before we get there, here are some of the atrocities the Times editorial staff felt were appropriate to offer their readers on this solemn holiday (emphasis added throughout, h/t FishbowlDC):

Helen Thomas Seizes on Photo of Dying Baby to Accuse US

Q. Is there any level to which Helen Thomas won't stoop?

That's my conclusion, based on Thomas's exchange during today's press gaggle with White House Press Secretary Dana Perino. Here is the front page of today's Washington Post to which Thomas refers [warning: graphic image]. A slide-show from WaPo's web edition contains another photo of what appears to be the same child, with this legend:

Two-year-old Ali Hussein is pulled from the rubble of his family's home in the Shiite stronghold of Sadr City in Baghdad, Iraq on Tuesday, April 29, 2008. The child, who later died in hospital, was in one of four homes allegedly destroyed by U.S. missiles. More than two dozen people were killed when Shiite militants ambushed a U.S. patrol in Baghdad's embattled Sadr City district, bringing the death toll in area on Tuesday to more than 30, a U.S. military spokesman and Iraqi officials said. (AP Photo/Karim Kadim)

Here's the exchange between Thomas and Perino.

HELEN THOMAS: Do you think it's worth a million Iraqi deaths, to continue to bomb the Iraqis who did nothing to us?

White House press secretary Dana Perino appeared on The Daily Show Thursday night, and host Jon Stewart disparaged former spokesman Ari Fleischer as looking like a caveman. When Perino protested that Fleischer had a female following, Stewart cracked "Is that like the women who visit murderers in prison? Like the serial killer kind of a thing?" Perino said most questions don’t fluster her, except when Helen Thomas will "ask a question that is not based on fact." Stewart asked:

"Now do you find, now that the mood has shifted, I mean, you went through a period where, I mean, they were going through press secretaries, Ari Fleischer, McClellan, Tony Snow, and then we always used to make a little attractiveness chart because it seemed like the evolution of man in terms of --

Stewart: Because Fleischer was, let's face facts, tough to look at. (Laughter) 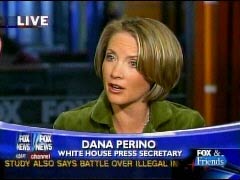 As conditions in Iraq improve to the point where even adamant Iraq War opponents concede the surge has worked, the press seems less interested in questioning the Bush administration on the war. On the March 6 edition of "Fox and Friends," co-host Brian Kilmeade asked White House press secretary Dana Perino when she last received a question about Iraq.

Over the course of at least nine months, CNN’s John Roberts has regularly labeled the troop surge in Iraq, the amassing of 28,000 additional troops in the country, the "so-called surge." Liberals, such as George Lakoff, have objected to the term "surge" in the past, since using the term would "subscribe to Bush’s misleading frame." Roberts' latest use of the phrase took place on Monday’s "American Morning." He posed the following question to White House Press Secretary Dana Perino. "The President is also going to be talking about Iraq tonight, Dana. He'll be talking, I guess, about the so-called surge, progress that's been made in terms of security and safety there. But there still has been little political progress. What's the President's message to Nouri Al-Maliki and the people who are in charge there in Iraq going to be tonight?"

It's a first. The New York Times is admitting that one of their headlines slamming the Bush White House was an outright lie. Such a lie that they had to change it when the White House complained. Of course, the original subhead had trumpeted how White House spokesman Dana Perino lied to the American people, but when Perino pointed out that she never even said what the Times claimed, they had to face the truth and change the original. This is the sort of junk "reporting" you get when you have an agenda to push... truth be damned.

On the 19th, the Times had published a front-page story on the CIA's destruction of interrogation tapes made of Islamofascist detainees, but the subhead made it seem as if the White House was straight out lying about their knowledge of the situation. The original subhead screamed "White House Role Was Wider Than It Said," but what was it the White House "said" about the issue, anyway?

Turns out, not a thing. Literally... not a single thing!

Fox News's Bill O'Reilly must have heard about this wonderful event, for on Monday's "O'Reilly Factor," the conservative host played some of the encounter for his viewers, and then offered his own opinion.

What follows is a partial transcript of this segment (video available here):