After forcing gun control into headlines only hours after the July 20 Aurora massacre, CNN gave a voice to anti-gun advocates on Monday and Tuesday in the wake of Sunday's Wisconsin shooting.

One of the key parts of Thursday's Supreme Court ruling regarding the President's healthcare bill was that the fine for not complying with the individual mandate must be considered a tax in order for it to be constitutional.

On CNN's State of the Union Sunday, host Candy Crowley didn't think this was a very important distinction (video follows with transcribed highlights and commentary):

Media silence greeted video of an Occupy Wall Street protester vowing to burn New York City to the ground and toss Molotov cocktails into a Macy's department store, yet there was "non-stop media coverage" of the alleged, but never proven, use of the N-word at one Tea Party rally, NewsBusters publisher Brent Bozell noted last night on Fox News Channel's Hannity.

"Look at the violence you're starting to see, the rapes, the assaults... I'm starting to hold the national news media responsible for this as well" as well as New York City Mayor Mike Bloomberg, the Media Research Center founder added :

CNN's White House correspondent Dan Lothian made headlines with his ridiculous softball question to President Obama on Sunday. However, as NewsBusters has documented, Lothian has posed such a soft question to Obama before, and has shown some liberal bias in his past reporting.

Lothian asked the President at Sunday's press conference in Hawaii if he thought the Republican candidates, who supported the practice of waterboarding, were "uninformed, out of touch, or irresponsible." Fox News analyst Bernie Goldberg later called it "the most ridiculous question I have ever heard by a regular reporter from a so-called mainstream news outfit. Ever."

Goldberg on CNNer's Softball to Obama: 'Most Ridiculous Question I Have Ever Heard'

As NewsBusters previously reported, CNN White House correspondent Dan Lothian at a press conference at the APEC summit in Hawaii Sunday asked President Obama if Republican presidential candidates were "uninformed, out of touch, or irresponsible."

On Fox News's O'Reilly Factor Monday, political analyst Bernie Goldberg said, "That was the most ridiculous question I have ever heard by a regular reporter from a so-called mainstream news outfit. Ever." (video follows with transcript and commentary):

CNN WH Correspondent Asks Obama if GOP Candidates Are 'Uninformed, Out of Touch, or Irresponsible'

Remember during 2008's Democratic primaries when Saturday Night Live did a hilarious sketch mocking a CNN debate as being a disgraceful suck-up to then presidential candidate Barack Obama?

A repeat of this happened in real life Sunday evening when during a press conference from the APEC summit in Hawaii, CNN White House correspondent Dan Lothian actually asked the President if the GOP candidates were "uninformed, out of touch, or irresponsible" (video follows courtesy Right Scoop with transcript and commentary, photo courtesy AP):

“There weren’t a lot of hard questions in this news conference,” FNC’s Bret Baier observed on Special Report in the understatement of the night. Indeed, in the first question posed at the late Wednesday afternoon session, Caren Bohan of Reuters reflected the collective glow of the White House press corp basking in Barack Obama’s glory:

You racked up a lot of wins in the last few weeks that a lot of people thought would be difficult to come by. Are you ready to call yourself the “comeback kid”?

(Katie Couric gushed on the CBS Evening News over how “the President isn’t calling himself the ‘comeback kid,’ but some other folks are.” A pleased George Stephanopoulos teased ABC’s World News by yearning for more Obama success in 2011: “The President takes a victory lap. How the Christmas season became what he called a ‘season of progress.’ Will it continue in the new year?”)

At the 4:15 PM EST press conference carried by the broadcast networks, ABC’s Jake Tapper Tapper offered his “congratulations” on the repeal of Don’t Ask/Don’t Tell as he hit Obama from the left on whether it “is it intellectually consistent to say that gay and lesbians should be able to fight and die for this country, but they should not be able to marry the people they love?” Audio compilation: (MP3 clip)

President Obama’s recess appointment of Dr. Donald Berwick – a controversial advocate of socialized medicine and of government rationing of health care, particularly for the elderly – as head of the Medicare and Medicaid programs has so far received no attention on ABC’s World News or on the CBS Evening News, while the NBC Nightly News on Thursday devoted just 38 seconds to the President’s controversial move that circumvents a possibly bruising Senate confirmation hearing, barely touching on the nature of Berwick’s beliefs and their possible implications for the elderly. Broadcast network morning newscasts have similarly shown little to no interest in the subject. CNN’s The Situation Room devoted a full story to the appointment on Wednesday, but did little better than NBC in informing viewers of the significance of Berwick’s beliefs.

By contrast, FNC’s Special Report with Bret Baier on Wednesday relayed to viewers that Berwick has not only advocated the type of socialized medicine that currently limits access to health care in Britain – favoring a non-free market system based on wealth redistribution – but he has also spoken in favor of government limiting access to some health care procedures for the elderly in favor of younger patients.

FNC correspondent Jim Angle filled in viewers on how the elderly would be treated under a system Berwick might advocate:

CNN's Lothian: Nobel Prize an 'A' for Effort, Could Help Pres. With Health Care 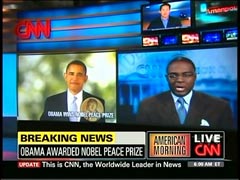 CNN’s White House correspondent Dan Lothian, on Friday's American Morning, saw nothing but pluses for President Obama’s reception of the Nobel Peace Prize. Lothian guessed that “the President obviously is getting an ‘A’ for effort here,” and even went so far to speculate about whether the reward could help the Democrat “push through on...health care as well...so this could help him.”

Anchors Kiran Chetry and John Roberts turned to the correspondent right out of the gate at the beginning of the program at 6 AM EDT. Chetry asked if there had been any official reaction from the White House at that early hour, and Lothian confirmed that the administration hadn’t released any statement at that point. He continued that “two things came to mind when this shocking announcement was made. First of all, that the President obviously is getting an ‘A’ for effort here. The President has made overtures and talked about, since he was running for president, that he wanted to be one who would engage in dialogue.” The White House correspondent cited the Obama administration recent work with Iran and the President “trying to get both the Israelis and the Palestinians to jump-start the peace process there.” 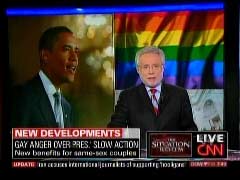 Two reports on CNN’s Situation Room on Wednesday about President Obama’s extension of benefits to same-sex partners of federal employees and the campaign to overturn Proposition 8 in California featured only left-wing sound bites, and none from conservative opponents of homosexual activists.

The first report from correspondent Dan Lothian, which aired just after the beginning of the 4 pm Eastern hour of the CNN program, included clips from a homosexual federal employee and his “husband” who was afflicted with pancreatic cancer, as well as Joe Solmonese of the liberal Human Rights Campaign. Over an hour later, Jessica Yellin’s report on Proposition 8 opponents’ efforts to overturn the ballot initiative which made same-sex “marriage” illegal again, featured two leaders from California “progressive” organizations, the Courage Campaign, and Equality California.

CNN’s Dan Lothian, during a report on Tuesday’s "The Situation Room," downplayed Hillary Clinton’s "sniper fire" statement on her trip to Tuzla, Bosnia during her time as First Lady, referring to it as a "misstep." Lothian, in his introduction to the report, referenced the "dangerous 1996 visit to Bosnia" and played Clinton’s now-famous false account of her arrival in the war-torn country. As file footage of Clinton’s arrival played, Lothian pointed out how the "video shot that day seemingly contradicts her version of events. No one seems to be running or ducking, and there does appear to be a ceremony." The video, which was first pointed out on NewsBusters by Rich Noyes, flatly proves Clinton’s statement to be false, not just "seemingly contradict" it.