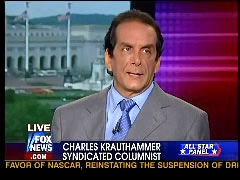 One reason for that, Krauthammer contended, is that after he “gave the famous speech in Philadelphia” on race in March of 2008, in which “he did not renounce Jeremiah Wright” as “he blamed everybody for racism -- black, white and grandmother, except himself,” he nonetheless “was hailed by a supine press as the second coming of Lincoln at Cooper Union. So after, that you think you can say anything on race and be hailed as a genius.”

Indeed, hours after Obama's Tuesday, March 18, 2008 address, MSNBC's Chris Matthews, NewsBusters recounted, praised it as “worthy of Abraham Lincoln” and also claimed it bypassed Martin Luther King Jr.'s “I Have a Dream” address as the “best speech ever given on race in this country.”

Krauthammer on Press/Obama: 'The Hot Sex is Over, They're In the Cigarette Stage' 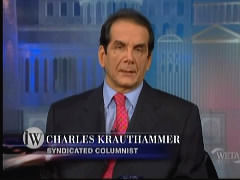 NPR's Nina Totenberg scolded the more adversarial approach some in the White House press corps took to President Obama during Tuesday's press conference, but on Inside Washington this weekend columnist Charles Krauthammer rejected the notion the media's honeymoon is “over,” as he cracked:

The hot sex is over, they're in the cigarette stage right now. You get a question or two that's slightly obstreperous, but the adulatory coverage is still all wall-to-wall.

That's a comedic improvement over what he offered Tuesday night on FNC when he suggested “it looked as if the stupor that the press has been in for the last six months is lifting slightly,” before he quipped: “I say that as a psychiatrist who has a lot of experience in watching these things.” 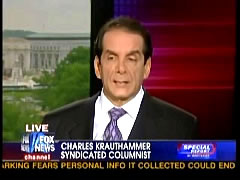 Columnist Charles Krauthammer noted on FNC's Special Report that while “there wasn't exactly aggressiveness on the part of the press with a couple of exceptions” during the afternoon presidential press conference, “it looked as if the stupor that the press has been in for the last six months is lifting slightly.” Krauthammer quipped: “I say that as a psychiatrist who has a lot of experience in watching these things.”

Earlier in the program, Brit Hume declared “the head over heals phase of the honeymoon with the press is over” and he speculated: “I think the reporters down there were tired of being criticized for being soft on Obama.”

Evan Thomas: Obama Is a 'Brave,' 'Great Teacher' Who 'Stands Above' Us All

Newsweek editor-at-large Evan Thomas appeared on this weekend's edition of Inside Washington and lauded President Obama as a "brave," "great teacher" who "stands above everybody." These comments were only slightly less hyperbolic than a gushing assertion on Friday's Hardball. On that program, the journalist cooed, "I mean in a way Obama’s standing above the country, above – above the world, he’s sort of God."

Moderator Gordon Peterson prompted Thomas to expound on Obama after asking him and other panelists for their critiques of Obama's speech last week in Cairo, Egypt. Thomas extolled, "We're understanding what Obama is. He is the great teacher. He is this guy that stands above everybody." He did allow that "there's some condescension" in this attitude. However, the Newsweek editor continued, "But, he stands above everybody and says, 'Now, listen. You people have to stop blaming each other unreasonably. You have to get along here and I am going to show you the way.'"

On May 20, Politico had an interesting little treatment of columnist Charles Krauthammer crowning him as the most important conservative columnist of the day. A brief overview of his life and his emergence as the most reliable voice against Obamaism served as the main subject for the piece, but a few quotes on Mr. Krauthammer made by other columnists added a sense of how respected Krauthammer is to scribe Ben Smith's piece.

As was usually the case during Bill Clinton's presidency, the ascendancy of Dear Leader Barack Obama means that we will often have to consult the output of center-right commentators, and of course the Media Research Center and its affiliates, to cut through the establishment media's puffery to pick up even the most basic pieces of news.

Charles Krauthammer's column today in the Washington Post on the results of Obama's just-completed European Adventure is one such raw news source.

I have bolded items in the excerpt below that represent news that was either not reported or vastly under-reported by what's left of the establishement media (there are even more examples at Krauthammer's full column):

On Monday’s Special Report with Bret Baier on FNC, during the Fox All Stars panel discussion, liberal FNC analyst Kirsten Powers, also a columnist for the New York Post, characterized Barack Obama's recent decision to allow federal funding of embryonic stem cell research as merely a political move designed to please members of his base who blame President Bush for the plight of those who suffer from paralysis or Alzheimer’s, as she also brought up the progress made in stem cell research using adult stem cells. Powers: "He also talks about, you know, putting science before politics, whereas this actually seems to be a very political decision from where I'm sitting. It's something that the base is very excited about."

After noting the advances made in non-embryo destroying adult stem cell research, she continued: "So this is, really, sort of, to me, a political move to satisfy people who really wanted this to happen and blame George Bush, essentially, for people who are paralyzed or suffering from Alzheimer's." 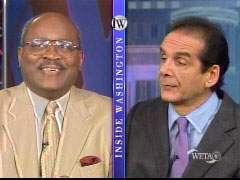 On Inside Washington, a weekly show produced and aired over the weekend by Washington, DC's ABC affiliate, but first broadcast Friday night on the local PBS station, King contended: “This President connects with people.” That prompted fill-in moderator Mark Shields to ask columnist Charles Krauthammer: “Is it Reagan-like in that sense?” Krauthammer cautioned: “Well, except that Reagan, I think, had a lot more substance and he had a lot more ideas-” Cutting Krauthammer off, a chortling King jeered: “More substance than Obama?!”

Krauthammer held firm and then pointed out how Obama's “never managed a candy store, and the way he put together his cabinet shows that he's got a long way to go,” so while “he's very fluid in his speech,” on foreign affairs he's “extremely slow on delivery because he's extremely unsure.” To which King -- the Post's deputy editorial page editor from 2000 to 2007 -- derisively interjected: “He's managed as well as Reagan with Iran-Contra.”

Krauthammer on Iraq: 'Good News Is No News'

In Friday’s Washington Post, columnist Charles Krauthammer lamented how good news in Iraq seems to be no news in Washington, married as the liberal establishment is to a narrative that Iraq was a "fiasco" (courtesy of WaPo’s own Thomas Ricks). The elections weren’t totally ignored, but the anti-Bush narrative is uninterrupted. Krauthammer elaborated on the good news:

Readers are forewarned to remove all food and fluids from their computer's proximity, for this is some truly hilarious stuff:

As we prepare to say goodbye to our 43rd President, an important question needs to be asked: will those suffering from Bush Derangement Syndrome be cured on Inauguration Day?

As most informed people are aware, BDS was first identified by conservative columnist Charles Krauthammer. In his December 5, 2003, Washington Post article, Krauthammer described the malady as "the acute onset of paranoia in otherwise normal people in reaction to the policies, the presidency - nay - the very existence of George W. Bush."

Although Krauthammer addressed others in the grips of this pernicious affliction that "generally struck people with previously compromised intellectual immune systems" such as Barbra Streisand, his real concern was for Democrat presidential candidate Howard Dean:

The roundtable on Monday night's Special Report with Brit Hume on FNC was not kind to the New York Times's hit piece on Sunday's front page that blamed President Bush and only Bush for the mortgage meltdown, ignoring the Democrats in Congress who protected the irresponsible push for more "affordable housing" by Fannie Mae and Freddie Mac (as Times Watch noted yesterday).

Nina Easton, Washington bureau chief of Fortune magazine, pronounced herself "flabbergasted when I read this story, flabbergasted....You cannot write a story about affordable housing policies and blame it on George Bush instead of the Democrats. I mean, it’s just, it’s outrageous."

From the Monday night Special Report with Brit Hume: