It's the contemporary equivalent of "Don't Tread on Me", argues Charles Krauthammer in his Washington Post column today:

Charles Krauthammer on Friday gave a much-needed education to Bloomberg's Margaret Carlson about why the age at which one can receive Social Security benefits must be raised.

Krauthammer: 'Obama Agenda is Dead,' 'He Tried a 2-Year Experiment in Hyper-Liberalism and the Country Has said No'

So what should be made of the historic midterm election of 2010?

While all the pundits try to analyze polling data and read between the lines, syndicated columnist and Fox News contributor Charles Krauthammer has a clearer view. In his view, President Barack Obama’s so-called hope and change agenda is dead and it’s up to Obama to determine his direction.

“Why is it okay for Nina to express opinions, as she has tartly, sharply, unashamedly and openly” while serving as “an honored correspondent” for NPR, while Juan Williams, “because he expresses his opinions, gets canned from NPR?” So Charles Krauthammer demanded while sitting Friday with Totenberg on the same Inside Washington set. “In fact, the standard ought to be lower in the case of Juan because he’s an analyst, whereas Nina is a correspondent.”

Krauthammer had picked up on NPR CEO Vivian Schiller’s contention that the network had canned Williams because he violated the policy that “news analysts may not take personal public positions on controversial issues; doing so undermines their credibility as analysts, and that's what's happened in this situation.”

An uncomfortable Totenberg asserted “it’s a very, very difficult line to draw. And NPR tries to draw it, in my view, using rules that don’t exist anymore.” To which, Krauthammer wondered: “But what’s the difference between you and Juan expressing opinions? You on this show, and him on Fox?” He condemned NPR: “It’s completely illogical and hypocritical.” (Audio: MP3 clip)

Mark Shields on Friday accused the White House of making up the story about the U.S. Chamber of Commerce funneling foreign money into Republican campaigns.

Appearing on PBS's "Inside Washington," Shields said of the issue the Administration and many of their media minions have been harping on for over a week, "It was absolutely fallacious on their part. And they made it up, the White House did" (video follows with transcript and commentary):

It’s quite remarkable to think about and unfortunately it is true.

Throughout the 2009 stimulus debate early in his term, President Barack Obama and other Democrats argue it was time to put America to work with the aid of the government and so-called “shovel-ready jobs.” But in a startling admission in an interview with The New York Times’ White House correspondent Peter Baker, Obama said “there’s no such thing as shovel-ready projects.”

So after the American taxpayers were sold a stimulus bill that was supposed to repair the country’s ailing infrastructure and stem the rise in unemployment, the president’s economic policies haven’t lived up as advertised. On the Oct. 13 broadcast of Fox News Channel’s “Special Report with Bret Baier,” syndicated columnist Charles Krauthammer offered a spot-on explanation.

Albert Einstein said the definition of insanity is doing the same thing over and over again and expecting different results. And so goes the White House with these attacks on the U.S. Chamber of Commerce drummed up by the “professional left’s” blogosphere that it is using foreign donations to finance political advertising.

Syndicated columnist Charles Krauthammer however, had another take on what these attacks are. He said they’re not insane, but desperation of one of the highest degrees. During the Oct. 11 broadcast of Fox News Channel’s “Special Report with Bret Baier,” Krauthammer attacked the Obama administration, calling this campaign against the Chamber “reptilian desperation.”

Video Below the Fold

Krauthammer Smacks Down Inside Washington Panel Over GOP Campaign Contributions

Charles Krauthammer on Friday called the entire panel of PBS's "Inside Washington" a bunch of whiners for complaining about anonymous campaign contributions Republicans are receiving this election cycle.

After host Gordon Peterson briefly explained the impact of the Supreme Court's Citizens United ruling earlier this year, NPR's Nina Totenberg called it a "scandal in the making...this is the kind of thing that led to Watergate."

Peterson then surprisingly asked, "Are you aware of any Democrats turning down soft money like this?"

Totenberg hypocritically answered, "No, but the Democrats aren't getting - it's eight to one is the, is the disproportion here."

Krauthammer marvelously jumped in, "So in other words, it's whining," and that's when the fun started (video follows with partial transcript and commentary):

Columnist Charles Krauthammer scoured congressional Democrats on Friday in The Washington Post for failing to pass any appropriations bills or even introduce a bill extending any of the Bush tax cuts. The title was "The Colbert Democrats." He concluded:

As if this display of unseriousness -- no budget, no appropriations bills, no tax bill -- were not enough, some genius on a House Judiciary subcommittee invites parodist Stephen Colbert to testify as an expert witness on immigration. He then pulls off a nervy mockery of the whole proceedings -- my favorite was his request to have his colonoscopy inserted in the Congressional Record -- while the chairwoman sits there clueless.

A fitting end for the 111th Congress. But not quite. Colbert will return to the scene of the crime on Oct. 30 as the leader of one of two mock rallies on the Mall. Comedian Jon Stewart leads the other. At a time of near-10 percent unemployment, a difficult and draining war abroad, and widespread disgust with government overreach and incompetence, they will light up the TV screens as the hip face of the new liberalism -- just three days before the election.

Krauthammer Takes on Entire 'Inside Washington' Panel -- Again, Over Attacks on Fox News

Think President Barack Obama has thin skin? How could one not, after the attacks on media personalities like Rush Limbaugh or his on-the-record comments about the liberal blogs and Fox News?

On PBS’s Oct. 2 broadcast of “Inside Washington,” NPR’s Nina Totenberg pointed out the left-wing blogosphere has been critical of Obama, yet she chalked it up as just being “whiny.” “Inside Washington” panelist and Fox News contributor Charles Krauthammer responded, and pointed out the president’s “thin skin,” in the wake of his remarks about his cable channel in a recent Rolling Stone interview.

“You would think that the presidency is slightly higher than the left blogosphere, but it is not, and that is what the problems,” Krauthammer said. “The president has an unbelievably thin skin, left or right. His obsession with Fox is a good example of that.” 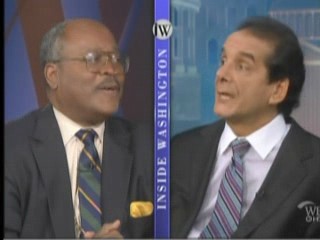 For the second week in a row Charles Krauthammer has gotten into a heated debate with the Washington Post's Colby King on the PBS program "Inside Washington."

This time it was about the effectiveness of President Obama's stimulus plan.

"These guys have had a year and a half and people are not happy with the results," said Krauthammer. "$1 trillion of stimulus it disappeared and there is nothing to show."

King responded, "They had 3 million jobs to show for it."

The fun really started after Krauthammer marvelously replied, "Yeah, saved, saved, how do you measure a saved job?" (video follows with transcript and commentary): 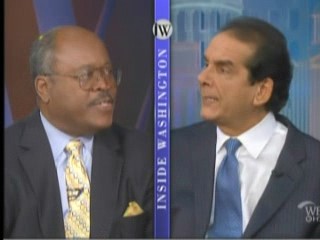 Charles Krauthammer on Friday had a heated debate with the Washington Post's Colby King over what the Tea Party stands for as well as who its leader is.

As the panel on PBS's "Inside Washington" discussed Delaware Republican senatorial nominee Christine O'Donnell's surprising victory Tuesday, the conversation naturally gravitated towards the conservative movement reshaping the face of politics.

"They [the Tea Party] have a litmus test that goes into being right to life, social conservative issues that they're strong on," said King.

Krauthammer pounced, "Look, I hate to say this, but I think that is completely wrong."

The battle was on (video follows with transcript and commentary):