By Mark Finkelstein | June 24, 2009 8:00 AM EDT
When Harry Smith interviewed Pres. Obama earlier this week, I noted that his idea of "speaking truth to power" was to suggest Bo the dog was out of control.
But when Smith had a Republican in his sights this morning, the mild-mannered Early Show host suddenly went Rambo.  Raising his finger, Smith scolded Mitt Romney for pointing out that Pres. Obama's response to the Iranian repression fell far short of Ronald Reagan's "tear down this wall" reproach to the Soviets. In the second half of his op-ed in the Washington Post today, former Soviet Premier Mikhail Gorbachev entirely credits himself and fellow countrymen for the end of his country's Communist dictatorship, and claims that it's the Western capitalist model that is currently failing.

In the process, he espouses positions that seem to have been copied from the Democratic Party's past few platforms, as well as from U.S. Dear Leader Barack Obama's governing model.

Following Gobachev's ridiculous rewrite of the Soviet Union's final decade (you know it's ridiculous because the name "Reagan" never appears; he doesn't even believe that the break-up should have happened), here are key passages from the former dictator's admonishments of the West (the most obvious direct lifts from Obama and Dems are in bold):

Here’s a quick informal poll:  Who has heard news of ’s recent troop buildup in the South Ossetia region of ?

Most of our readers would immediately think of the Russian invasion of that region last summer, during the presidential contest, but the Russians are arguably saber rattling again with a fresh buildup of boots on-the-ground ahead of planned NATO exercises.

Last August, the media coverage immediately took the angle of breathless anticipation on how each presidential candidate would react to such a situation.  John McCain’s position was easily established from his record over many years in the Senate.  Then-Senator Obama’s position was much more difficult to ascertain – but the media gave him ample time to figure it out, helping the candidate defer those questions to the September 26 debate.  In fact, a good example of such activism was shown in the Washington Post’s Jim Hoagland, who in his August 31 op-ed insisted:

As was usually the case during Bill Clinton's presidency, the ascendancy of Dear Leader Barack Obama means that we will often have to consult the output of center-right commentators, and of course the Media Research Center and its affiliates, to cut through the establishment media's puffery to pick up even the most basic pieces of news.

Charles Krauthammer's column today in the Washington Post on the results of Obama's just-completed European Adventure is one such raw news source.

I have bolded items in the excerpt below that represent news that was either not reported or vastly under-reported by what's left of the establishement media (there are even more examples at Krauthammer's full column):

On top of the major faux pas in gifting promulgated by the Obamas during the visit of British Prime Minister Gordon Brown comes the story of the ridiculous mistake that Secretary of State Hillary "the linguist" Clinton made with her gift to Russian Foreign Minister, Sergei Lavrov.

The "gift" was supposed to be a funny one, but it was a misfire because it seems that Clinton couldn't find anyone in the employ of the State Department that had a grasp of the Russian language. The U.S. media has not made too big a deal about this one but the Russian and British media has been playing this one to the hilt. It's being called the "Button Gaffe" and it certainly is making our Sec. of State look stupid to the world.

As part of a continuation of his "COMЯADE UPDATE" segment he started near the beginning of his show, which became a YouTube sensation, Fox News host Glenn Beck is picking up right where he left off.

"Comrades! Comrades, there is good news from the Western front," Beck said. "Our glorious revolution is starting to take hold on a global scale. Just listen as Comrade Brown pounded our propaganda into the minds of the clueless capitalist pigs today. Listen up."

Beck played a clip from Brown's address of a joint session of Congress, where the prime minister lobbied for the "world" to work together. 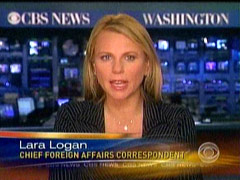 On Tuesday’s CBS Evening News, correspondent Lara Logan reported on the Obama administration’s effort to improve relations between the United States and Russia by abandoning a missile defense system proposed under the Bush administration: "It's become one of the most contentious issues dividing the U.S. and Russia. American plans to deploy a missile defense system on Russia's doorstep...The Obama administration's willingness to even open discussions on the issue is a dramatic reversal of U.S. policy under President Bush, who dismissed Russian objections. That dispute helped bring U.S.-Russian relations to their lowest point since the break-up of the Soviet Union nearly 20 years ago. Today the President made it clear he's already started to change that."

Rather than offer any criticism, Logan cited Steven Pifer of the left-leaning Brookings Institution, who declared: "It seems to me that when we're looking for issues on which we can signal to the Russians that we're prepared to be more flexible and listen to some of their concerns, missile defense is one." At the top of the broadcast, anchor Katie Couric teased the segment by describing Obama’s proposal as an "intriguing suggestion."

It's not often that meteorology intersects with geopolitics - but Europe could be in store for another Cold War, literally.

Accuweather.com's chief long-range and hurricane forecaster Joe Bastardi observed that Russian Prime Minister Vladimir Putin's recent cut of gas flows to Europe via Ukraine may have been done so in anticipation of a global cooling cycle on the Jan. 6 "Glenn Beck Show" radio program. Bastardi has a solid reputation among Wall Street traders for understanding weather's impact on energy commodities.

"The thing I want to bring up here - very interesting - most of the solar cycle studies that we know about and that guys like me read have come out of the Russian scientists," Bastardi said. "But when Glasnost developed, the Russian scientists, a lot of their ideas on the coming cool period that a lot of us believe is going to occur - ice, rather than fire is the big problem down the road here 2030, 2040, and the reversing cyclical cycles of the ocean - it came out of the East." 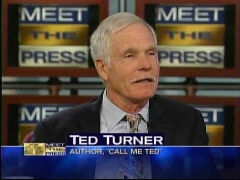 “The KGB, I think, was an honorable place to work” with “worthwhile” achievements, CNN founder Ted Turner contended in an interview aired on Sunday's Meet the Press in which he blamed the U.S. for starting the battles with Vladimir Putin “by putting the Star Wars system in Czechoslovakia and Poland” and, when host Tom Brokaw recalled that Leonid Brezhnev reacted to Jimmy Carter's outreach by invading Afghanistan, Turner retorted with moral equivalence: “Well, we invaded Afghanistan, too, and it's a lot further -- at least it's on the border of the Soviet Union.” Brokaw called it “naked aggression on the part of the Russians at the time,” prompting Turner to charge: “Well, going into Iraq was naked aggression on the part of the United States.”

Turner, who did the sit-down as part of the media tour for his new book, Call Me Ted, defended Putin's KGB background by comparing it to someone who worked for the FBI:

On Anniversary of Berlin Wall's Fall, Expat Pub Ignores Causes, and What Led to Its Original Construction

Expatica is an overseas publication for US expatriates in Europe with six country-customized editions. It betrays many of the biases that permeate mainstream US journalism. What follows is a prime example of that.

The publication's Germany version today has an article celebrating the 19th anniversary of the fall of the Berlin Wall that makes it appear as if it, well, y'know, sorta just serendipitously happened because a bunch of people protested for a while.

Here are the key paragraphs (bolds are mine):

Michelle Malkin is reporting, based on e-mails from several readers, that MSNBC's Keith Olbermann is at it again.

In April 2007, when asked if he would be apolitical during these broadcasts, Olbermann told Sports Illustrated's Richard Dietsch the following (HT Inside Cable News; bold is mine):

"Am I going to launch a political diatribe in the middle of sportscast? That sounds like bad programming. You will see exactly as much pure politics in Football Night in America as you did last year."

..... "I’m certainly not going to go and take advantage of a situation in which someone has said to me, 'Hey, we know what your doing. We have no fear of trusting you on this.'"

Tonight, his reaction to a serious injury to Buffalo Bills quarterback Trent Edwards was not exactly apolitical, as relayed by one of Malkin's e-mailers:

On Monday's Countdown show, MSNBC's Keith Olbermann charged that the Republican Party, which he referred to as the "Grand Old Terrorism Party," is engaging in "terrorism" against Americans by distributing DVD copies of an anti-terrorism film, which Olbermann referred to as "neocon pornography." The film in question, "Obsession: Radical Islam's War Against the West," analyzes the threat of radical Islam and shines a light on the antisemitic, anti-West propaganda that many children are subjected to in some schools in predominantly Muslim countries, and the media that are tolerant of this kind of radical message in these countries. Even though the film opens with an on-screen disclaimer emphasizing that "most Muslims are peaceful and do not support terror," and that "this is not a film about them," Olbermann portrayed the film as a "hate DVD." Olbermann: "[Republicans] are polluting the nation with more neocon pornography today. ... The disk is of a lunatic fringe, right-wing film ... In it, scenes of Muslim children are intercut with Nazi rallies. The organization behind the hate DVD has endorsed Senator McCain."

Notably, just a month ago, Olbermann accused "neocons" of engaging in a conspiracy to ignite a new Cold War with Russia, as he theorized that they "may think terrorism is dead, at least as far as its usefulness as a weapon to frighten Americans, and they've decided to foment the return of an oldie but a goodie, that threat from those godless commu-, I'm sorry, that threat from those czarist Russians."