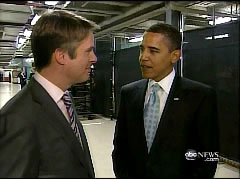 Is Twitter a place where journalists betray their biases? Yes, in the case of ABC Nightline anchor Terry Moran. If you like the "feeling of hope," then you favor Obama's prize.

Today: "Obama's Nobel is an award to a feeling more than any deed:the feeling of hope.Justified?Depends on what you think of the Nobel--and of hope."

Last week, after the Chicago Olympic fiasco: "Today this Chicago-born die-hard is crestfallen. I know--lots of people are happy: Obama-haters, fiscal cons, etc. But not me. I need a pop."

Moran doesn’t "tweet" multiple times a day – unlike ABC’s Jake Tapper (who joked on Twitter today about Arizona State refusing an honorary degree: "apparently the standards are more exacting for an ASU honorary degree these days.") But Moran did get repeatedly exercised over Rep. Joe Wilson’s yelling at Obama:

The Associated Press took to the streets of Washington, D.C. and Chicago this morning for reaction from everyday citizens about President Obama's Nobel Prize win. All but one of the featured interviewees expressed at least some skepticism about the president's worthiness to receive the award. And no, it seems none of these men (and woman) on the street are rabid right-wingers.

You can see the embedded YouTube video below the page break: 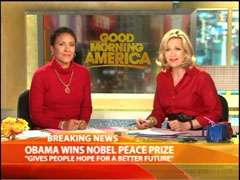 Good Morning America co-host Diane Sawyer on Friday used an odd expression to fawn over Barack Obama’s Nobel Prize win. She cooed that the award is "the Olympic gold of international diplomacy." (Was this Sawyer’s way of saying the prize makes up for the Chicago Olympic failure?)

In a follow-up segment, former top Democratic aide turned journalist George Stephanopoulos touted what an enormous impact the Nobel Prize would have: "But on a serious note, White House aides do believe this will strengthen the President's hand, both at home and abroad." He explained how these "White House aides" (Rahm Emanuel, perhaps?) told him that "this will really strengthen the President's hand as they try to force inspectors in to the Iranian nuclear sites."

Sawyer should be credited for at least asking the obvious question. Talking to Geir Lundeestad, the director of the Nobel Institute, she quizzed, "Here’s the first question: Nine months into a presidency. Isn’t that a little fast?" Reporter Yunji De Nies mildly observed, "But with critics arguing that Mr. Obama's accomplishments have yet to rival those of previous winners, the chairman of the committee found himself on the defensive."

DNC: GOP Has Thrown In With 'Terrorists -- Taliban and Hamas' in Opposing Obama's Nobel (Updated)

NBC's Lauer: Not to Be Rude, But Obama Hasn't Done Anything 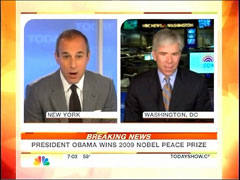 Even Barack Obama’s fan club on NBC’s Today were stunned at the President’s winning of the Nobel Peace Prize. Co-host Matt Lauer found it baffling: “We’re less than a year into the first term of this president and there are no -- I'm not trying to be, you know, rude here -- no major foreign policy achievements, to date.”

Meet the Press moderator David Gregory felt the need to point out the “left-leaning” impulse of the Europeans who christened Obama as the world’s leading peacemaker for 2009: “This is a lot more about tone than it is substantive accomplishment. In many ways, this is a European body who is more left-leaning, certainly, and opposed to the administration of George W. Bush.”

Lauer followed up: “So, what you're saying in some ways and, again, not to be rude here or sarcastic, that in some ways he wins this award for not being George W. Bush?”

Scarborough and Time's Mark Halperin—whom no one would accuse of being a right-wing hack—had some good-natured fun with the Nobel news. A laughing-out-loud Scarborough suggested among other things that Marisa Tomei was more deserving of her Academy Award. But the Messiah will not be mocked, and it wasn't long before NBC's Savannah Guthrie, on the set, announced that she had received an email from "a senior White House official" telling Joe to "stop being an a------e" [spelled out in the original, according to Savannah]. Mika Brzezinski tried to soft-pedal the insult, claiming the White House was "joking." Real side-splitter! Is this the new standard of civility from Dems so offended by "you lie"?

No Peace Prize is likely to be awarded to Scarborough or Rush Limbaugh anytime soon. War has broken out between the two. Scarborough initiated hostilities by criticizing Rush for reveling in PBO's Olympic failure. Rush returned fire yesterday, calling Scarborough a "neutered, chickified moderate." This morning, Scarborough repeatedly claimed that W had Rush's "testicles in a blind trust" for eight years. Joe asserted that he had early and often warned Republicans against profligate spending during the Bush years, while others stood by in support of the president.