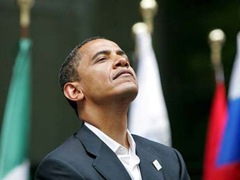 There is one thing I very much want everyone who reads this to understand. Although I vehemently disagree with just about everything Barack Obama has done since he has been in office, and I really believe that he's digging a fiscal hole that this nation will be generations, if ever, digging out of, although I believe him to be a total socialist and just hate it when I have seen him bow to royalty around the world, I will write this piece with as much impartiality as I can, so that it will not be about the man or anything he has done in the past, but rather about the defense of this nation.

First of all, trying terrorists in America is nothing more than gross arrogance by our President and Attorney General.

The repercussions of a terrorist trial in New York could be so catastrophic that you don't even want to think about it.

The people we are dealing with have no conscience at all. To see what kind of people they are, just look back a few years ago at what happened in Russia when the Russian government was holding Chechen terrorists in prison.

Other Chechen terrorists took over a school and held the children hostages trying to obtain the release of terrorists that the government was holding. They chose a middle school and not by accident. It was because the boys were big enough to do physical labor and the girls were old enough to rape.

They forced the boys to help barricade the building stacking furniture against the walls and raped the girls and women teachers and then proceeded to murder them.

These are the kind of people we are dealing with, and Obama wants to bring this clear and present danger into New York City.

If there is a gonad left in congress they will put a stop to this, Democrat, Republican, whatever and especially the Congressmen and Senators from New York should be fighting tooth and nail to put an end to this travesty and they have the power to do it, by law.

If they don't, they share the blame with whatever happens.

Secondly, the President's speech Tuesday night was an exercise in futility.

He might as well have gone ahead and told the world that he was not committed to winning the war in Afghanistan, that he had no resolve and that he was sending three quarters of the troops General McChrystal asked for, he was going to remove them after eighteen months and that was that.

This has been the problem with every president we've had in the last half-century with the exception of Ronald Reagan, there is no commitment to winning the war. They use words like "containment" and "exit strategy."

If we don't intend to fully winning a war, we should never send one soldier anywhere. Our enemies know that Obama has no designs on winning in Afghanistan. He's just playing politics; playing both sides against the middle.

Why even send the troops?

I say, Mr. President, why don't you just bring them all home starting today? Because all al-Qaeda and the Taliban are going to do is wait you out and after the troops leave they'll move right back in and take over, so why risk even one more American life.

And while we're at it, why don't you just bring all of our troops home from all over the world? You're not going to let them win, so why put them in harm's way?

The men and women who lay their lives on the line every day deserve respect, and what do they get?

Three Navy Seals are being put on trial for punching a murdering S.O.B. in the gut.

We have a President who has surrounded himself with arrogant snobs who know as much about fighting a war as a hog knows about an airplane, an Attorney General who treats the terrorist scum they've risked their lives to capture like citizens of this country. As Commander in Chief, he seems more interested in trying to avoid hurting some Muslim's feelings than he is in supporting the efforts of those he is commanding.

To say this President is in way over his head is a gross understatement and Tuesday night let the rest of the world know it.

Pray for our troops, and for our country