'Early Show' Anchor Much Tougher on Gun Supporter Than Opponent 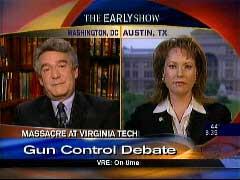 On the last half hour of Tuesday's Early Show, guest co-host Maggie Rodriguez moderated a debate on gun control between gun control advocate Paul Helmke and gun rights advocate Suzanna Hupp. Rodriguez threw softballs to Helmke. For example, if tragedies such as the Virginia Tech shooting "are happening because there are too many guns in the United States?"and very bland questions like "what do you think about that?" 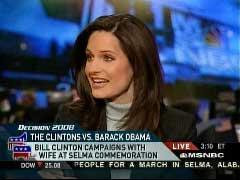 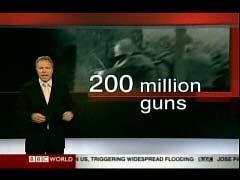 It didn’t take the BBC World, airing on PBS, long to find a way to criticize America and our constitution it the midst of our national tragedy. After an initial segment on the events at Virginia Tech, the BBC felt another story on Second Amendment rights were appropriate for a broadcast. The story by Gavin Hewitt led with the following, "Today’s images from Blacksburg are at once horrific but shockingly familiar.

Like the rest of the nation, we at the Asian American Journalists Association (AAJA) are stunned at the news of today's shooting at Virginia Tech. Our thoughts are with the victims and their families and friends as they cope with this horrific incident.

A day after posting a blog entry replete with falsehoods, and despite more than dozens of comments pointing out the factual inaccuracies of the story, Brian Ross and Dana Hughes of the ABC News blog "The Blotter" have yet to issue a retraction.

Does ABC News have an obligation to report facts, or is peddling a political agenda buttressed by lies their preferred stock in trade?

Before this is over, I predict that Virginia Tech President Charles Steger will apologize for errors that he and his administration made in dealing with yesterday's massacre. But as of this morning, Steger was still seeking to defend the failure to alert students for two hours after the initial murders. As Matt Lauer politely pointed out, his explanation would seem to fail a simple test of logic.

The easiest place to find liberal disgust at American gun laws in Tuesday's Washington Post was in Kevin Sullivan's roundup of international reaction from London. The headline was "Shock, Sympathy, And Denunciation Of U.S. Gun Laws: British Newspaper Asks, 'What Price the Right to Bear Arms?'"

One British expert even claimed you could easily buy automatic weapons along with your yogurt and bologna at the supermarket:

I'm struck by how political Web sites are choosing to address the shooting deaths at Virginia Tech, if at all, and the reaction the same is generating among at least one prominent conservative blogger.

What happened at Virginia Tech today is not a "tragedy" in the way that tragedy is usually defined as being a sudden accident. No, it was a cold-blooded crime. But, the criminal action at Virginia Tech had barely finished before news sources began their meme against guns, those "permissive laws" controlling them and the "easy access" to them. 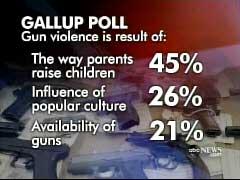 Monday afternoon ABCNews.com was quick to put up a speculative posting, without any real knowledge of what the shooter used, headlined, “Lapse of Federal Law Allows Sale of Large Ammo Clips” (NewsBusters item), and a bit later ABCNews.com posted an interactive poll with a very leading question: “Do you think this incident is a reason to pass stricter gun control legislation?” But in a World News

In a 2:30 p.m. posting, well before details about the weapons used in the tragic Virginia Tech shootings were available, ABC News's Brian Ross devoted a "Blotter" blog entry to a gun control advocate's talking points. Ross didn't make room for any gun rights advocates or find a critic to suggest the Brady Center was callously capitalizing on a tragedy to further its political agenda. Here's the entire blog post:

Web sites now advertise overnight UPS delivery of the clips, which carry up to 40 rounds for both semi-automatic rifles, including 9mm pistols, and handguns.

"High capacity magazines read extreme firepower and gusto. Stock Up!" is the headline of one of many gun shop Web sites.

Virginia law enforcement officials have not identified the weapon used in the shootings today at Virginia Tech, but gun experts say the number of shots fired indicate, at the very least, that the gunman had large quantities of ammunition.

"When you have a weapon that can shoot off 20, 30 rounds very quickly, you're going to have a lot more injuries," said Peter Hamm of the Brady Campaign to Prevent Gun Violence.

That item is the only "Blotter" entry about the Virginia Tech shootings so far today. Hamm's group, the Brady Center to Prevent Gun Violence, issued a press statement on the site's home page that peddles its talking points. It also has a brand new petition page up at the site set up to sign up readers for e-mail updates. Curiously enough, "journalist" is one of the selections a petitioner can check off when describing him or herself on the form:

Update at bottom of page.

Harvard researcher Matthew Miller released a study on April 10 that ties higher suicide rates with higher rates of firearm ownership. Six days later the Washington Post's Shankar Vedantam printed a five-paragraph brief in the paper's "Science Notebook" that cribbed heavily from the Harvard School of Public Health press release. Yet nowhere in his story was the fact that a liberal anti-gun think tank gave $700,000 to finance the School's research.

No gun rights advocates or independent statisticians were quoted to critique the study's methodology or to question the political motivations that may have guided the study, although Vedantam had five days to round up critics of the study.

Another glaring omission in Vedantam's April 16 story: he failed to inform readers that the Harvard study was financed by the liberal Joyce Foundation.

A review of the Joyce Foundation's Web site makes clear it has an activist anti-gun ownership agenda.

For one thing, the foundation only gives grant monies to organizations it feels will help advance its liberal, anti-gun agenda. According to a "Common Question" page in its "gun violence" section: