CBS: Bill O’Reilly, ‘Looking for Love in All the Wrong Places’

In a rather odd teaser for an upcoming Bill O’Reilly interview with co-host Hannah Storm on Wednesday’s CBS "Early Show," co-host Harry Smith remarked, "And looking for love in all the wrong places. Here's Bill O'Reilly in the studio this morning." What? Who’s "love" is O’Reilly looking for and why is the "Early Show" the "wrong" place to find it? Smith certainly made no such comment when he welcomed the ultra left-wing Dennis Kucinich earlier on the program.

For his part, O’Reilly had some odd responses when Storm asked about Hillary Clinton’s latest debate performance and charges of sexism against other Democratic candidates, "What do you make of Bill Clinton criticizing Hillary Clinton's Democratic rivals, saying that they were swift-boating her?" O’Reilly responded, "You see, I don't believe anything the press writes about Bill and Hillary Clinton at all...We tracked it yesterday, and we couldn't find any swift boat reference."

Obama, goner? Joe Scarborough seems to think so. Here's what the MSNBC host had to say on today's "Morning Joe":

JOE SCARBOROUGH: Yesterday, way too late in the afternoon, I did an hour on "Super Tuesday" [MSNBC's weekly Election 2008 special] and was interviewing A.B. Stoddard, journalist of "The Hill," and I asked her about Barack Obama, was he going to step forward? And she gave a great answer, and she said what a lot of people are not saying right now, she said, "you know what, Joe? He just doesn't have it in him."

'Fox and Friends' Picks Up on Matthews's Obama Speech 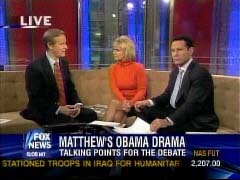 NewsBusters reported on October 29 that Chris Matthews wrote a speech for Barack Obama attacking his primary rival Hillary Clinton from the left. The following morning, "Fox and Friends" picked it up.

On Friday’s "Early Show," co-host Julie Chen and reporter Chip Reid analyzed the Values Voters Conference in Washington this weekend and how conservative Evangelicals "are deeply frustrated because they can't find a Republican candidate they can coalesce around," according to Reid. He went on to exclaim that "There's one Republican candidate, though, who really has some Evangelicals dispirited. Rudy Giuliani, because of his support for abortion rights."

In order to emphasize the dire circumstances of the Republican Party, Reid continued by discussing how a third party candidate backed by the religious right could, "... allow Clinton to cruise to victory..." and that "Many Evangelicals say forming a third party to oppose Giuliani is a prescription for Republican disaster."

On Tuesday’s CBS "Early Show," host Hannah Storm exclaimed that Fred Thompson "has received a lot of criticism...for being underwhelming so far out on the campaign trail." This just hours before Thompson’s participation in his first GOP debate.

The segment began with a report by Nancy Cordes who observed that Thompson’s "...been trying to keep expectations low."Storm then invited on guests Arianna Huffington and Michael Smerconish for political analysis, both of whom bashed Thompson. Smerconish began the attack:

Well, unfortunately, I think the delivery probably matters over substance in this case because he is getting a reputation on the stump so far as being a bit of a dolt. Somebody needs to light a fire under his fanny.

Huffington brought her ususal class to the argument:

And then there are all these stumbles, you know, on the issues too. It wasn't just a matter of being underwhelming in terms of passion and energy...You know, he didn't know much about the Everglades in Florida...he didn't know much about Terri Schiavo. And he thought Hezbollah was in Afghanistan. You know, these are kind of major problems, especially after all these years with George W. Bush. People want a little more competence in the sense of the grasp of the issues. 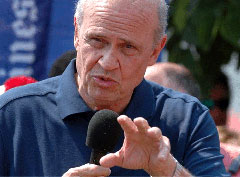 Was Fox News simply offering solid reporting on the inside baseball of the Fred Thompson campaign, or could there have been an element of payback for the candidate having blown off the Fox-sponsored debate last night in favor of appearing on NBC's "Tonight Show"?