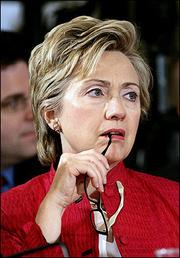 Be it her politics - or perhaps her personality - one thing is clear: some big-time MSM women columnists don't dig Hillary. Yesterday I described here how the LA Times Rosa Brooks described Hillary - in the context of her support for legislation authorizing torture in ticking-bomb type cases - as having "hit bottom" and "fallen as low as it's possible to go."

Obama: Iran, Syria Should 'Take Ownership for Stability' of Iraq

I DVD'ed Olbermann overnight to check just how fawning a performance he would put in with his guest Barack Obama - whom FCC regulations require me to describe as "the rising star of the Democratic party." When it came to Olbermann's sycophancy, I wasn't disappointed. After accusing Republicans of "terrorizing" Americans, the MSNBC host continued:

The NewsBusters Weekly Recap: October 14 to 20

The midterm elections are approaching and some members of the media are revving up their bias. MSNBC’s Keith Olbermann recently suggested that President Bush might be as big a threat as the terrorists. This was only a day after referring to conservative talk show hosts who visited the White House as the "Legion of Doom." CNN’s Jack Cafferty wondered if Karl Rove is planning an "October surprise" to salvage the Republicans’ chances in the midterm elections.

The print media have also offered unrestrained attacks from the left. A "Washington Post" report described House Speaker Dennis Hastert appearance as "a cross between Wildford Brimley and Jabba the Hutt." Nothing quite like objectivity, huh? A former "New York Times" bureau chief recently characterized the Christian right as "fascist." Perhaps he’d been chatting with "Newsweek" columnist Jonathan Alter. Alter told Don Imus he hoped the country has seen the last of "values voters."

The "Today" show fawned over Barack Obama, describing him as "electrifying" and a "rock star." This was on the same day that they giddily predicted a "perfect storm" to wipe out the Republicans in the midterms. Another early AM program, CNN’s "American Morning"encouraged author David Kuo to call for Christians to boycott the upcoming election. 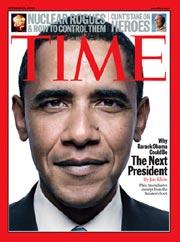 This week’s cover story on "Why Barack Obama Could Be The Next President" is really part of an enormous package offering hope to liberals about defeating the conservative movement, especially the religious right.

One day after getting the celebrity treatment on "Today," Senator Barack Obama stopped by CNN’s "American Morning" to receive fawning questions from Soledad O’Brien. The big difference in the coverage is that while NBC's Meredith Vieira referred to Obama as a "rock star," O’Brien only mentioned that "some people say he is the brightest star in the Democratic Party." Isn’t it great when one media outlet differentiates itself from another? The morning host, who only mentioned Iraq and North Korea in passing, found time for particularly tough questions, including this hardball: "What’s your biggest fear?" Most of the anchor’s queries were of the short variety:

O’Brien: "I think, we see partisanship that you see. And sort of, as you mentioned, in D.C. that you don't necessarily see in the American people. So why don't politicians get that?"

ABC's Tapper Scrutinizes GOP Scandals, But How About Harry?

Who is Jake Tapper? He was the chief political correspondent for the lefty Salon.com. His book about the 2000 campaign, Down and Dirty: The Plot to Steal the Presidency, was so biased against Bush that even fellow liberal Jonathan Alter panned it.

Tapper now patrols the political beat for ABC. But his lopsided report on congressional scandals on this morning's GMA reveals that he has lost none of his partisan edge. While Washington University prof Steven Smith was shown stating that 20 members of Congress are currently caught up in sex or money scandals, Tapper focused on seven: six Republicans and only one Democrat.

In Tapper's Republican Hall of Shame were:

Hitting Hillary Over Torture, Will Brooks Bash Bill Too?

Despite the harsh headline: Hillary Hits Bottom, Hillary Clinton might actually welcome Rosa Brooks' LA Times column of this morning condemning her for supporting legislation allowing torture in ticking-bomb cases.  Call it a 'Sistah Rosa' moment that Hillary can point to as proof she's not too soft on terror to be president.

'Klan' You Get It? NY Times Accuses GOP of 'Torchlight' Tactics 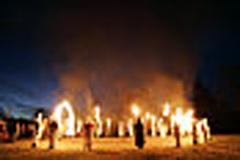 It wouldn't be election season without at least one member of the MSM associating Republicans with the Ku Klux Klan. And who better to oblige than the New York Times, in its editorial of this morning It’s Voter-Fooling Time in America. The Times presents its piece as a non-partisan hand-wringer over dirty or deceptive campaign tactics in the last weeks before Election Day.

Wednesday’s Washington Post drew an uproar in rural Virginia when the Style section made unfunny jokes about rural Virginia being a place of drug labs, Cracker Barrel, the NRA, and "freshly killed venison," while Northern Virginia liked urbane things, like "Alfred, Lord Tennyson." Libby Copeland’s syrupy tribute to James Webb in that section Wednesday presented him as a wond

Author David Kuo on 'Colbert Report;' Not So Conservative

Just who is David Kuo? For starters, he used to be the Deputy Director of the Office of Faith Based and Community Initiatives. Additionally, he has now written a book claiming the Bush White House is selling out evangelical Christians. But is he as conservative as the media would have Americans believe? The author appeared on the October 18 edition of "The Colbert Report" and seemed to fit right in with "pretend right-winger" Stephen Colbert:

Kuo: "Because it gives the impression that Jesus endorses a particular political agenda, you know, that Jesus is somehow, you know, pro-life, anti-homosexual, pro-Iraq war and pro-estate tax. You know, when Jesus actually wasn't about those things. You know, It's the good news. Jesus was raised from the dead. Jesus comes to give life, give it in full. That's Jesus. One is politics. A big difference."

Viewers of Thursday’s edition of ‘The View’ were granted another glimpse into the liberal world view of co-host Rosie O’Donnell. Today, O’Donnell recounted her teary phone conversation with former President Bill Clinton, in which he apologized for the Monica Lewinsky affair. Later in the program, during an interview with Elizabeth Edwards, wife of former vice-presidential candidate John Edwards, O’Donnell slammed John Kerry, the Democratic nominee for President, for conceding the 2004 election before all the votes were counted and accused the Republicans of "cheating" by tinkering with the voting machines.

During the "Hot Topics" segment of the show, the ‘View’ women were discussing congressional sex scandals, which led Rosie to recount her phone call with the former president:

O’Donnell: "And I said to him, you know, to tell you the truth, sir, you broke my heart. I said, you know, I loved you like my mom loved Kennedy and, you know, I had faith in you, one of the few men I had real faith and hope in."

Rosie’s full tale of her presidential phone call behind the cut: 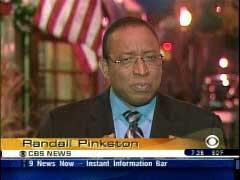 Republican Congressman James Saxton is not exactly an endangered incumbent, as CQ and C-SPAN rate him as safe. But, you wouldn’t know that from watching Thursday’s "Early Show" on CBS.