Here’s something you don’t see every day: three media members – two from liberal press outlets – agreeing that Fox News actually did something right.

Yet, that’s what happened on CNN’s “Reliable Sources” Sunday, as host Howard Kurtz and his guests discussed the Republican debates aired Tuesday.

Let’s face it, a lot of people expected Fox to go easy on the Republicans. Did that happen?

National Review’s David Frum was first up, and, not so surprisingly, raved:

If you believe the hype from the open-borders crowd about how illegal immigrants "are doing jobs other won't do," you would have to wonder how this ever happened (the following is from a May 11 company press release):

Swift & Company today reported its return to standard staffing levels at all four domestic beef processing facilities after the detention and removal, on December 12, 2006, of approximately 950 Swift Beef employees by the U.S. Department of Homeland Security's Immigration and Customs Enforcement ("ICE") division.

A terse Associated Press story on the announcement that gained very little circulation made sure to remind us that "Operations at Swift plants in Colorado, Minnesota, Iowa, Nebraska, Texas and Hyrum, Utah, were suspended for several hours on Dec. 12 while immigration agents arrested 1,217 workers. No company managers have been charged."

Somehow, AP "forgot" to tell us that, as reported by the Greeley, Colorado Tribune the previous week (requires free registration), that at just one of the facilities involved:

Canadian Front Page: ‘Experts Say Many of the Claims in Al Gore’s Film Are Wrong’ 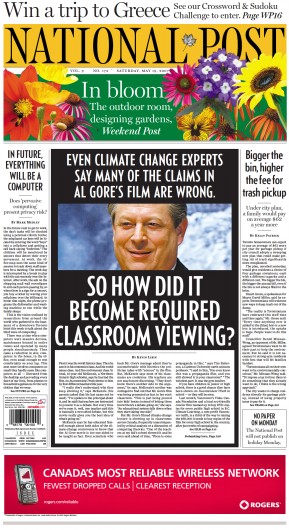 Here’s something that is almost a metaphysical certitude: no major American newspaper, in the midst of all the current global warming hysteria, would dare do a front-page feature article questioning the merits of Al Gore’s schlockumentary “An Inconvenient Truth.”

Yet, there it was Saturday, covering almost two-thirds of the front page of Canada’s National Post, right smack in the middle, with a big picture of the Global Warmingist-in-Chief, surrounded by the shocking headline:

Even Climate Change Experts Say Many of the Claims in Al Gore’s Film Are Wrong.

So How Did it Become Required Classroom Viewing?

Think you’ll see that some day on the front page of the New York Times, Washington Post, or USA Today?

While you ponder, the article was just as skeptical (emphasis added throughout):

Kimberley Strassel's OpinionJournal.com column about coal-mine operator Robert E. Murray of Murray Energy is important on a number of levels.

You haven't heard of Robert E. Murray? That's not surprising.

On the CBS News website Public Eye, newly minted CBS man Jeff Greenfield saw no danger that the 2008 campaign will be drenched with a liberal bias, even though he admits that "most members of the so-called mainstream media, undoubtedly, in the voting booth, vote Democratic." He pulls out a familiar argument: when liberal losers lose, it’s easy to argue that they weren’t beneficiaries of liberal media bias: "But in my view the danger of bias does not lie in political coverage.

By Ken Shepherd | May 20, 2007 3:36 AM EDT
Politico's Mike Allen gave readers a peek at excerpts of "The Reagan Diaries," set to hit bookstore shelves on Tuesday, May 22.

Well before the Media Research Center was conceived in 1987, the Gipper was watching the media's liberal biases and recording his "frustration with the press," Allen noted:

The Fairness Doctrine, the law that effectively put the kibosh on political talk radio for a number of years, might be coming back if congressional Democrats have their way. According to Fred Thompson, this turn of events was prompted in part by the failure of Air America radio:

The real issue here is not what you “can” see or hear — which is what the Fairness Doctrine was about originally. It’s what you’re “choosing” to see or hear. 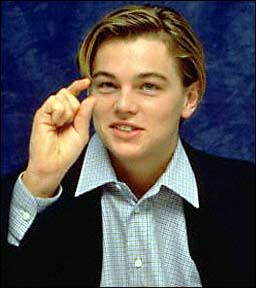 Honestly, the arrogance of some Hollywood liberals knows no bounds. As they live in their million dollar mansions, and jet-set around the world in a manner that 99.99 percent of the population can’t fathom, these folks have the gall to tell others how they should alter their lives for the benefit of the planet.

The most recent example is Leonardo DiCaprio, the 32-year-old actor that has absolutely no formal training in geology, climatology, meteorology, or anything in any way related to complex earth sciences.

In fact, in the picture to the right, DiCaprio could easily be answering a question about just how much education he has in these or related subjects, as according to Wikipedia, Leo never attended college.

Yet, he has the unmitigated audacity to claim in his new film that if we don’t listen to him and other scientifically uneducated folks like soon-to-be-Dr. Al Gore, we’re all going to die.

As reported by The London Paper (emphasis added throughout):

Conservative radio talk show host Rush Limbaugh reported on air and at his website Friday that NBC’s “Today” show is going to do a segment Monday regarding his musical parody “Barack the ‘Magic Negro’” (audio available here, subscription required):

Now, this first aired on March 21st. This is May 18th. By the time they get around to doing their profile, it will be two months old as a story.

Interesting point. After all, Obama himself shrugged this whole thing off as just "entertainment" weeks ago.

If you believe what you see from our news media, everybody in the Middle East with the exception of Israelis wants American military forces out of Iraq as soon as possible, and thinks suicide bombers are martyrs to be revered.

Well, meet Abd Al-Hamid Al-Ansari, the former dean of Islamic Law at Qatar University. He was interviewed by Al-Arabiya TV on May 11 during which he made some statements that folks in our media wouldn’t want you to hear (video available here courtesy of MemriTV).

There was a summit between Russia’s Vladimir Putin and the leaders of the European Union on Friday that yielded as little results as it did attention from America’s media.

One of the issues on the table was whether Russia is going to provide more energy resources to EU nations starved for such.

Didn’t hear about this?

Well, that’s not surprising, for in the midst of the media’s ongoing attempts to create global warming hysteria while pushing the U.S. to participate in the Kyoto Protocol, our press have little interest in reporting how energy politics across the Atlantic and Pacific oceans are threatening economies around the globe.

Hip Hop Hillary? WashPost Says Bill And Hill Can Be Like Beyonce and Jay-Z

After all, it’s one thing when sycophants like Sheryl Crow, Laurie David, and Leonardo DiCaprio gush over the former vice president in a manner akin to teenyboppers within earshot of Sean or David Cassidy.

But when such fawning superlatives like “prophetic status” and “intellectual mastery” are employed by a big-time journalist such as James Traub to describe a politician, uncoordinated peristalsis in one’s bowels could cause an embarrassing event without warning.

As such, the reader is cautioned to peruse the following quotes from this disgraceful article with as empty a stomach as humanly possible (emphasis added throughout): 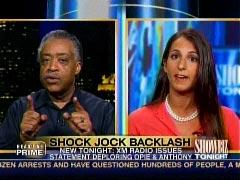 Brent Bozell's culture column this week deals with Opie & Anthony's sick XM shock-jock routine about raping Condoleezza Rice (and raping Laura Bush "to death.") You may not be shocked, but Al Sharpton made no attempt to express his outrage at the XM sickos in defense of this black woman, despite how this routine is so much worse than the Do

Better strap yourself in for a dose of alternate reality, for a rock legend has actually come out against Al Gore’s upcoming concerts to promote global warming hysteria.

THE WHO's ROGER DALTRY [sic] has blasted the big Wembley gig Gore is organising to raise awareness of global warming.

Shocked? There’s much more, although readers should be cautioned about imminent vulgarity in the quotes (emphasis added throughout):