Which major political party is based on getting free stuff from government? According to Esquire blogger Charles Pierce, it’s the Republicans. In a Tuesday post, Pierce argued that even though today’s movement-conservative-driven GOP claims to want a much smaller government, its true goal is to spend as much public money as possible to benefit right-wingers and as little as possible on programs that liberal Democrats favor.

Pierce made that point in defense of the so-called wheelchair ad from the Texas gubernatorial campaign of Democrat Wendy Davis. The ad, wrote Pierce, was “fair” and “strikes at the heart of what movement conservatism has made of the Republican party…Republicans have been able to justify the benefits they've received from government activity that they now oppose in theory and in practice. This is not ‘hypocrisy.’ That is too mild a word. This is the regulatory capture of the government for personal benefit [that] makes a lie, again and again, of the basic principles of modern conservatism.”

The Davis ad…strikes at the heart of what movement conservatism has made of the Republican party…[B]eginning with that epochal moment when Ronald Reagan said, in his first inaugural, that government was the problem…the Republican party deliberately has transformed itself from the Party of Lincoln to the Party of I've Got Mine, Jack…[I]ndividual Republicans have been able to justify the benefits they've received from government activity that they now oppose in theory and in practice. This is not "hypocrisy." That is too mild a word. This is the regulatory capture of the government for personal benefit. That it makes a lie, again and again, of the basic principles of modern conservatism -- indeed, that it shows those principles to be a sham -- is certainly worthy of notice and debate…Modern conservatism is not about making the government smaller. It's about making the government exclusive. It's not about streamlining the benefits of the political commonwealth. It's about making sure those benefits flow only to those people who have proven through their ability to work all the other levers of power that they deserve those benefits.

One of the clearest demonstrations of the contradiction came during the Republican National Convention in 2012, when the party gave one night of speeches over to the theme, "We did build that," a deliberate misinterpretation of something the president had said…But there was a curious thing about these speeches. A great many of them began with, "When my Dad got out of the Army..." There was the guy who built his business who never mentioned the small-business loans he'd obtained. There was Chris Christie, railing against the dead hand of big government while nearly sobbing over how important the GI Bill had been to his Dad…It was a night of organized bullshit so epic that it stands alone in my memory…It should have defined the Republican party for a generation. Hell, if it weren't for the New Deal, Ronald Reagan's father would have been the town drunk. Government wasn't The Problem then…Greg Abbott deserved that $10 million, but all the people taking advantage of the Americans With Disabilities Act don't deserve wheelchair ramps or curb cuts. It's monstrous. 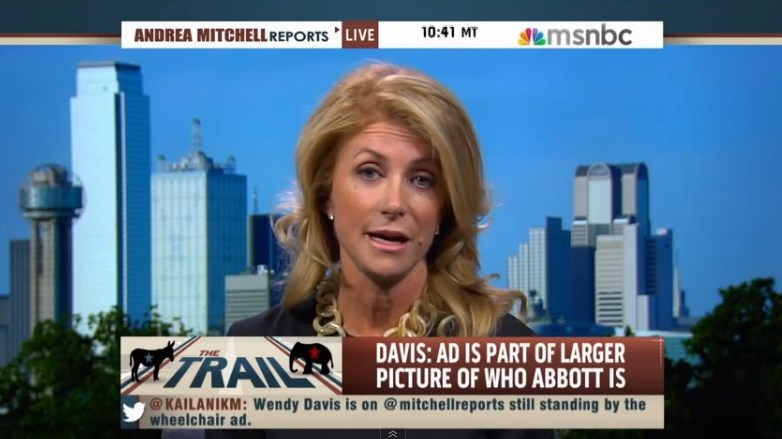 The contradiction never should have been allowed to grow this way. Clarence Thomas should have been defined by his hysterical opposition to the affirmative action programs that helped him get out of Georgia and into Holy Cross, and not by what he may or may not have said to Anita Hill…Paul Ryan should have had the Social Security survivors benefits that got him through high school and college hung around his entire political career and draped like an iron shroud over every dystopian "budget" he ever proposed…[S]ince the elite political press pretty much has chickened out on its job of highlighting how the entire modern conservative ideology is built on this kind of slippery manure, it's up to the Democratic party to do it…

Wendy Davis's commercial is not only fair, it's an important moment that needs to be replicated where applicable all over the country until the message sinks in. Either government is the problem or it is not. If it's a problem for the country as a whole, then it's also a problem in Greg Abbott's personal life, and he should have been more concerned than he was about those personal injury lawsuits that are clogging up the courts. After all, they're the real job-killers.