Liberal arrogance about global warming led the Style section of The Washington Post on Tuesday. “Climate deniers” were singled out with the headline “BLOWING SMOKE, WITH A SMILE: Corporate baloney peddlers, especially ones who deny climate change, are the target of Robert Kenner’s latest documentary.” The online headline said it “shines light on climate-change deniers.”

Post film critic Michael O’Sullivan wrote a badly disguised editorial applauding Kenner’s thesis that denying global warming is just like denying cigarettes are bad for you. And more: he compares “deniers” to Bull Connor and his segregationist thugs. 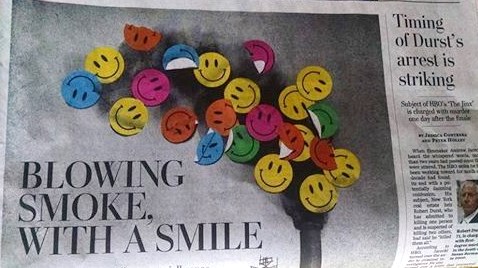 It’s “professional charlatanism” to claim there isn’t a “planet in peril” from global warming:

The germ of Kenner’s latest project, a simultaneously entertaining and inciting exposé of professional charlatanism — practiced, most saliently, by those hired to make the case that global warming isn’t real, or at least that there is no scientific consensus on it — sprouted in the director’s head during the making of [his anti-corporate documentary] Food, Inc.

“I went to a hearing on whether we should label cloned meat,” Kenner recalls. “There was someone there who stood up and said, ‘I think it would be way too confusing, for the consumer, to give them that kind of information.’ I thought, ‘I’ve never heard something like that before.’ It was the representative of some meat company. I looked up and thought, ‘Who could this be?’?”

“...It takes a lot of ... talent to do that,” says Kenner, pausing before the word “talent” just long enough to make a reporter think he’s about to say “cojones.”

He isn’t being entirely ironic. Kenner, 65, does admire people such as Marc Morano, a professional climate-change denier and founder of the Climate Depot Web site who is, arguably, the star of Kenner’s film. After a stint in the 1990s reporting for Rush Limbaugh, Morano worked briefly as a flack for Sen. James M. Inhofe (R-Okla.), who famously called global warming a “hoax.”

These days, Morano most often pops up on TV shows arguing against the science of climate change. In front of Kenner’s camera, Morano makes for a jocular — and weirdly unapologetic — advocate for what can only be called ignorance.

“I’m not a scientist,” he jokes, flashing a huge, telegenic grin, “but I play one on TV.”

Morano – a friend who worked at our sister site CNSNews.com for five years in the 1990s – is joking. He doesn’t present himself as a scientist on TV. Is O’Sullivan a climate scientist? Is Robert Kenner a climate scientist? But arrogant liberals assume every scientist in the world is on their side, so anyone who disagrees with the Left is pushing falsehood. “Truth” is all on the liberal side. 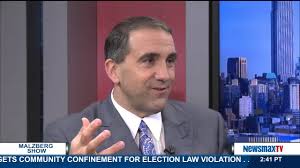 He also plays dirty. In [Merchants of] Doubt, Morano recounts with glee how he has published the e-mail addresses of climate scientists, subjecting them to intimidation and flaming attacks from anonymous critics. (Several of the abusive e-mails are read aloud in the film by their recipients, in an evocation of Jimmy Kimmel’s “Celebrities Read Mean Tweets” segments.) It makes for a semi-serious tone that masks Kenner’s more sobering message: We’re routinely being lied to, by people who are darn good at it.

O’Sullivan is so willing to be ridiculous that he pushes Kenner as someone in the “middle,” who is beyond the ideological boundaries:

The director’s Food, Inc. reputation may help. Although he doesn’t have the name recognition of, say, Michael Moore, Kenner’s earlier film cut across ideological boundaries. After all, everybody has to eat. Kenner takes pleasure in pointing out the irony of right-wing publisher Rupert Murdoch handing out 70,000 free DVD copies of Food, Inc. with his Sunday London Times in 2010.

At the same time, Kenner claims that he isn’t trying to convert anyone; he’s trying to reveal the hidden agendas of those who are. “People don’t like to be lied to,” he says.

There are a few recovering global-warming skeptics featured in Doubt. Most notable among them is the staunchly Republican former congressman Bob Inglis of South Carolina, who lost a 2010 reelection bid after acknowledging, in a radio interview, that he had come to believe in human-caused climate change. Like a prophet without honor in his own home, Inglis is shown preaching the gospel of climate change, to the derision of some of his former supporters.

The “gospel of climate change”? Well, the UN’s chief climate change officer did just say it was “his religion.” Then comes the part about how America needs to flush away “the last vestiges of climate resistance.”

But Kenner doesn’t care that other global-warming deniers are unlikely to buy a ticket to his film, let alone be converted by it.

He is optimistic that the last vestiges of climate resistance will one day be swept away, likening it to the sea change that has occurred over the past several years in popular attitudes about same-sex marriage and other once-contentious issues.

“Look at gay rights,” he says. “That was a set-in-stone issue, not only with right-wingers, but with liberals, too, as recently as 2008. Marijuana is another.” Tribes sometimes do get up and move, no matter how entrenched.

As Kenner sees it, on any issue, there are typically three groups: true believers; nonbelievers; and the vast, confused middle. It’s not the middle’s fault it’s confused: Kenner blames the Marc Moranos of the world, who are paid to sow not just doubt but fear. (“Fear is a big part of it,” he says.)

This is the real choke-on-your-Cheerios passage in this article. Fear is the number-one card played by Al Gore and every other secular prophet of a world on fire (and flooded as well).

The media share much of the blame. Kenner singles out newspapers — this one in particular — for his harshest criticism of what he calls their tradition of “false balance”: the insistence on always presenting two sides of an issue, even when there aren’t two.

“I think your paper is far less inclined to show deniers on the op-ed page these days,” he says. “That’s a big change, because they were being published continually. The fact is, that confused people, and that was a big part of the problem.”

According to Kenner, change will come, but not from those shouting at the edges of the argument. Rather, it will grow out of the confused middle, where films such as “Food, Inc.” and “Merchants of Doubt” shine light on hidden, and uncomfortable, truths.

That passage doesn't demand a rebuttal. It demands an apology. Or perhaps the Post can put its "Fact Checker" on the case: How is it factual to compare climate "deniers" to racists?

Having the Post describe me as a 'jocular' advocate for 'ignorance' is odd, considering I feature on Climate Depot the views of skeptical scientists like Nobel Prize winning physicist Dr. Ivar Giaever, who also appears in my upcoming film Climate Hustle. On Climate Depot, I publish interviews and will feature interviews in my film of renowned Princeton Physicist Freeman Dyson, Green guru James Lovelock, Ivy League U. Penn Geologist Dr. Robert Giegengack and many other prominent scientists. (See" Scientists converting to skeptics)

Under what criteria does the Washington Post Style section essentially call the skeptical climate views of world renowned scientists 'ignorant'?

As for me playing 'rough'. Over the years, I have occasionally posted the publicly available emals of professors at major Universities, available to anyone on their websites. I have never posted private emails. All sides of the debate get nasty emails. I hope the warmist professors can hear from the public.

The warmists have been upset that the public has reached out to them. Everyone in this debate gets hate mail:

Climate Depot’s hate mail of the day: Angry green rips Morano: ‘Thank you for being one of the biggest a**holes on planet Earth and for helping to doom every living ecosystem…Go f*ck yourself’ -- 'Maybe you do want to end life as we know it because you are fabricating lots of dirty worthless green numbers in some sick monopoly game. but lemme tell you buddy, you aint worth the ink to print them. Hope if feels good to play god'

Will Media Report this?! Hate mail goes both ways: Here’s an example that ClimateDepot.com received: ‘I hope they hang you and the rest of the stooges for the fossil fuel industry’

Hate Mail Sent to Climate Depot's Morano: 'Hi I just wanted to let you know what a god**** stupid lying idiot you are. I really hope you are someday put on trial before a world tribunal on charges of 'crimes against humanity'...You are an evil little f*** and you have your head so far up your a**, you can tickle your tonsils when you wiggle your ears. F*** you, 'moron-o'