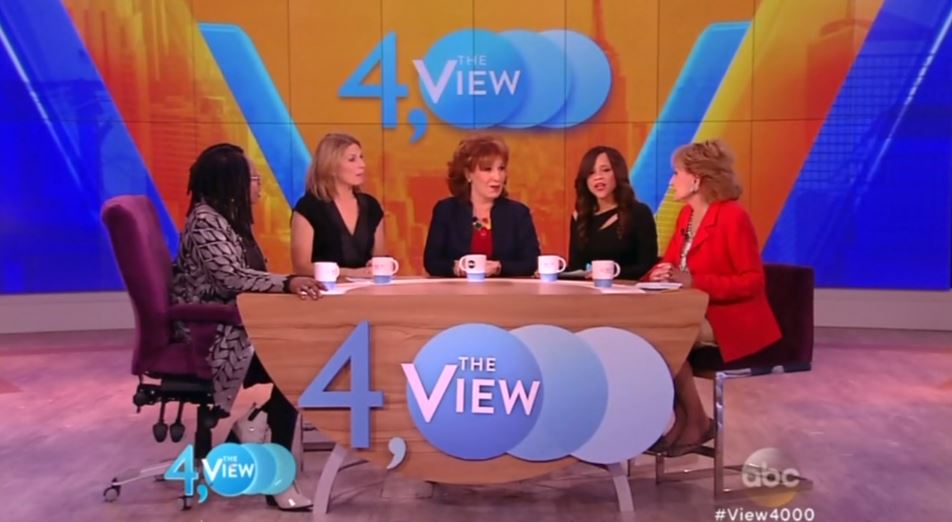 Retired host Barbara Walters on Friday returned to The View to celebrate the show's 4000th episode. The self-congratulatory edition featured Walters bragging, "We had some very serious political discussions. We had very serious guests. We had the president."  The co-host enthused, "When Obama came on the show that was a very big deal, a sitting president on the daytime show."

Joy Behar, a former host returned on Friday and praised the President's 2012 guest shot: "He knew that his constituents out there wanted to see him and he wanted them to vote him for. This is a good audience fo Obama."

As for the "very serious political discussions," there was the time Walters kissed the "superb" Joe Biden on the show.

There were the rants of 9/11 truther and two-time co-host Rosie O'Donnell, including spewing that "radical Christianity" is as dangerous in America as radical Islam.

Here are a few more examples of Walters and the show's "serious" discussions:

Barbara Walters: Well, what they said was on the one hand, it’s because he feels inadequate. But on the other hand it’s because he feels too adequate. You know? But on the other hand -- But on the other hand, because, you know, it’s somewhat deviant behavior. New York is -- I mean, we have the most wonderful mayor, and we have, I think, a terrific governor, but we do have some peculiarities. We have the former governor, Elliot Spitzer who --
Sherri Shepherd: With the call girls.
Joy Behar: He went to prostitutes.
Walters: Now, I said– I don’t know how to put it. I said that’s sort of in the realm of normalcy.
Lauren Sanchez: What?
Walters: Okay. Because it’s not kinky. It’s wrong, but it’s not kinky.
— ABC’s The View, July 30, 2013.

“He [Syrian dictator Bashar al-Assad] was a very intelligent, a well-informed, thoughtful - he spoke perfect English, wants very much to have relations with this country, has some solutions for ending the war in Iraq. She [Assad’s wife] was educated in England, worked in this country, speaks English the way I’m talking to you, lovely, intelligent. I don’t want you to say, people say, ‘Oh, you’re brainwashed.’ But that was not it. They just were very charming and intelligent.”
— ABC’s Barbara Walters recounting her trip to Syria on The View, July 7, 2008.

A partial transcript of the March 27 View show opening-segment is below:

JOY BEHAR: We were part of the Zeitgeist, as they say.

WALTERS: We had Barack Obama.

WHOOPI GOLDBERG: But the show wasn't about the guests. It was about the women at the table.

WALTERS: When Obama came on the show that was a very big deal, a sitting president on the daytime show and he said the reason he did was he thought it was important that he do some show his wife watches.

BEHAR: That's not the truth. That's wasn't the whole truth, Barbara. He knew that his constituents out there wanted to see him and he wanted them to vote him for. This is a good audience fo Obama.