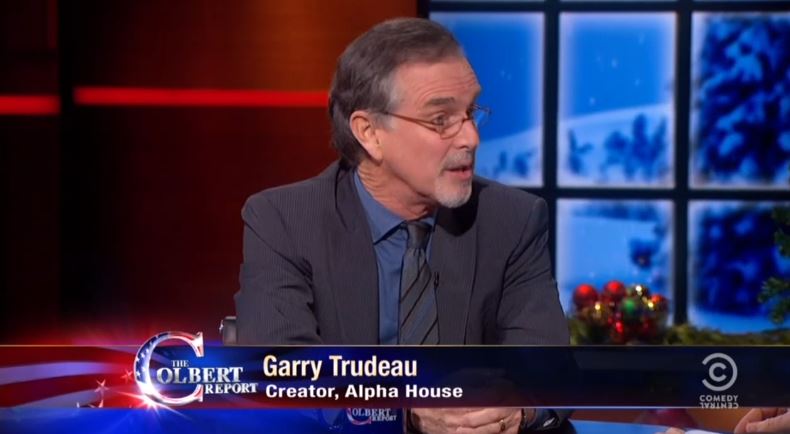 Talk about out of touch. Garry Trudeau, the very liberal creator of the Doonesbury comic strip, is defending his promotion of a now-discredited rape accusation at the University of Virginia. In the November 28th edition of the strip, a mother rails against the school, which was smeared by a story in Rolling Stone. She lectures her daughter, "Sam...You're not going to UVA!"

Citing the false accusations, the mother wonders, "Who is this frat boy monster who tells his victim that he 'had a great time'?" Trudeau defended his inclusion of the false claims in an interview with Slate:

“We’d hoped it would be obvious that the strip was written before Rolling Stone admitted problems in its reporting,” he emailed. “It’s not the first time I've been overtaken by events, and it won’t be the last—the occupational hazard of a long lead time.”

“Jackie’s story was not the focus, only the setup for commentary on institutional conflict of interest in adjudicating sexual assault, an issue that did not disappear with the credibility of the article,” he emailed.

In other words, the fact that a man and a university were falsely accused doesn't matter. Sonny Bunch of the Washington Free Beacon slammed Trudeau:

Here we are, almost a full month after the story has completely and utterly collapsed, Garry Trudeau has a character in a comic strip asking “Who is this frat boy monster who tells the victim he ‘had a great time’?” Well, that’s a tough one to answer, Garry. It’s a tough one to answer because, if we’re being honest with ourselves, he doesn’t exist. He’s a figment of a disturbed young woman’s imagination. A figment that you’re helping to propagate in your dreadful little cartoon that should’ve been put out to pasture 20 years ago.

Some papers opted to at least tone down Trudeau's repeating of a false accusation. The Washington Post, for instance, skipped the first two panels containing the reference to UVA.

In the Post, a defensive Trudeau explained, “If I had been able to make changes [to the comic], obviously I would have. No one deliberately creates opportunities for critics to change the subject.”

On February 24, 2014, Trudeau took a hiatus from Doonesbury, yet the Post has continued to run reruns for almost a year. As noted previously in NewsBusters, this is in stark contrast to other strips:

Instead of removing the strip from its pages, the Washington Post is running 41-year-old reruns. However, when the non-political Get Fuzzy comic took too many breaks, the Post simply axed it. On November 5, 2013, writer Donna Peremes derided, "At this point, 'Fuzzy' seems to be entering a zombie territory all its own. Out of the past 44 weeks up until we dropped it, 27 had been reruns."