The low-rated HBO series Newsroom returned on Sunday for a shortened, six episode run before limping to a series finale in December. The new season kicked off by examining the Boston bombing and forgiving CNN for botching a call.

In real life, CNN's John King erroneously reported that an arrest had been made in the terrorist attack. Liberal writer/director Aaron Sorkin excused the network by having his characters berate those who would cheer the mistake.  "ACN" network President "Charlie Skinner" (played by Sam Waterston) screamed at happy employees: "Worst moment in this guy's life and you're cheering?"

He added, "And if there's anyone in the world who should be able to empathize with CNN right now, you would think...that it would be the people in this room!" (This last reference is to a plot point from season two in which the characters were forced to retract a false story.)

Charlie lectured the reporters: "He [CNN's John King] got knocked down. You didn't get taller." 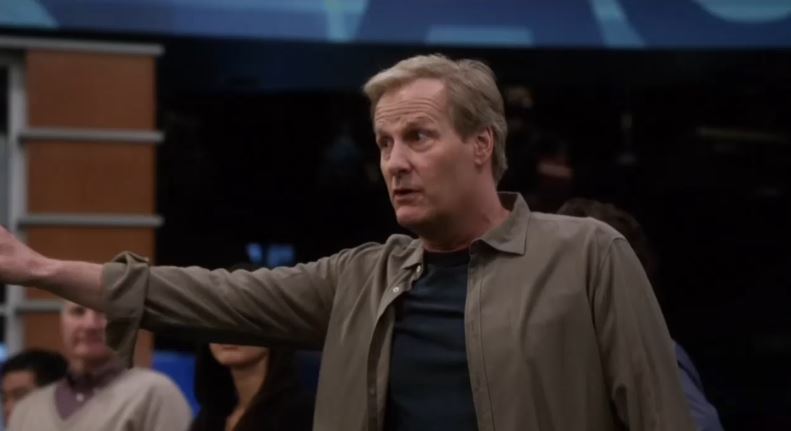 This humble, generous attitude contrasts to how Sorkin had "Will McAvoy" (played by Jeff Daniels) denounce the Tea Party in a 2013 episode. Making a comparison to the Taliban, he sneered:

Ideological purity. Compromise as weakness. A fundamentalist belief in scriptural literalism. Denying science. Unmoved by facts. Undeterred by new information. A hostile fear of progress. A demonization of a education. A need to control women’s bodies. Severe xenophobia. Tribal mentality. Intolerance of dissent and a pathological hatred of the U.S. government.

We should call them what they are: The American Taliban.

In another episode, McAvoy wondered why Republicans must hate gays, science and the poor.

The HBO program has also scoffed at the concept of liberal media bias.

A partial transcript from the November 9 episode is below:

CHARLIE SKINNER: What are you doing? Worst moment in this guy's life and you're cheering?

CHARLIE: Because you think if someone gets in line in back of you, it means the line moved?  We still blew Genoa.

CHARLIE: And if there's anyone in the world –

CHARLIE: –who should be able to empathize with CNN right now, you would think--

CHARLIE: – that it would be the people in this room!

CHARLIE: He got knocked down. You didn't get taller.

CHARLIE: Dodged a fucking bullet there.