ABC officially announced on Thursday that liberal actress Rosie Perez will join liberal comedienne Rosie O'Donnell and Sarah Palin-Basher Nicolle Wallace as the three new hosts of The View. The female-oriented chat show will now have no conservative voice for its 18th season, debuting in September.

In 2012, Perez campaigned for Barack Obama and starred in an ad bashing Mitt Romney. In the spot, she sneered, "Unfortunately for you, Mitt, you were cursed with the hard-knock life of growing as up the son of a wealthy governor and auto executive." The actress also appeared on Al Sharpton's MSNBC show in December of 2012. She fawned over the Democratic activist, enthusing, "It's an honor. I've been a fan of yours and respect you immensely." [See video below. MP3 audio here.]

In 2009, Perez appeared with other celebrities for HBO's We Are One: The Obama Inaugural Celebration at the Lincoln Memorial.

On June 7, 2013, the actress announced her support for a vicious commentary by MSNBC host Lawrence O'Donnell. O'Donnell trashed, "I am forced to remind Giuliani of how may firefighters were killed on 9/11 because of him."

Via Twitter, Perez cheered, "Speaking the truth about Giuliani's incompetence #911!"

In 2006, the entertainer derided abstinence education as "insane."

Perez will join 9/11 truther Rosie O'Donnell and former political operative Nicolle Wallace. Though a Republican, Wallace spends much of her time assailing conservatives and fellow GOPers.

Variety reported the additions on Wednesday: 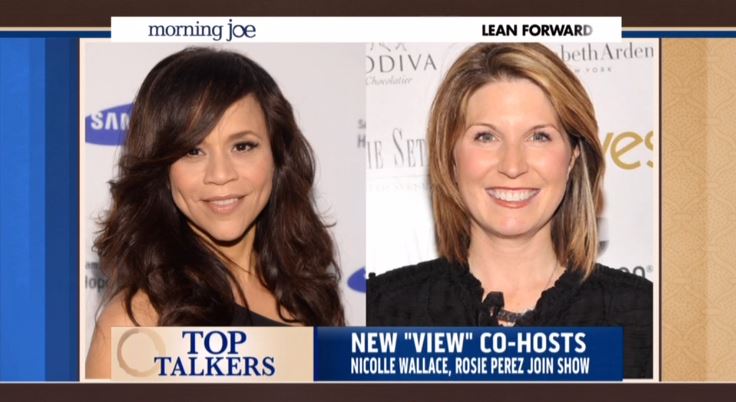 “The View” makeover is complete, as actress Rosie Perez and Republican PR vet Nicolle Wallace are said to be close to deals to join the ABC daytime talkshow alongside Rosie O’Donnell and Whoopi Goldberg later this month.

Perez (pictured left) and Wallace (pictured right) have done guest stints on the show as “View” underwent a top-to-bottom remodel that included everything from a revamped social media presence to key hires like “Rachel Maddow’s” exec producer Bill Wolff, after the departure of co-hosts Jenny McCarthy and Sherri Shepherd and Barbara Walters’ retirement in May.