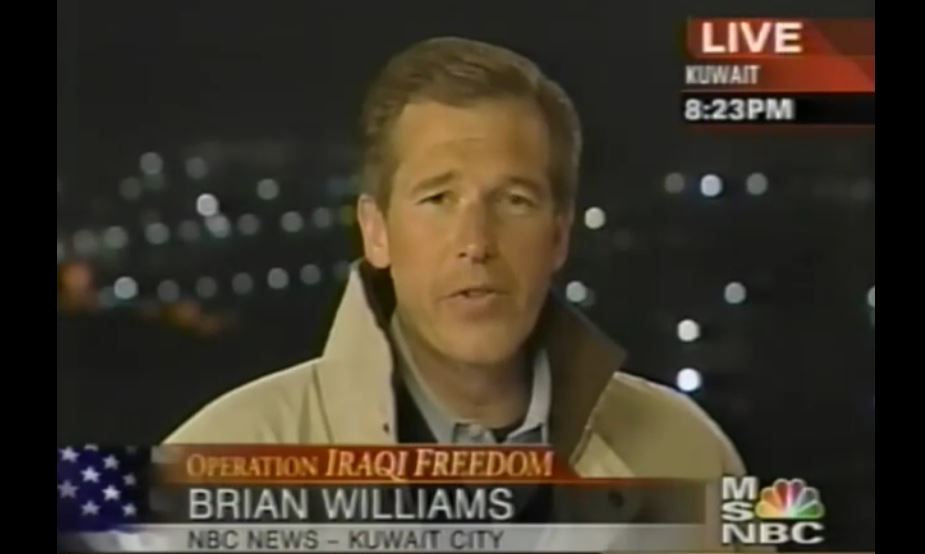 Just hours after returning to Kuwait after the his now-infamous helicopter incident, NBC's Brian Williams on MSNBC likened it to "Black Hawk Down meets Saving Private Ryan."

Of course, the real-life 1993 battle in Mogadishu, Somalia, that served as the basis of the movie "Black Hawk Down" involved the deaths of 18 American soldiers and capture of another American. There were no casualties on Brian Williams's helicopter, which he now admits never faced ground fire.

Here's the video followed by a short transcript of Williams talking with MSNBC anchor Lester Holt on March 26, 2003 during live coverage at 12:23pm ET (8:23pm in Kuwait City) talking about the incident:

LESTER HOLT: And, as you noted at the outset of your report, you believed this to be a milk run -- I guess something akin, maybe, to the Washington-New York shuttle. Was it a day trip, and to that, I'm curious, did you have provisions for three nights in the desert in a Chinook?
BRIAN WILLIAMS: It was a day trip. Only since I've been back and able to laugh about it did a friend of mine remind me, this was Black Hawk Down meets Saving Private Ryan. This was a very, very strange day trip.