Phil Griffin Claims MSNBC 'Has Never Had an Ideology,' But Fox News Does

During an interview with Lloyd Grove of the Daily Beast website, MSNBC president Phil Griffin strained at gnats when he stated that his network “has never had an ideology” but insisted that the dominant Fox News Channel does.

“An ideology is a single thought across all programs,” he said. “We’ve never had that.” However, Griffin asserted, MSNBC instead has “a progressive sensibility,” which he claimed is not the same as an ideology. “Obviously, I hire people who fit the sensibility” because “we do stay true to facts. You have to build your argument. That's why I call it a sensibility.”

He continued by saying:

If you’re a Democrat in trouble, we’re not a place where we’re going to rehabilitate you. You’re not going to get a free ride if you did wrong.

I think [the people at Fox News] do have an ideology because every Republican who’s in trouble goes on that network to be taken care of.

Nevertheless, Griffin praised his network's competition by stating that it's “owned by News Corp., which is Rupert Murdoch. Roger Ailes runs it, and he comes out of the Republican Party.”

“That’s fine,” he continued. “They’ve done an incredible job over there. They’ve been very successful. They drive a lot of the conversation.”

However, Grove stated that some Republican operatives and office-holders see MSNBC as a liberal-Democrat collaborator of the Barack Obama White House -- with a promotional catchphrase of “Lean Forward,” which echoes the slogan of the incumbent president's 2012 reelection campaign, which was simply “Forward.” Griffin quickly dismissed that concept.

Instead, he stated the currently second-place cable news network has reconfigured its daytime schedule, in which he has shuffled two established anchors -- Andrea Mitchell and Tamron Hall -- to make room for new hosts, Ronan Farrow and Joy Reid.

He described his new hosts as “bright and telegenic personalities, but largely unproven as viewer draws, who will launch their hour-long programs at 1 p.m. and 2 p.m., respectively, on Feb. 24.”

“There is a rhyme or reason to this -- it’s making the thread clearer from morning to night,” Griffin noted, explaining that the latest line-up is organized in three-hour blocks.

The first begins with Morning Joe, the supposedly bipartisan program that airs from 6 to 9 a.m., continuing with a block that runs from 9 a.m. to 12 noon with Hall newly installed at 11 a.m.

Mitchell's program will now air at noon and be followed by Farrow and Reid as “a more topical” bridge to an increasingly opinionated afternoon featuring The Cycle, a panel show, and Now With Alex Wagner. 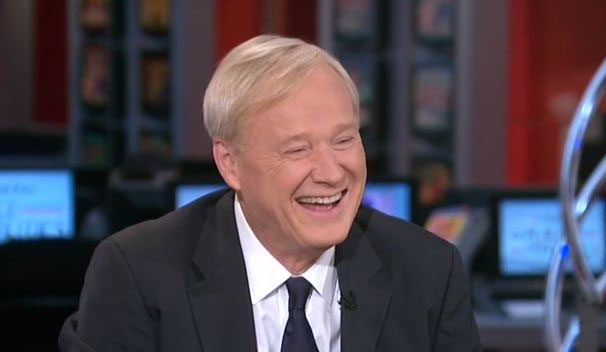 “Then you have the big voices of Ed Schultz, Rev. [Al Sharpton] and Chris [Matthews],” Griffin added, “and then the big deeper thinkers of Chris Hayes, Rachel [Maddow], and Lawrence [O’Donnell].” Grove joked the day become "increasingly commie" as the night went on. "I prefer not to describe it that way,” Griffin said with a laugh. “We get more analytical as the day goes on.”

In addition, he stoutly defended All In host Chris Hayes, a protégé of MSNBC’s prime-time anchor Rachel Maddow, even though Hayes’ ratings -- opposite Fox News Channel’s Bill O’Reilly and Cable News Network's Anderson Cooper -- had been what the liberal host himself called “bad."

“I’m committed to Chris Hayes at 8 o’clock,” Griffin said, noting that a recent reworking of the schedule has resulted in a stronger lead-in and marked improvement in Hayes’ numbers. “The line is straight up, and I couldn’t be happier with where we are,” Griffin insists. “I’m glad because I put him there.”

The interview took place at about the same time the moderator of MSNBC's official Twitter account posted a message on Cheerio's national advertisement, which focuses on a biracial family.

"Maybe the right wing will hate it, but everyone else will go awww: the adorable new #Cheerios ad w/biracial family,” he stated.

It didn't take long for the channel to delete the remark and fire the person responsible for it before apologizing to Republican National Committee chairman Reince Priebus, who had told his staff to refrain from appearing on any MSNBC program.

While discussing the network's recent problems with Alec Baldwin, Martin Bashir and Melissa Harris-Perry, Griffin almost prophetically stated: “We’re going to be totally transparent. If you make a mistake, you’ve got to address it, and we’ve done that throughout all the last six years that I’ve been here.”

Griffin responded by calling the tweet “outrageous and unacceptable” before apologizing to Priebus and “everyone else offended” by the incident."

The interview ended with the company president claiming that the Nielsen ratings for January put MSNBC in second place ahead of CNN in total ratings and the important demographic of adults from 25 to 54 years old.

Nevertheless, Griffin concluded: “It’s a knife fight for every viewer.”