Us Magazine Hit Hard by Canceling Subscribers After Palin Attack 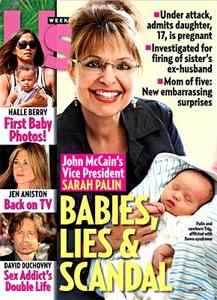 Courtney Hazlett over at MSNBC's "The Scoop" is reporting that thousands of "Us Weekly" subscribers have not only called the magazine to cancel their subscriptions -- some reports say up to 10,000 cancellations have occurred -- but have also contacted advertisers and expressed their outrage that they are advertising with the celebrity news magazine that would so blatantly try to destroy Governor Palin.

Hazlett is hearing that the editorial board of "Us Weekly" had thought they pegged it right that media pressure and attacks would see Palin pulled from the McCain ticket even before her debut speech. Because the media had so quickly swarmed to destroy her, they thought she was toast before she even had the chance to accept the nomination.

“When Us went to print Monday night, it looked like the ticket was falling apart," says one magazine editor. “They went to print thinking Palin was dead in the water, and their mistake was thinking everyone who reads Us is a Democrat, when they’re not. Readers are loyal, but the base of a political party is more loyal. They don’t need to read the magazine when there’s so much press around it to know to be upset.”

Reports vary that from 3,000 to 10,000 subscribers have canceled their subscriptions to the gossip mag scaring the pants off of the magazine industry. In a time when sales and advertising are both down, the magazine industry does not need this sort of imbroglio, for sure. Hazlett also reports that these many thousands of cancellations came before the attacks on Palin in "Us Weekly" were even printed and distributed.

Five thousand might not seem like a large number at first glance, but it’s significant in the context of Us’ printing schedule. The magazine goes to press Monday night, which means subscribers don’t receive their issues until Friday or Saturday. In other words, the cancellations are coming from subscribers who, in many cases, haven’t even gotten their hands on the actual issue.

This speaks to the arrogance of the left leaning media establishment. They were so darn sure that they could successfully destroy Sarah Palin that they counted their chickens before they were hatched. They assumed that by the time they printed and shipped their magazine, they would have succeeded in forcing McCain to boot her from the ticket.

They didn't know how tough Sarah Palin really was, nor how outraged their readership would be.

To appropriate a saying, arrogance goeth before the fall. And "Us Weekly" just took a tumble.