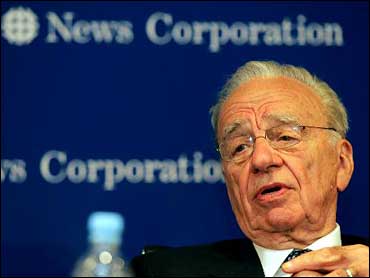 Over at Media Bistro's fishbowlDC blog Patrick W. Gavin was on hand to live-blog an appearance by News Corp's Rupert Murdoch who visited Georgetown University's Gaston Hall to talk about the shape of today's media landscape. As reported by Gavin, Murdoch had some interesting things to say. Among his comments was that we shouldn't have any fear that the media is becoming less free and.... oh, yeah... he claimed that CNN has "always been extremely liberal." (Gosh, who knew?)

Murdoch also commented on the state of TV and how it can no longer assume it can reach such a "mass audience."

"As a day to day reality, television can no longer rely on a mass audience. ... There is no magic bullet, no one size fits all solution. To stay ahead of the competiton, a media company needs to diversify geographically so it can reach more people. It needs to diversify by platform, which is one reason we bought MySpace and it needs to be constantly nuturing a new generation of businesses and business models to take place of the old."

This same warning can be delivered to the "dead tree media" of old styled newspapers. The "old model" will no longer work.

Murdoch scoffed at sniping at Fox and added that CNN has always been extremely liberal.

"It's very hard to be neutral. People laugh at us (Fox News) because we call ourselves 'Fair and Balanced.' Fact is, CNN, who's always been extremely liberal, never had a Republican or conservative voice on it. The only difference is that we have equal voices on both sides but that seems to have upset a lot of liberals. ... The more voices the better."

One wonders what CNN will be saying about this? It isn't like it's a secret, though. As polls are showing, fewer people every year see CNN as anything but shills for liberal ideologies. A few months ago the latest polls found that "by a two-to-one margin, Americans see CNN (44.9% to 18.4%) and MSNBC (38.8% to 15.8%) as mostly or somewhat liberal over mostly or somewhat conservative."

Murdoch also had an illuminative exchange with a member of the audience.

Questioner: "As a citizen, I'm scared. The free press used to be the corps of democracy. Please convince me that the world media consolidation in one hand is not a threat to democracy."

Murdoch: Says "absolutely" that would be the case, but "we are a tiny fraction of the media landscape. There are millions of voices out there and we certainly don't have any of that sort of monopolistic view. Everything we've done in my opinion is to create competition. We've started up against other people everywhere. All of our activities are competing with other people and we think that's a public servcice. We want to give people choices. The more choice there is, the better it is. ...[To think the media world is concentrating] is ignoring the facts. It is being fragmented in a milion ways. And I think that's good. It doesn't suit my business but... [Laughter]

Obviously this questioner has swallowed the leftist line that conservatives creeping into the media means that the media is no longer "free" and that he and his ilk should be "scared" that democracy is about to come to an end!

But, Murdoch is exactly right, here. This very website is a perfect example of the "millions of voices" that are now freed to make their ideas known in this country. How could we possibly have less freedom when more people can have their say? In fact, I'd suggest that the days when we had but a few major national papers and magazines and but three TV stations was the era that was less free.

So, with the advent of the new media, we have far more freedom of speech than ever before. But, as Murdoch focused on competition, that is a thing that the left hates. Their ideas need oppressive monopoly to stay preeminent and this is the biggest reason why the left slams Fox news for being "slanted" while they allow "news" sources that fit their own needs to slide by uncommented upon. They want that freedom quashed.

Of course, THIS is just what the left is "scared" about. They've lost their control of the press and this, to them, means all that is good is lost. And, I have to say... if what THEY have lost is all that is "good," we really were in serious trouble 20 years ago!

**Remember that all the quotes here is a result of the live-blogging of the source cited. The accuracy of the quotes is contingent on how well he paid attention!