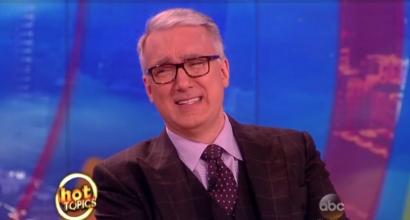 A current MSNBC personality just passed the half-decade mark as a host on the channel. A former MSNBC personality who’s made plenty of comebacks just made another one. The Washington Monthly’s D.R. Tucker praised each man to the skies this past weekend.

On Saturday, Tucker’s subject was Chris Hayes, whose weekend program Up had debuted five years ago to the day (Hayes moved to weeknights a year and a half later as host of All In). Tucker called Hayes “the classiest man on cable” and opined that from the get-go, he was brilliant, “an engaging, charismatic host whose mind moved faster than Usain Bolt’s legs…Hayes could take any issue and skillfully analyze it from multiple perspectives; he was scrupulously fair to both conservatives and progressives.”

And, in words likely to irritate NewsBusters readers of a certain age, Tucker asserted, “What Firing Line allegedly was in the 1960s and 1970s, Up actually was in the early-2010s–a vibrant and spirited forum where ideas were debated, examined, cherished.”

Tucker claimed that Hayes wants to heal both the planet and the intellect (bolding added):

Hayes recognizes that in both climate science and political science, there are tipping points. It’s possible that carbon pollution could become so extreme that it will be virtually impossible for humanity to avert the worst impacts of human-caused climate change; it’s also possible that a society could become so dumbed-down, so disinformed, so celebrity-obsessed, so contemptuous of facts that it essentially collapses into cynicism and chaos. Hayes has always been determined to fight back against both of these tipping points. He wants CO2 levels to be reduced and IQ levels to be increased.

On Sunday, Tucker, apropos of Keith Olbermann’s return to regular long-form political commentary as a special correspondent for GQ, gushed:

Progressives need their wonks, their activists, their philosophers, their organizers and their strategists–but they also need folks who know how to stand up and strip the bark off the right wing. No one–no one–is better at that task than Olbermann…