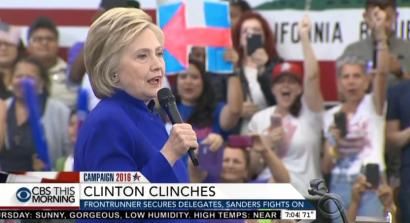 If Hillary Clinton takes Joel Dodge’s advice, one of Washington’s kings of unintentional comedy might be in the spotlight for a while longer. Dodge, a lawyer who also writes for The Week, thinks Clinton should choose current vice president Joe Biden as her running mate.

In his Monday column, Dodge discussed what he sees as the “significant downsides” of oft-mentioned VP possibilities such as labor secretary Tom Perez (“thin on campaigning and governing experience”) and Elizabeth Warren (the Republican governor of Massachusetts would pick her replacement in the Senate). He’s not much more enthusiastic about Tim Kaine, who’d “do little to rouse the electorate, either for good or ill.”

But Biden, contended Dodge, “is virtually risk-free and carries more upside…[He] is universally known, vetted, and unquestionably fit to serve. As America's affable ‘Uncle Joe,’ he is viewed positively by 51 percent of the country and unfavorably by just 36 percent. He's absolutely beloved by Democrats, helping to shore up the Sanders-Warren wing of the party. And he has already proven to be an able complement to a candidate who, like Clinton, sometimes struggles to connect viscerally and emotionally with voters. He also appears to absolutely love being vice president, and is good at the job.”

Dodge acknowledged that Biden “will turn 74 in November, which is fairly old for a vice president, particularly given Clinton's own age. But at 70, Donald Trump won't exactly offer youthful vitality, either. Moreover, keeping Biden for at least one term would give rising Democratic figures four years to season into stronger veep material before 2020.”

Besides, since Hillary’s embracing President Obama’s record, why not a holdover VP?

Conventional wisdom has it that after two terms in the White House, a party's nominee must create distance from the outgoing administration. But…there's no need for Clinton to run from Obama's popularity, and with her pragmatic approach to center-left policy change, she has already positioned herself as a continuation of his administration…

…Biden would reinforce Clinton's strongest claim to the Oval Office, doubling down on unparalleled experience while adding a warm blue-collar familiarity. [Bolding added.]

FWIW, the vice presidency is not term-limited, so theoretically Dodge’s proposal could come to fruition.