Reporters often get basic facts wrong and otherwise embarrass themselves when attempting to explain specifics about guns. This is what happened to Pete Williams at MSNBC Friday morning as he tried to describe shotguns in the aftermath of Thursday's Capital Gazette massacre in Annapolis, Maryland.

Williams said that a shotgun "sets out a spray of pellets" like a "reverse backwards funnel." Again per Williams, this means "you don't have to aim very precisely" to hit your target. He also claimed that "you don't fire a lot of rounds" with a shotgun.

The comedy began when MSNBC's studio host said that if Capital Gazette mass shooter Jarrod Ramos had used "an automatic weapon, there would have been even more casualties." Though technically true, it's prohibitively unlikely that Ramos could have obtained a fully automatic firearm, since "Legal transfers of such firearms are only for those made pre-1986." Additionally, all such transfers are heavily regulated by the ATF, and "New sales of automatic firearms are banned."

MSNBC HOST: A lot of people saying (that) if this had been an automatic weapon, there would have been even more casualties.

PETE WILLIAMS: Well I think that's probably true. A shotgun, if you're not familiar with a shotgun, it sends out s spray of pellets.

(Williams reaches forward with his arms and spreads them out widely.)

And because a bullet simply goes in a straight line and a shotgun is sort of like a reverse backwards funnel, it spreads it out, so that you don't have to aim very precisely. It can do a lot of damage to the people that you aim it at, but you don't fire a lot of rounds with a shotgun. So I think that has something to do with it.

And it (the gun) was purchased legally. And remember, the conviction that he had was a misdemeanor. And under federal and I believe Maryland law, you would only be disqualified from buying a firearm if you've been convicted of a felony or a misdemeanor domestic violence conviction. This did not fit that category, and that's why he was able to buy the weapon legally.

Determining how flawed Williams' presentation was required very little research and one confirming conversation with a knowledgeable source. 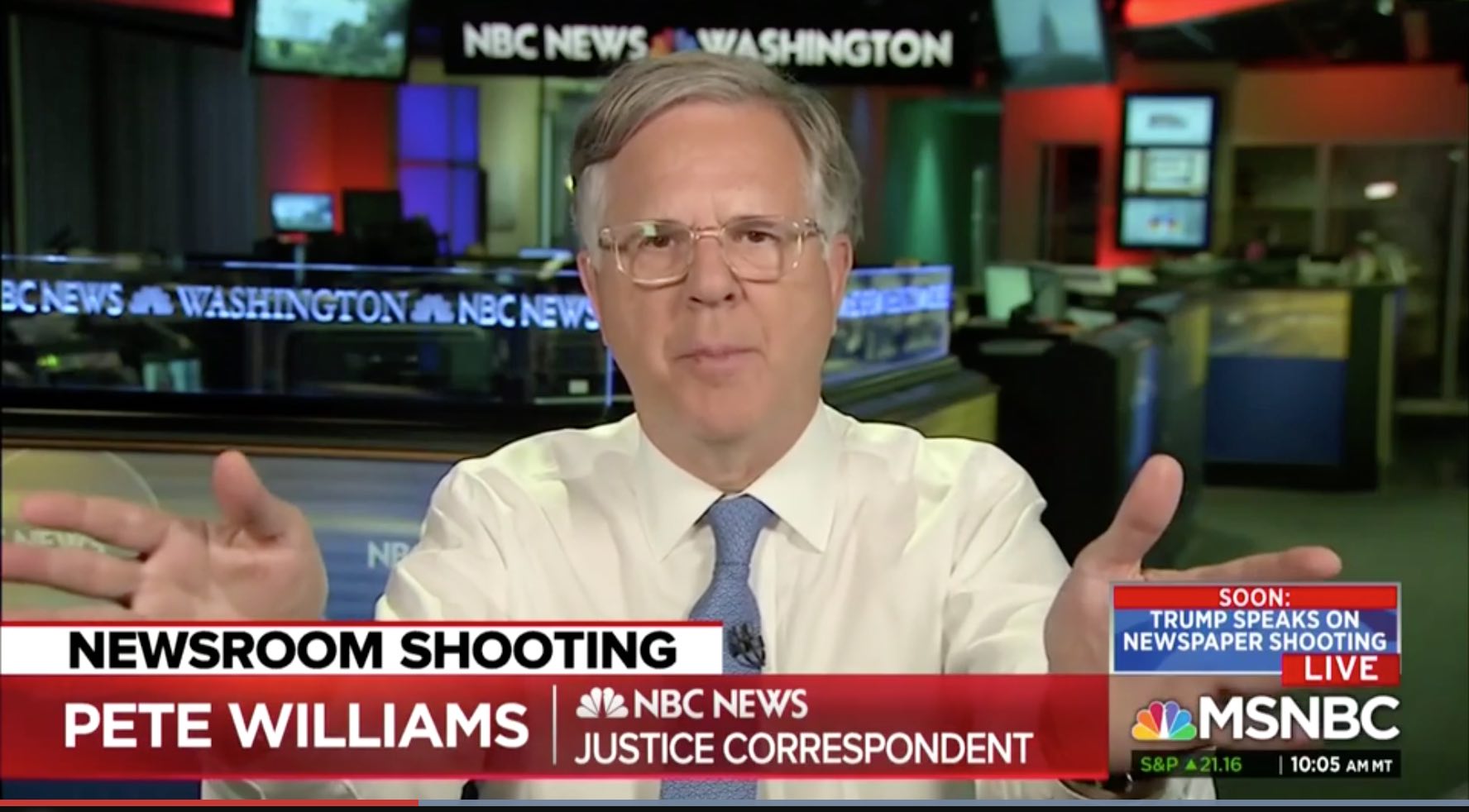 Depending on make and model, based on information presented here and here, a shotgun's spread is between 2.5 and 6.4 inches at 12 feet, which really means between 1.25 and 3.2 inches on either side of a targeted point. In percentage terms, that's 0.9 percent to 2.2 percent on either side of the target. (The lowest of five figures and percentages seen here resulted from a controlled experiment.)

That's not much diminished accuracy at a likely distance Ramos was from those he killed or injured.

The pump-action feature is tragically useful for someone whose aim is to quickly kill as many people as possible, because:

The cycling time of a pump-action is quite short ... It has also been noticed that the time taken to work the action allows the operator to identify and aim on a new target, avoiding a "spray and pray" usage.

Many reporters become intensely annoyed when criticized for their lack of basic gun knowledge. Instead of spending a little time on research before spouting off inanely with nonsensical terms and inaccurate descriptions, they've taken to attacking critics for "gunsplaining," complaining that they "use jargon to bully gun-control supporters" (which also means "most reporters").

This attempt to shut down informed conversations about guns would be analogous to ridiculing a stock analyst who wants to talk about troubling elements in a company's financial statements as engaging in unnecessary "accountsplaining."

Reporters resorting to going after critics for "gunsplaining" are basically telling the public, "Yeah, we're ignorant about guns, but we don't care, and we're proud of it."