No Coincidence: Out-Migration Is Highest in 3 Deep-Blue States Complaining the Most About the Tax Law

Early Thursday afternoon, Brad Wilmouth at NewsBusters posted on clueless Alisyn Camerota's morning interview of New York Governor Andrew Cuomo on CNN. After Cuomo whined about the new federal tax law's $10,000 limitation — not an "elimination," as he falsely claimed — on state and local tax deductibility, he contended that New York and California are the nation's "economic engines."

There is some truth in that, but how long can that continue if so many productive people continue to leave those two states?

One of the most consistently under-reported economic stories of the past two decades is how millions of Americans have left high-tax, high-regulation blue states for what they believe are better lives in lower-tax, lower-regulation red states. New York is Exhibit A in this regard, closely followed by California and the fiscal basket case known as Illinois. 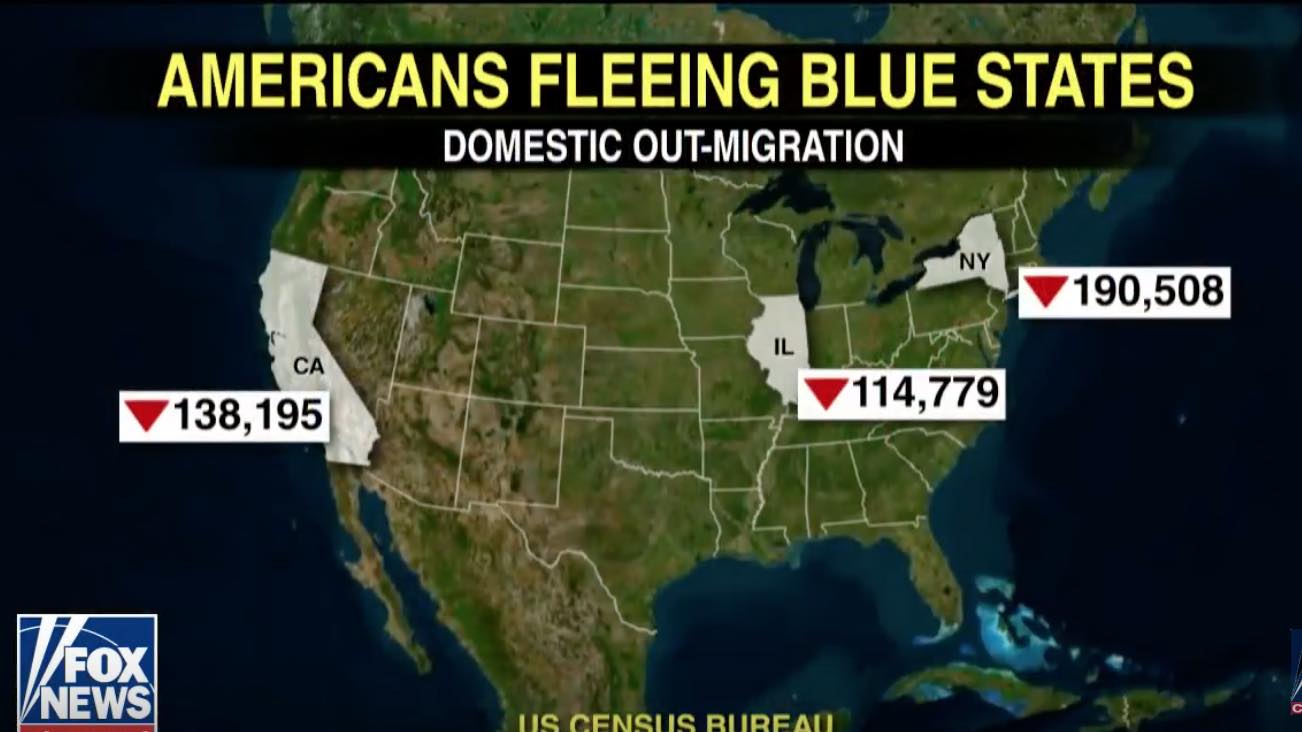 It's no coincidence that politicians in the these states (NY, CA, IL) are screaming the loudest over the new tax law (HT Daily Signal; bolds are mine throughout this post):

According to the Tax Foundation, New York, Illinois, and California had three of the five highest tax rates expressed as a percentage of per capita income, with residents paying 12.7 percent, 11 percent, and 11 percent, respectively (based on 2012 data, which is apparently the most recent data available. — Ed.).

The Empire State, after seeing a breathtaking 1.6 million residents leave the state from 2000-2007, has continued losing people at an alarming rate:

New York lost another 190,508 residents to other states during the year ending last July 1, bringing the state’s total domestic migration change since 2010 to a net loss of more than 1 million people, according to the U.S. Census Bureau’s annual population estimates.

The state’s “net domestic migration” loss in the latest 12-month period is roughly equal to the total for 2015-16. New York’s outflow of 1,022,071 people since the 2010 decennial census has exceeded any other state’s, both in absolute terms and as a share of population as measured by the 2010 census.

... New York has been losing residents to other states since at least 1961, the earliest year for which data are available ...:

The consistent exodus of residents seen during more than a half-century of the big-government, tax-and-spend model clearly hasn't chastened Empire State politicians — Democrat or Republican — one bit.

Looking at all of New York understates the impact of the Empire State's exodus outside of the New York City metro area, as seen in census date from 2000, 2010 and 2016:

Metro New York City's population within New York State has increased by 6-1/2 percent in the past 16 reported years, while the rest of the state has seen an increase of less than 1 percent and a decline during the past six. The Metro NYC result, at less than half of the 14.5 percent result for the entire U.S., is hardly stellar, but the population stagnation in the rest of the state has been disastrous.

New York has had Democratic Party governors since 2006, during which time all of the state's population gains have been in Metro New York City.

The population stats give away the fact that Andrew Cuomo and his two predecessors are and were more interested in being the Governor of Metro New York than in being governor of the entire state. As to Cuomo, all he has done for the rest of the state is ban hydraulic fracturing for no sound reason and initiate a corrupt economic development program which accomplished almost nothing (unless one is impressed by creating 408 jobs in two years).

The California exodus has also been a long-term affair, though an influx of new immigrants has masked the problem. The most recently reported year during Governor Jerry Brown's tenure has been no different:

California was the third deep blue state to experience significant domestic out-migration between July 2016 and July 2017, and it couldn’t blame the outflow on retirees searching for a more agreeable climate. About 138,000 residents left the state during that time period, second only to New York.

However, because California was the top receiving state for international migrants, its net migration was actually 27,000. Add to that number a “natural increase” of 214,000 people, and California’s population grew by about just over 240,000, according to the Census Bureau.

California leads the nation in the percentage of its population on traditional welfare (40 percent of all recipients in a state with 12 percent of the nation's population), as well as money spent on illegal immigrant education, health care and other benefits ($25 billion per year, as reported in February). No wonder so many people — and companies — are leaving the state.

For all of New York's and California's problems, Illinois may be in the worst shape:

Long-beset by twin budget and pension crises and the erosion of its tax base, Illinois lost so many residents that it dropped from the fifth- to the sixth-most populous state in 2017, losing its previous spot to Pennsylvania.

Just under 115,000 Illinois residents decamped for other states between July 2016 and July 2017. Since 2010, the Land of Lincoln has lost about 650,000 residents to other states on net, equal to the combined population of the state’s four largest cities other than Chicago, according to the Illinois Policy Institute.

Illinois’ domestic out-migration problem has become a nightmare for lawmakers, who must find a way to solve the worst pension crisis in the nation as the state’s tax base shrinks year after year. Illinois’ Democratic-dominated legislature has tried to ameliorate the situation with tax hikes, causing even more people to leave and throwing the state into a demographic spiral.

California and New York, particularly New York City, also have the most serious homelessness problems, and are arguably the worst examples of what the left supposedly decries the most — income inequality.

I would suggest that if one wants to see fully revved "economic engines" that are benefitting their entire populations instead of the select few, a visit to Texas or Florida would be the ticket. It's hardly a coincidence that these two states have no income tax and are attracting new residents fleeing high-tax states on a daily basis.

Based on the reactions to the new tax law seen in New York, California, and Illinois, that influx will continue — and will likely include many of those states' highest income-earners.