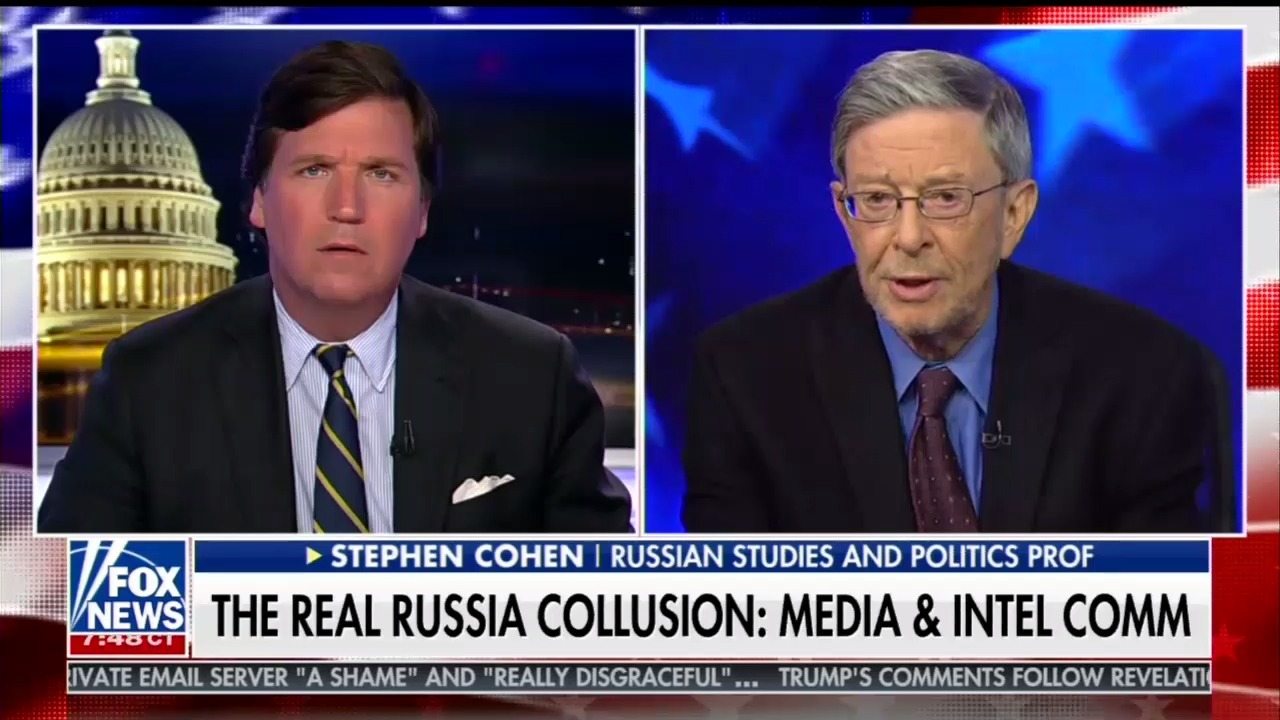 On Friday, Fox News's Tucker Carlson interviewed Stephen F. Cohen, a contributing editor at The Nation. Cohen sharply criticized coverage at the Washington Post and the New York Times, and more generally stated that he has "never seen media malpractice" like the establishment press's year-long effort to breathe life into what he insists has been a completely ginned-up claim that Russia tried to influence the 2016 U.S. presidential election.

Given that it has leaned hard-left during its entire existence, it might stun readers here to know that Cohen, who is married to magazine editor Katrina vanden Heuvel, strongly believes, based on what he claims is his own extensive research, that there is no evidence of Russian U.S election influence.

Readers should keep in mind, as they view and digest Cohen's contentions, that they, if true, completely refute the "fact-checkers" at Politifact, who have decided that "Russian election interference is a 'made-up story'" is 2017's "Lie of the Year."

Politifact, which concedes that "It seems unlikely — though not impossible — that Russia interference changed the outcome of the election," contends that "one man" — President Donald Trump — "keeps saying it didn’t even happen," strongly implying that Trump is all alone in his belief. That's wrong — and Cohen is on Politifact's side of the aisle.

Carlson began by pointing to the print edition version of a Friday Washington Post story. The print story, which has a different headline ("How Trump's pursuit of Putin has left the U.S. vulnerable to the Russian threat") from the online version ("Doubting the intelligence, Trump pursues Putin and leaves a Russian threat unchecked"), has a subhead — "Hacking Democracy" — which assumes facts Cohen contends are not in evidence.

The full video segment from the show is here. The first excerpt which follows begins after Cohen was introduced, and deals with that Washington Post item:

TUCKER CARLSON: So I'm reading the Washington Post today, which is the Jeff Bezos publication. And right on the front page, there's a piece about Russia. And the subhead says here, "Hacking Democracy," as if it is a known and universally accepted fact that our democracy was, quote, "hacked."

Do we know that?

If you read on in the Washington Post story in the first paragraph, they go back to this claim that it's the consensus of intelligence agencies. So it's simply not true.

I have to say that in addition to being a professor, for a long time I was also a paid consultant of a major American television network. I admire mainstream media. I learned a lot. But I have never seen media malpractice like this before in my life.

What that constitutes is essentially making allegations for which there is no verified facts, information, or evidence, and then basing your commentary on it.

So briefly put, it said that somehow Trump has been compromised by Putin, the leader of Russia. Then, when Trump does diplomacy with Putin, the New York Times literally calls it "treason." I haven't seen anything like this before.

The next video below contains two snips. In the first, Cohen reacts to the press's heavy reliance on leaks in the absence of substance, and notes the heavy irony in the left completely switching sides on the intelligence agencies' presumptive credibility. In the second, Carlson directly asks Cohen if he seen any evidence of Russian attempts to influence the 2016 election:

COHEN: ... A leaker, by definition, has a political agenda. We'd agree on that, right?

COHEN: You may not be old enough to remember, but I remember when the media, and particularly the liberal media, was deeply suspicious of intelligence agency sources.

COHEN: And now we have a situation where they seem to be the Holy Writ. If they whisper it to you on the telephone, it's true, and you print it.

CARLSON: ... Do we have and have you seen any evidence at all that the Russian government materially affected the outcome of the 2016 election?

COHEN: I have heard you say repeatedly there is no evidence. I've looked harder than you have. I've looked here in America, but I also have looked in Moscow. I mean, when I am there, as people I know, and yes, I confess, I do know people who are or have been Russian intelligence agents. I haven't found anybody in Moscow who believes this story.

Cohen has been consistently critical of media conduct and the Russian narrative for months. Headlines at a few of his recent columns at The Nation include the following:

How utterly fascinating it is that a longtime leftist fellow traveler at one of its furthest-left publications completely disputes the Washington Post's "Hacking Democracy" assumption, and insists, in the face of Politifact's contention that there is "a mountain of evidence" supporting Russia's alleged attempts to influence the 2016 U.S. presidential election, that there is none.