The shocked faces at NBC and in the media last week claiming "nobody knew" about Matt Lauer's harassment and abuse of women became impossible to believe Tuesday evening.

That's when Brian Flood at Fox News, partly cribbing from a still-available October 2008 story at the Village Voice, revealed that a celebrity roast that month in Lauer's honor "left little doubt that Lauer’s colleagues (and those in attendance — Ed.) knew NBC’s biggest star had a troubled marriage and a wandering eye."

The Voice's account of the event also serves as an especially revealing and depressing window into the lack of values and the sick sense of "humor" among the elites in entertainment and the media — and that was nine years ago.

The event was supposed to be super-secret, with no cameras or recording devices allowed. The Village Voice's Tony Ortega got around that by writing down "the dirtiest jokes on a notepad under the table." For the historical record, we're glad he did, though many reading his full report may feel the need to take at least two showers after doing so.

Last week on MSNBC's Morning Joe, according to Flood (link is NSFW, though nowhere near as graphic as the Village Voice item):

... (host Joe) Scarborough attended the roast but said he left early, feeling uncomfortable, brought it up on “Morning Joe.” Lauer’s peccadillos, he said, were not just known about. At the roast, they were celebrated.

“The whole theme was that he does the show and then he has sex with people, with employees,” Scarborough said. “So was this whispered behind closed doors? No. It was shouted from the mountaintops and everybody laughed about it.”

It would be interesting to see if Ortega recalls Scarborough's early departure.

Here is some of what Ortega reported (the link is definitely NSFW; readers should visit it at their own risk and outside of work; the excerpt below, which is cleansed of direct profanity, represents just about all of what can be pulled without deeply offending readers who'd rather not go to the link; bolds are mine):

... Roker then introduced Martha Stewart, who looked pretty out of place at a Friar’s Roast. The closest she could get to raunch was saying that “I hear NBC executives call Matt the ‘C*** of the Rock.'” 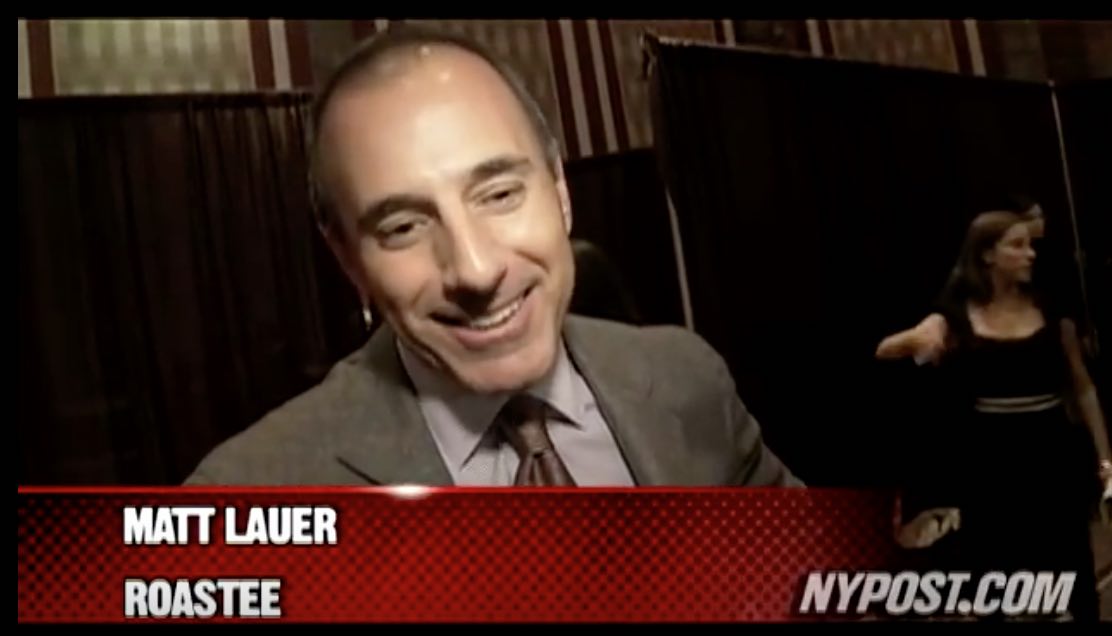 If she was tepid, Meredith Viera more than made up for it. Lauer’s Today costar started right in with, “That m*****f***** Matt Lauer,” and got a big laugh.

“I am amazed that I have time for this stupidity,” she said, pointing out that she does the Today show, Who Wants to be a Millionaire?, has three kids and a husband, and that’s a lot of balls to juggle.

(At this point, the spectacle of a TV personality doing this kind of material had the room of 1,900 rolling.)

That's as much as I can safely excerpt, but this is a good stopping point anyway.

1,900 people were there, and we're supposed to believe that the media and entertainment worlds were shocked when Lauer got fired last week and the stories continued to pile up after the announcement?

Kurt Schlichter at Townhall pegged matters perfectly on Monday in the midst of delivering digital body blows to the establishment press (italics are his):

They think we owe them respect and trust when all they’ve earned is our contempt.

You have Matt Lauer, probably America’s most highly-paid journalist, who “everyone” knew was a skeevy weirdo who’d probably creep out Woody Allen. Well, everyone did know, except us, the media’s audience. Our media overlords didn’t think we needed to know that little bit of information. ... when the flagship anchor of the flagship show on the flagship broadcast network uses his powers to basically build a sex dungeon in 30 Rock – nope, not news. Shhhhh. Matt’s just bein’ Matt. Move along. Nothing to see here. For gosh sakes, look at how much he hates the NRA!

Here are a few additional paragraphs I can safely excerpt from Flood's report at Fox:

Embattled NBC executives have been falling over themselves insisting they had no idea about Matt Lauer’s pervy past. But if anyone doubts that New York’s media elite was aware of Lauer’s reputation, they should look no further than a top-secret “roast” of Lauer that took place in October 2008.

... The 2008 Friars Club roast took place at the New York Hilton and was attended by everyone from future President Donald Trump to TV legend Norman Lear to a constellation of New York’s media elite including Brian Williams, Diane Sawyer, Nancy O’Dell and Howard Stern. Also on hand were numerous top executives from across the business and almost everyone who was anyone at NBC News. Fox News has confirmed many details of the roast with a media executive who attended ...

... “Today” co-host Al Roker was the “roastmaster” and Tom Cruise (who had famously feuded with Lauer on air over Scientology) made peace with a surprise appearance as a guest roaster. But while Cruise kept it relatively PG-13, once he finished, jokes focused on Lauer’s in-office sexcapades.

... the twice-married Lauer ... (joked) about sleeping with female contemporaries.

“What’s with all the small-d--- jokes? It was fun to look over and see Ann Curry laughing… like she doesn’t know how big my d--- really is,” Lauer said, wrapping up an event that The Village Voice called “three hours of d--- jokes.”

... Memories of the roast must be especially awkward for the various NBC executives now claiming they had no idea about Lauer’s reputation for sex harassment of women.

“This was a comedic roast, but there was clearly a vein of truth running through all those jokes,” said a media executive who was in attendance.

Of course there was. That's what genuine comedy — raunchy or not — needs to generate laughs, even with a receptive audience. But it's pretty safe to say that most of the rest of the country isn't laughing right now.