On December 22, roughly eight hours before Anis Amri was killed by Italian police, Bouazza Ben Bouazza at the Associated Press published an item portraying the Berlin truck massacre attacker who killed at least 12 and injured almost 50 others as a "troubled" man who came to Europe "in hopes of a better life," but "fell into crime instead."

Later text completely refutes those opening claims, and the AP reporter provided no explanation as to why such obvious contradictions are present.

Here's the headline and opening paragraph at Bouazza's Thursday dispatch (HT Gateway Pundit; bolds are mine throughout this post):

Desperate and drifting, Anis Amri took the path trodden by countless other North African teenagers: an illegal boat journey to Europe in hopes of a better life. He fell into crime instead - and is now suspect No. 1 in the deadly Berlin truck rampage claimed by the Islamic State group.

But later paragraphs reveal that Amri was already quite experienced at committing crimes before he came into Europe. Additionally, once he arrived, he committed the kinds of crimes one doesn't just "fall into" because of the need to survive:

... After dropping out of school in eighth grade, Anis Amri drank and fell to petty theft, his mother said. 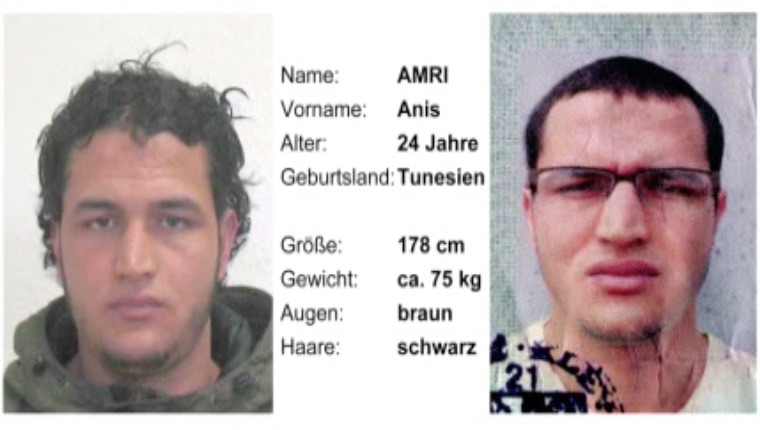 "His father and I are disabled. So he was forced to steal to emigrate and get ... goods that young people dream of," she said.

... Amri was convicted of stealing a truck in Tunisia and of burning down a migrant center in Italy, his mother said. But he was able to work small jobs while in an Italian prison, and sent money home. Italian authorities called him a problem inmate who had to be transferred to six different Sicilian prisons for bullying other prisoners and trying to spark rebellions.

"When he got out, he called us to say that he could not find work, and he was leaving for another country," his mother said. He tried and failed in Switzerland, so went to Germany instead.

Somewhere along the way, he appears to have been radicalized.

Yeah, that happened. After Amri was inadvertently located and killed by an Italian policeman early Friday morning, Bouazza's AP colleagues at the AP reported the following:

... The Islamic State group has claimed responsibility for Monday's attack. On Friday, it noted his death in Milan and released a separate video showing Amri swearing allegiance to the group's leader, Abu Bakr al-Baghdadi, while vowing to fight non-Muslims.

The video, which appeared to have been taken by Amri himself, showed him on a footbridge in northern Berlin, not far from where the truck used in the attack was hijacked. It was not known when the video was taken.

The AP and most of the rest of the press has been predictably reluctant to report several pertinent facts surrounding Amri. Here are just a few, with the few instances of genuine reporting originating, as is so often the case, from outlets in Great Britain.

When he left prison in Italy, "ISIS recruiters offered him protection before convincing him to sneak into Germany as a Syrian refugee, a source within Tunisia's anti-terror police revealed."

While the press, including AP (calling it a "bungled chase"), is aghast at the poor security which allowed Amri to get to Italy through France after his truck massacre at a Berlin market, almost no one has noted that he was allegedly seen at a nearby Berlin mosque "just eight hours after driving a 25-ton lorry into a crowd at a Christmas market."

Since most of the world's press isn't reporting the mosque visit, it also isn't reporting that two men were later arrested there. Resisting fiercely, they "wrestled with police, shouted expletives and lashed out at journalists and members of the public as they were bundled away." It's not unreasonable to believe that Amri's flight may have been facilitated with false travel papers, money and other items provided at the mosque.

The "somewhere along the way" where Amri was radicalized occurred during his time in the Italian prison system — according to his father, "He spent four years in jail in Italy where he met extremist groups which attracted him."

But the real bias attention-getter here is the AP's attempt to whitewash Amri's life in its headline and opening paragraph — perhaps in the interest of not alarming those who only look at headlines and perhaps opening paragraphs in print or on smartphones and other devices — while shamelessly and completely contradicting itself in later ones, and, from all appearances, acting as if nothing is out of order.

Quite the contrary. The AP report by Bouazza is truly disgraceful.